The Mid-City Community Fridge opened up on July 6, and quickly inspired the spread of free fridges throughout Los Angeles. (Spectrum News/David Mendez)

LOS ANGELES – When July began, even the idea of a community refrigerator — a place for neighbors and community members to share and store food with one another — would’ve seemed like too much for most Angelenos, especially during a pandemic.

Now, before July’s halfway mark, three such refrigerators will have come online in the span of a week. All are connected by L.A. Community Fridge, a network that’s rapidly built itself up through social media, and tapped into the culture of volunteers providing food to people who are houseless or food-insecure in Los Angeles.

Ryan Hoyle of Play Nice LBC, a vintage sporting goods boutique near Alamitos Beach, is ready to flip the switch on his store’s own community refrigerator. A Black-owned business, opened in 2018, Play Nice has built itself into a community center; the store has hosted voter registration drives, financial literacy events, and gallery events for local artists. It’s a shop owned by Long Beach natives on a mission to enhance their community.

Hoyle reached out soon after he saw Community Fridges Los Angeles posts on Instagram. He was impressed with how quickly it responded, and the level of organization that's already been established, all through group chats and constant communication. It fits perfectly with his own shop’s mission of influencing the community from within

“I really think that when the community is able to come in and say, 'Hey, we’re going to support and sustain ourselves,' that’s empowerment,” Hoyle said. ‘We don’t necessarily need people from ‘the top’ giving to us and handing out and coming to our relief as a savior. We have what we need to help each other out, and that’s wonderful.”

The first refrigerators went online on July 6, in Mid-City LA, near the intersection of Washington Boulevard and La Brea Avenue. They sit in the driveway of a home owned by Reach for the Top, a Venice-based transitional housing non-profit. 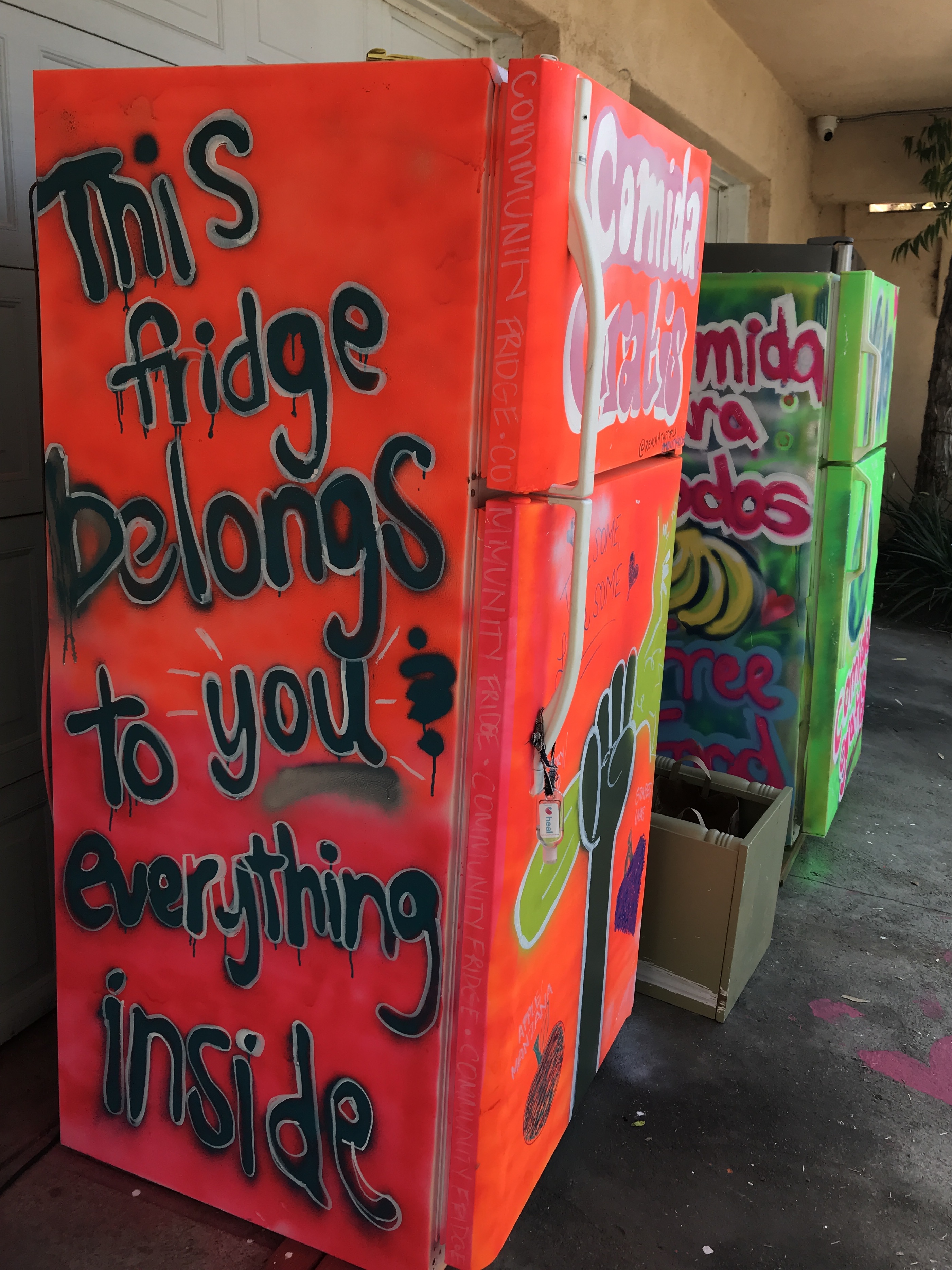 “We’re not trying to be saviors, we’re just members of the community helping each other out,” said Marina Vergara, a Community Fridge Los Angeles organizer. “People here are just walking over and dropping off extra groceries, an extra tomato or whatnot. It’s a grassroots, community-level mobilization to support those that are really in need.”

The fridge was a hit before its first day had wrapped. It had received donations from Ayala Farms, a small, family-owned farm from Oxnard that’s typically found at farmers markets around L.A., and California Island Market, a Highland Park-based community supported agriculture project that sells fresh, seasonal produce to people directly from farmers.

Stormy Art, of California Island Market, said that as the pandemic has forced people to stop going to restaurants, farmers have suffered and food has gone to waste. California Island Market has then become a gleaner, collecting the unsold produce from farmers markets and working with other organizations. “We do a lot of grassroots, underground stuff like that,” she said.

“I was scrambling to find homes for the meals and I just remembered that they had followed me,” Acedera said. She reached out to its organizers, and it was a perfect match.

For years, Acedera toyed with the idea of establishing a community fridge, but found few people willing to buy into idea. But in late spring, a series of community fridges began to spring up in New York City, and the concept went viral. “Now, with everything happening, I’m happy that other community members have started it,” Acedera said.

A Community in Need

Ernst Oehninger might be a vanguard of the community refrigerator movement in the United States; an incoming lecturer at UC Davis, he’s an organizer of Freedge, another network of community refrigerator operators. He began talking about free fridges in 2012 in Europe, before coming to the U.S. to study, and watched as food sharing projects exploded across the continent and world.

“It’s a time where the U.S. is finally getting it,” Oehninger said. “The movement goes beyond charity. It’s about caring about the community through food sharing.”

Oehninger helped establish Freedge, a network of free community refrigerators, in 2014. Freedge has made itself a repository of information for people interested in community fridges, including maps of fridges worldwide, examples for practices and art, and even general legal guides (though currently limited only to California and a few Canadian states).

Freedge is also behind the Davis Night Market, which redistributes unsold food from local restaurants to people in need. Oehninger observed that the majority of Night Market clients were “not homeless, but they’re in need.”

The need for food exists in Los Angeles County, too. According to a 2015 report from the LA County Department of Public Health, 29.2 percent of L.A. County residents are food insecure. That means they’ve got limited or uncertain access to food sources, due to a lack of readily-accessible grocery stores, or because they’re financially unable to buy from expensive stores around them.

One worry about the fridges is the potential for a negative response from local authorities. Acedera admits that she is concerned, in particular, about L.A. County’s Department of Public Health.

“My hope is that they let us build this network much like they did in New York,” she said.

When asked about the free fridge concept, a DPH employee not authorized to speak on behalf of the department said that “we don’t recommend it. It’s always good to have a permit or filing that gives approval to operate.”

Vergara said that the organization is happy to comply with any requests for permitting. “I understand why someone would be concerned about this concept, but we are committed to maintaining these, and we’re committed to keeping our community safe.” That means daily checks, maintenance, and regular sanitation, she said. “If I was the city, I’d want to make sure my city’s safe.”

Joshua Mock, of Little Amsterdam Coffee on South Redondo Boulevard in Mid-City, is also opening up a free fridge outside of his coffee shop. Like Hoyle, he’s a Black businessman working to serve his community, and like Hoyle, he’s going to let Community Fridges Los Angeles handle the produce and goods. He’s also looking to contribute beverages from his shop to the fridge. But Vergara said Mock was willing to jump in and help within the first sentence of their first meeting. “It’s for the community? Yes, let’s do it,” she recalled him saying. “If you sit there in his shop for 15 minutes, you see how invested he is in his community. He really cares.”

Mock deeply believes in his platform as a business owner, as a man who has seen struggle and worked for his good fortune, that he can help people in need within the community.

“It means the world to me to know that I can give someone something. God gives me the world every time I wake up and look at my kid,” Mock said. “I love feeding people. A great giver is a better receiver. I’ve been given my blessings, I want to keep on giving.”