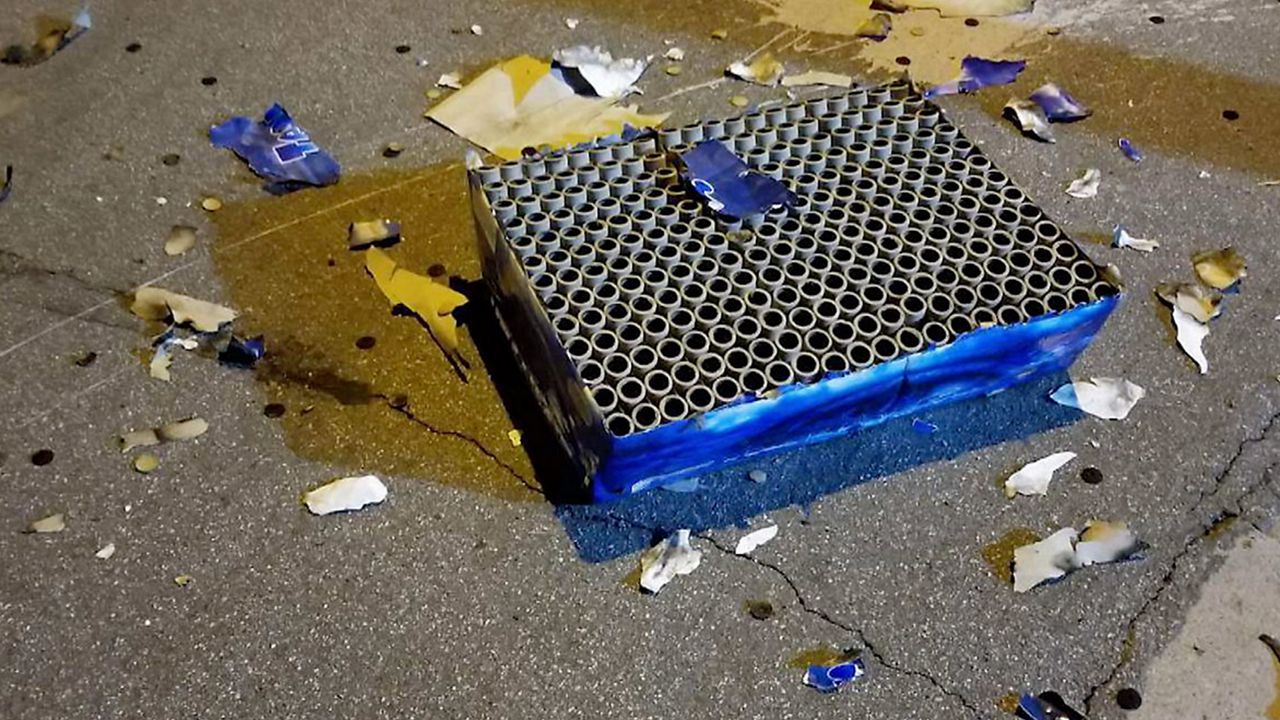 LA HABRA, Calif. – Lately it’s hard for Julie Edwards to enjoy the peace of her own home. She lives in La Habra with her husband and almost every night they deal with loud and at times terrifying explosions from illegal fireworks happening around their home.

“It’s always bad on the 4th of July, but now it’s just constant,” Edwards said. “They’re loud mortars, sometimes they feel like they’re directly across the street. Recently they are so big they shake the house.”

In one scenario, someone dropped off a fireworks barrage, a box containing at least 200 fireworks, and set it off nearly right outside their home.

“They lit it and drove away. I thought it was gunfire, it was just rapid explosions,” Edwards said.

The experience left her cats traumatized and she’s worried about leaving them at home at night due to the constant fireworks.

“It frightens the bejeezus out of them. One cat was so stressed out we had to go to the emergency vet and that cost us $2,000,” she said.

One of the greatest concerns surrounding the surge in illegal fireworks complaints is the fire danger. Earlier in June, a brush fire broke out in Hacienda Heights that investigators believe was sparked by illegal fireworks.

But when it comes to catching the people behind them, La Habra Police says it’s not that easy.

Lt. Brian Miller of the La Habra Police Department said the city has a zero tolerance policy when it comes to illegal fireworks, but often times when they are reported there is no physical evidence that can be submitted along with the call and by the time officers show up at the location, the suspects are out of sight.

“The majority of the calls we get the citizen on the phone saying, ‘Hey I heard the fireworks,’ so it’s ‘heard only’ and they don’t have specific info. That’s what makes it so difficult,” Lt. Miller said.

According to Miller, last year between March 1 and July 20, La Habra Police received 265 reports of illegal fireworks. The majority, 170 reports, occurred on the Fourth of July. But this year just since March 1, the department has already received more than 200 reports.

“We may be attributing that to people staying at home during this epidemic, people getting a little stir crazy,” Lt. Miller said, adding that he urges people who report the fireworks to try to submit photos and videos that could lead to a suspect.

Lt. Miller also noted that “ShotSpotter” technology aimed at detecting where gunfire goes off and leading officers to an exact location, does not work with fireworks.

La Habra PD has been confiscating some illegal fireworks for destruction, but admits it hasn’t been able to make any arrests.

Edwards says knowing no one has been caught or faced consequences makes her feel hopeless.

“Is this something we have to live with every night? My husband and I have to draw straws over who is going to call the police,” Edwards said. “If they’re going to make them illegal then they need to be able to enforce it.”

The Edwards have even become somewhat of a detective team themselves to try to curtail the problem. They found illegal fireworks being sold on OfferUp under the guise of Play Station controllers. 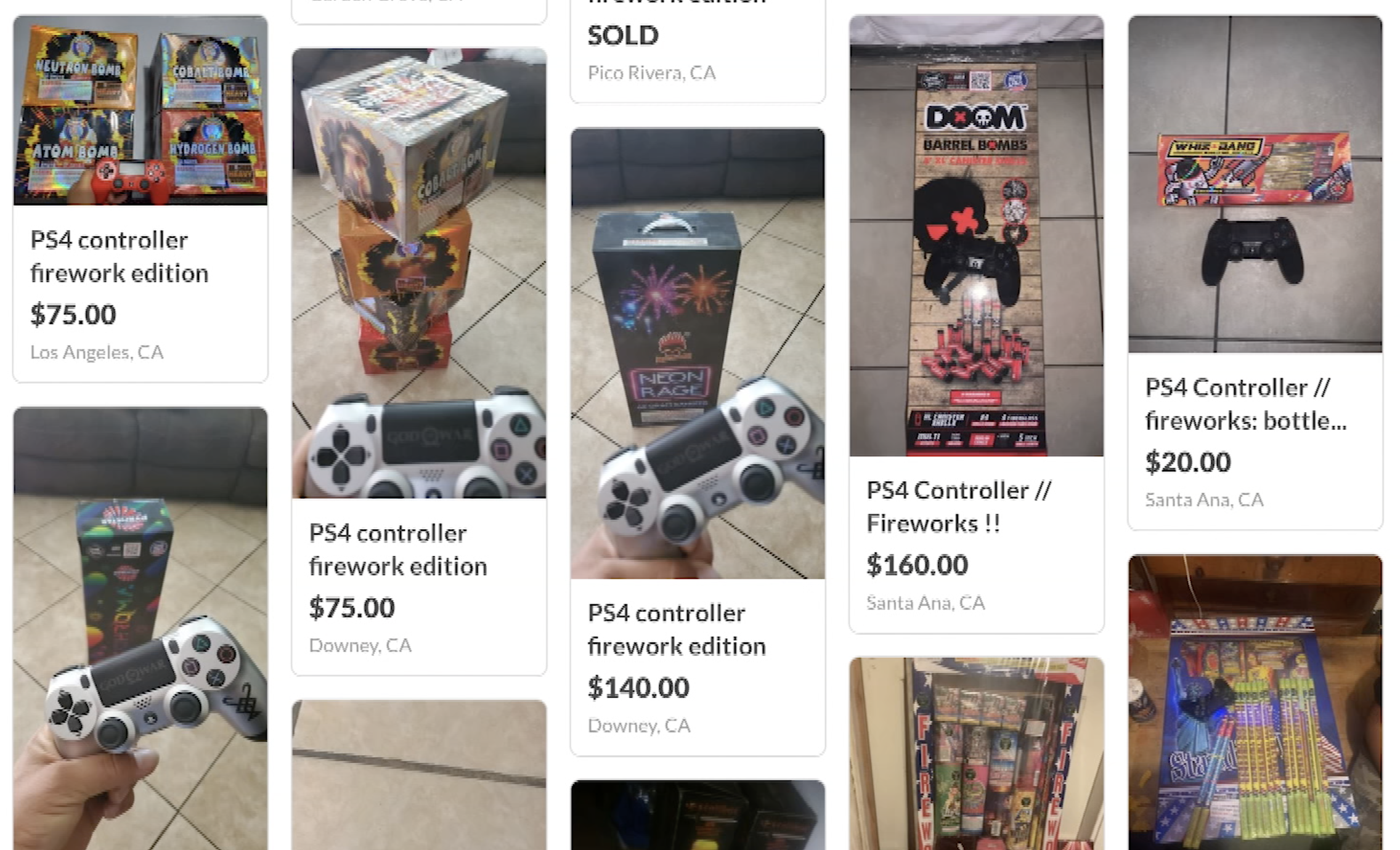 When you perform a search for the video game controller, a list of items pop up showing a controller held by someone’s hand in the foreground and one, two or even dozens of boxes of fireworks in the background.

“’PS4 Remote Fireworks Edition,’” Edwards said reading through the list of illegal fireworks for sale on OfferUp. “It’s just a bunch of fireworks, it’s so blatant.”

Spectrum News 1 reached out to some of the listers and received messages back saying they were happy to sell us fireworks, massive illegal fireworks, for cash in various parts of Southern California.

La Habra PD says it is investigating some of the postings.

We contacted OfferUp about what it’s doing to prevent this and received the following statement:

With the explosions cutting into her daily life, Edwards just wishes the people responsible would be a little bit more considerate. She especially worries for her neighbors with pets, the elderly and anyone who is a combat veteran suffering from PTSD.

“That’s what we’re all trying to do. We’re trying to be considerate and not get each other sick with deadly viruses. We’re trying to bring to light the unfairness of the way different people are being treated. And you know being a good neighbor is another way to do that.”