Brian Kito is the third generation owner of the 117-year-old Fugetsu-Do Confectionary in Little Tokyo. His business has survived the Great Depression, World War II, the 1992 LA Riots, and the Great Recession. (Spectrum News/Susan Carpenter)

LOS ANGELES – During pre-COVID times, the Suehiro Cafe did a bustling business in Japanese comfort food, serving up ramen, udon, and donburi in a cozy 49-seat restaurant in Little Tokyo. But these last few months have been tough for Kenji Suzuki, who, like all restaurant owners in the city, was forced to close his dining room and do only takeout and delivery for the past three months.

Shifts that had been staffed with 10 people were reduced to two. Sales declined 90 percent.

“That was tough and, of course, we still had to pay for insurance and rent and utilities. Most of those things don’t change, so with sales being down, it was almost impossible to pay for all of those,” said Suzuki, who got a loan through the federal Paycheck Protection Program and also took a $100,000 loan from his retirement account – just in case.

Suzuki, it turns out, is like a lot of small business owners in Little Tokyo and throughout the country. According to a new national survey from the advocacy group, Small Businesses for America’s Future, many of them are dipping into personal savings, charging up credit cards or using money from the PPP to help reopen their businesses. Fifty-two percent say they have taken on new debt because of the COVID-19 pandemic, and 21 percent have racked up more than $100,000 in fresh debt. One in four have considered closing permanently, the survey found.

Yoshi Yamamoto is the owner and sole employee of the Ginza-USA gift shop, which opened Sunday after being closed since mid-March. The small store on Little Tokyo’s 1st Street sells L.A. magnets, key chains, and T-shirts mostly to tourists, he said. Before the pandemic, it was a good business. But when Yamamoto had to close, he relied on his savings and money from a mutual fund to get by.

On Monday morning, the handwritten sign at the shop’s entrance, saying no more than four customers could shop at one time and that shoppers could only stay inside for five minutes, was largely unnecessary. No one was there. “It’s very low sales. It’s almost one-tenth of sales,” Yamamoto said. “I hope I can pick up, but even today it’s very quiet.”

He’s not sure when business will improve.

“I’ll just try another three or four months,” he said. “If I keep losing money, then I cannot survive, but let’s see what happens.”

With nearby restaurants resuming dine-in service, “I think we’re a little bit getting better,” An said. Selling everything from Pokemon backpacks to Calvin Klein sports bras, her 20-year-old boutique in Japanese Village Plaza benefits from foot traffic to the mall’s many eateries. It reopened Friday after being closed for three months. 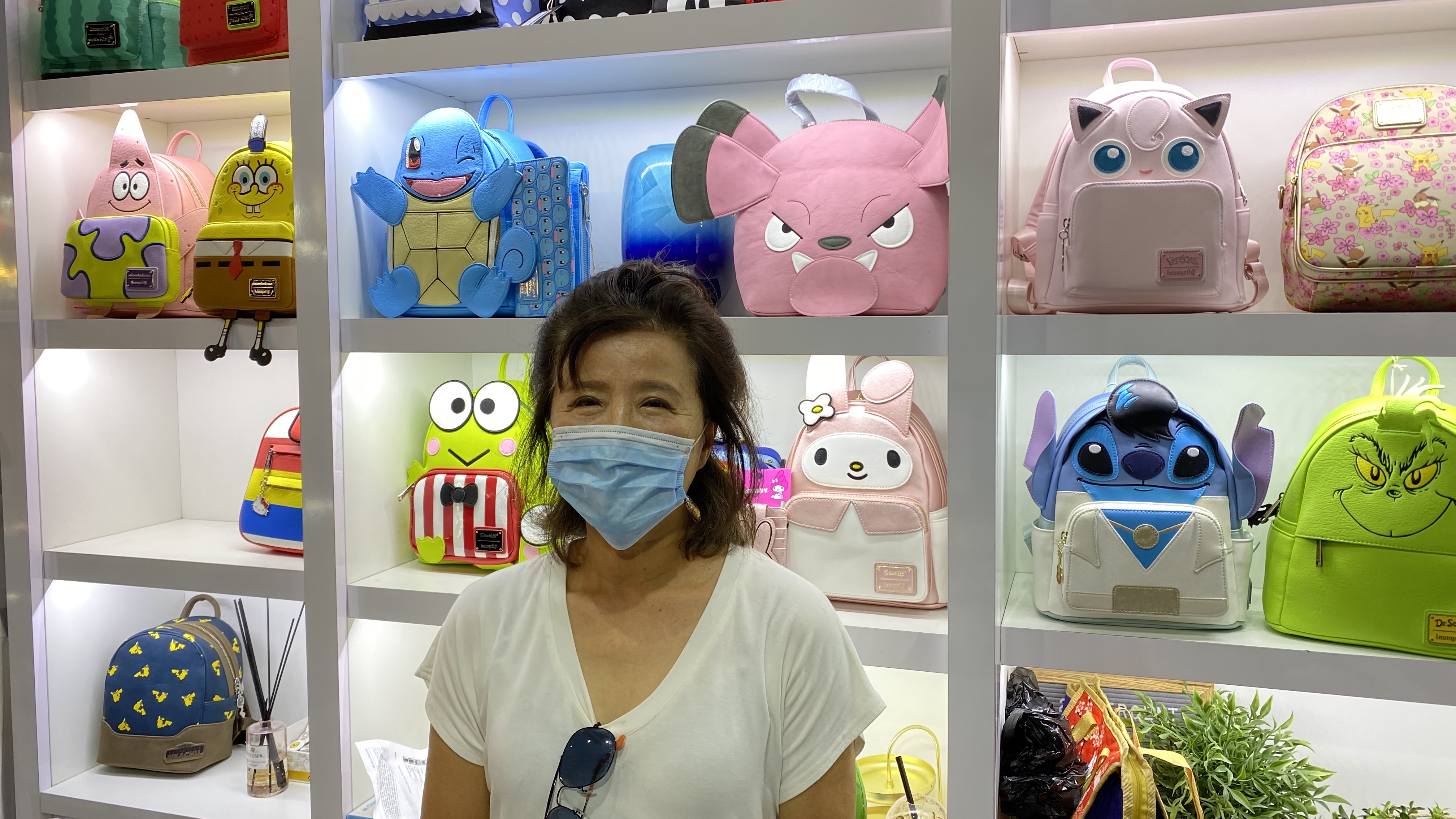 Like many Little Tokyo businesses, An is taking measures to protect her staff and shoppers from the coronavirus, including hand sanitizer, a plexiglass barrier in front of checkout, and the removal of her entire Ray-Ban sunglass display because it was too high-touch. The Fugetsu-Do Confectionary is doing all of those things. Open for 117 years, it is the oldest business in Little Tokyo, and third-generation owner Brian Kito intends to keep it that way.

“Pandemic, riots of 1992, the Depression, World War II hasn’t shut us down yet,” said Kito, even though his mochi candy shop is doing 70 percent of the business it did before Covid. In January and February, his shop benefited from a viral Buzzfeed video that drew additional customers and helped see him through. “This store has such a history of going through some really tragic times, our tolerance level is very high in terms of what we think could put us down.”

During hard times, businesses have to make adjustments, he said. And in Little Tokyo, many of them are doing that “by working together. Because of that, they’ve been able to overcome some of the horrible parts of this.” Kito is helping the owner of a local kimono rental business by selling masks she is now making from kimono fabric. He said his candy shop now sells about 200-300 of her kimono masks each week. The social services organization's Little Tokyo Service Center and Keiro also helped pioneer a program for Little Tokyo restaurants to provide meals to some of the area’s seniors.

Suehiro Cafe was one of them, providing as many as 140 meals per week to older Japanese Americans in the area. “That program helped us to get through,” said Suehiro Cafe owner Kenji Suzuki, whose dining room is now open at 50 percent capacity. Business is going to be tough for a while, he said, but he’s hopeful “because I have no choice,” Suzuki said of the restaurant that is among the oldest in Little Tokyo. His mother opened it 48 years ago.

More than 100,000 small businesses in the U.S. have permanently closed as a result of the pandemic, according to a study conducted by economists at the University of Illinois, Harvard Business School, Harvard University, and the University of Chicago.

Small businesses are a large economic driver, employing almost half of all Americans and creating nearly two-thirds of new jobs coming out of the Great Recession, according to the U.S. Small Business Administration.