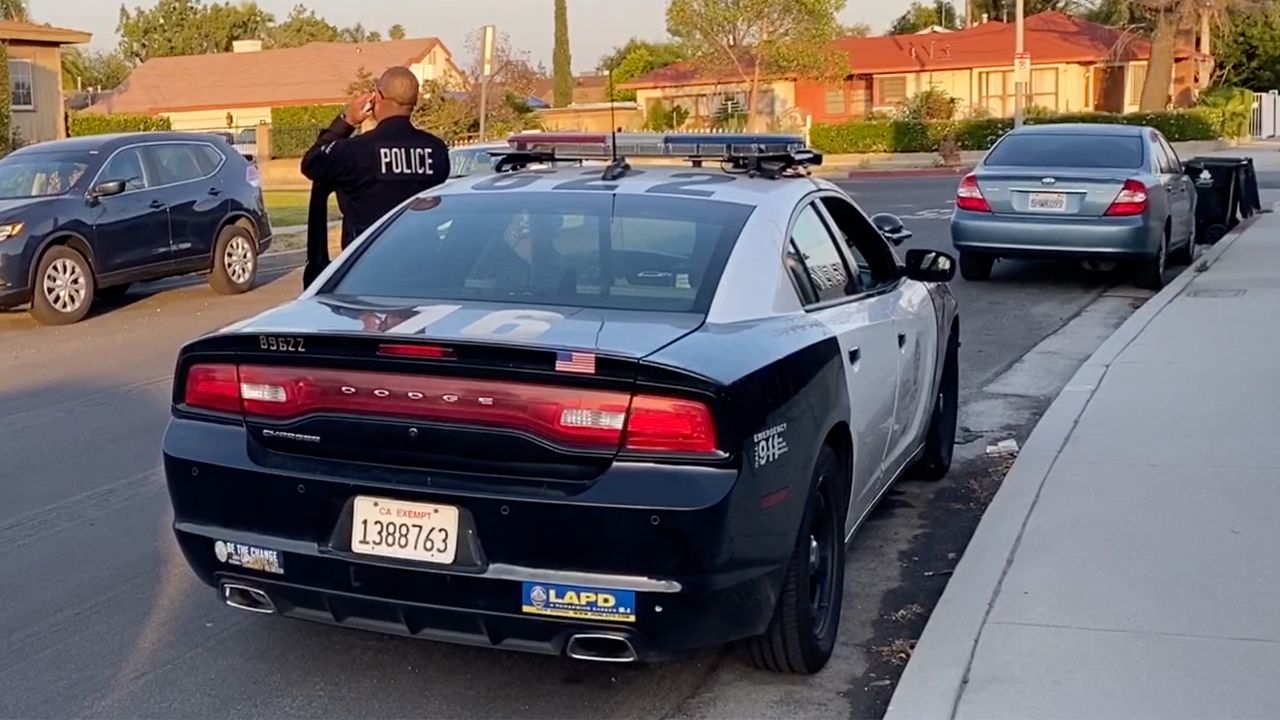 An officer standing next to a patrol vehicle.

LOS ANGELES – While LA City Council President Nury Martinez was filing a motion last week seeking to cut $150 million from the LAPD budget, she had an LAPD unit standing watch outside her home providing her family with a private security detail since April.

The round-the-clock protection unit, often staffed by two officers, infuriated some members of the police force when Martinez introduced the motion, which reads in part:

“We need a vision for our city that says ‘there is going to be justice.’ American society is founded on a racial hierarchy, one that is born out of slavery, followed by Jim Crow segregation and corporate abuse of labor. As such, police departments are asked to enforce a system of laws that are designed to reinforce and maintain economic and racial inequality.”

McBride, who has been in law enforcement for 30 years, spent more than five years at the LAPD’s Foothill Division, which serves Martinez’s district in the San Fernando Valley.

The station covers 44 square miles with seven police units each shift, according to a high-ranking member stationed at the division.

“It’s a very, very large division,” McBride said. “Now we’re taking one unit away from the equation. If a citizen calls 911 there’s less units on the streets to respond to that 911 call.”

While one LA Councilmember was introducing a motion to cut $150 million in #LAPD funding, that official also had round-the-clock private security provided by the department at their home. @LAPPL calls it hypocrisy, adding it may have cost taxpayers around $100k. @SpecNews1SoCal pic.twitter.com/lrrRC65oj1

Neighbors confirmed the units had been there for two months, but didn’t want to speak on camera, only saying they were pleased with having private security provided by the LAPD in their neighborhood.

Multiple LAPD sources confirmed the units were directed to provide 24/7 security beginning April 4 at Martinez’s home, almost always staffed by two officers. As of May 6, we’re told the detail decreased to 7 a.m. to 9 p.m. with roving patrol checks overnight.

McBride said with the city of Los Angeles facing a budget crisis amid the COVID-19 pandemic, he feels Martinez should have hired private security instead of using taxpayer dollars to fund round-the-clock protection.

“It’s disgusting,” McBride said. “For two officers in front of a residence since April, you’re probably over $100,000 of the people’s money.”

The protection detail was canceled Thursday night when we first contacted Martinez’s office for comment.

Rick Coca, the spokesman for the Council President, responded to Spectrum News 1 on Monday with the following statement:

Coca later told Spectrum News 1 that Martinez canceled the detail because she felt the security it was supposed to provide was now compromised.

A spokesman for the LAPD would not offer details on whether credible threats existed, saying the department does not comment on security details.

“They try to keep things close to the vest because they can get leaked to the media and upset the community," McBride said. "And if she really felt threatened, then that security should have still been in place. Obviously there wasn’t a threat there because the units from what I understand have disappeared.”

Tensions between the City Council and the LAPPL came to a boiling point when Martinez, joined by Councilmembers Herb Wesson, Curren Price and Monica Rodriguez, introduced a motion to cut funding to the LAPD by $150 million as a response to the protests over racial injustice.

The proposed cuts would amount to a relatively small fraction of the overall LAPD budget of $3.1 billion, but the move still sent shockwaves through the department.

During one contentious meeting between the LAPD’s Valley Bureau and Councilwoman Monica Rodriguez that was filmed and posted to social media, one officer suggested if cuts were going to be made, the city should start with protection details provided by the LAPD at council members’ homes.

In the video you can hear the officer ask Councilwoman Rodriguez, “How many council members currently have a protection detail at their residence?”  Rodriguez replied that she didn’t know but would look into it.

“Ok, if, maybe you find that out we can probably start by cutting those details, that’ll probably trim some of the budget,” said the officer.”

We tried to determine if any other council members had security details during the same time period as Martinez but LAPD’s spokesman would not reveal that information.
“You have police officers providing security for city leaders and then we feel backstabbed,” McBride said.

That feeling of betrayal was highlighted when the LAPPL went as far as calling Mayor Eric Garcetti ‘unstable.’  It came as a response to a public comment made by the mayor in which he referred to police as “killers.”  He later clarified, saying he was speaking about police agencies across the country.

“He calls all police officers killers, and yet we’re the ones that provide security for him his wife and his children,” McBride said. “It’s two-faced. They’ll do whatever they can to make somebody happy over here, then they’ll go over there and say something else. It’s a typical politician move.”