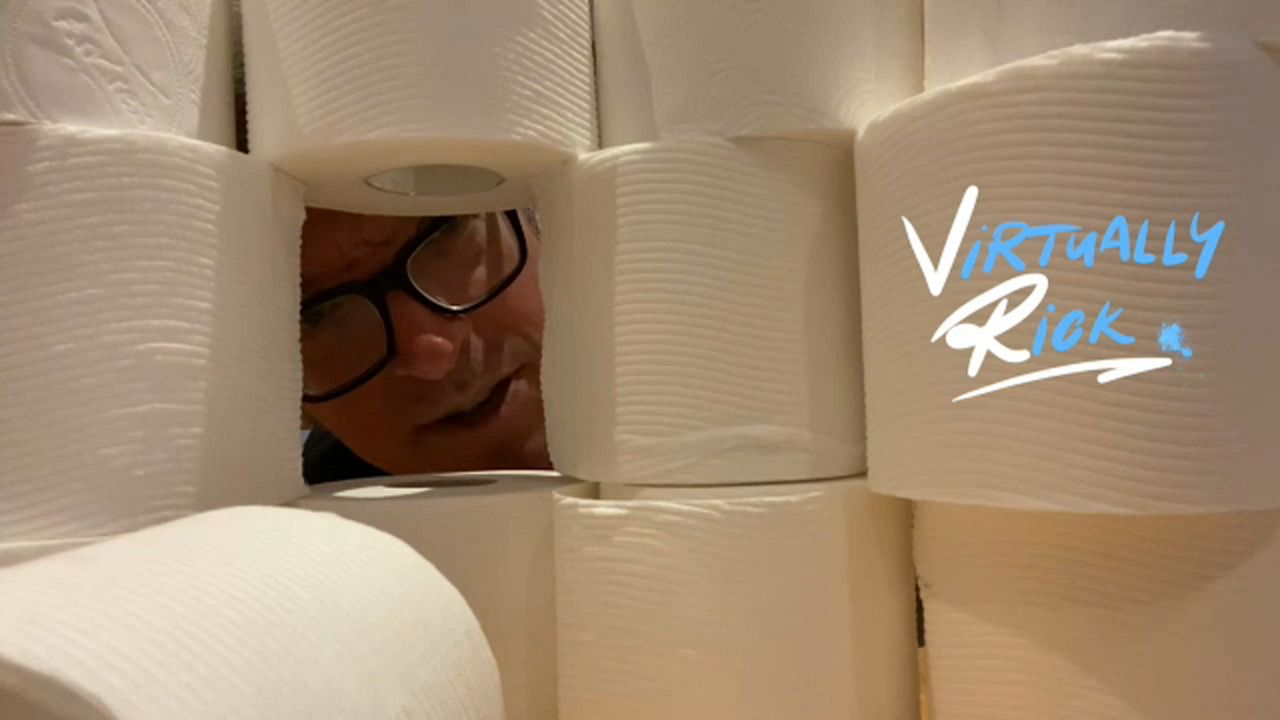 So whilst we wait for more of this most intimate of papers to fly back onto our shelves, in this Virtually Rick, we’re . . . "on a roll."

The story so far. We use a lot of the stuff, around 400 rolls per home, per year in the U.S. alone. That’s the same amount of paper if we brought home 50 books. How many trees is that?

Well enough to make you want to turn over a new leaf or at least use one instead. But actually the ancient Romans didn’t, they used a sponge on a stick soaked in vinegar called a tersorium to use on their posterium or whatever they called it. Get the point?

Well, you would if you weren’t using it properly! And even 1,000s of years before then the Greeks had invented the oldest flushing toilets in the world, well whooppee doo-doo! “Butt” what to use on your behind?

Well seeing as the Chinese were making paper back in the 2nd Century you have to wonder why it took them 400 years to put one and one together to use it for their number 2's, which they were the first in the world to do. However, they weren’t the only ones slow on the booty-duty.

The Euro-peans weren’t just Euro-pee-in, they too had needs that were a bit “behind” using cloth, rags, leaves or their even own hands, unless you were King Henry VIII’s “Groom Of The Stool."

I’m guessing they ‘recycled’ your resumé once you’d got that job. But paper, or should I say, “butt paper” in the West wasn’t really a thing until newspapers took off in the 1700’s. Which had a two-fold result, now you could REALLY express how you felt about politics and then flush it down the loo.

Not to be advised today with our sensitive modern plumbing although it didn’t stop an Australian newspaper recently printing extra pages just in case your “call of doody” ran short of supply.

Oh and before this, Americans had the ultimate organic toilet paper product -- they used corn cobs. Yes! After squeezing them between the cheeks on your face -- then do the  same on your cheeks down below. But the real farmers friend was their Almanac, published with a handy hole in the corner allowing you to hang it next to your porcelain throne and turn a page of future predictions into a page of tomorrows compost.

But the real man of the hour, or however long you spend in the bathroom, was Joseph Gayetty who in 1857 invented aloe infused paper at 500 sheets for 50 cents. And 10 years later the Scott brothers did us all a “solid” and invented the perforated paper in rolls as we know it today.

But it wasn’t until 1935 that we all got a splinter free version. Ow!

But if you really don’t want to be a pain in the behind perhaps the smartest people are the French and the Japanese with their bidets and bottom washing bathroom brilliance, which is probably the best way to save the forests of the future from meeting a very sticky end.

Have something you’d like to see me explain here? Well why not head to my Instagram @VirtuallyRick and send me a message there!