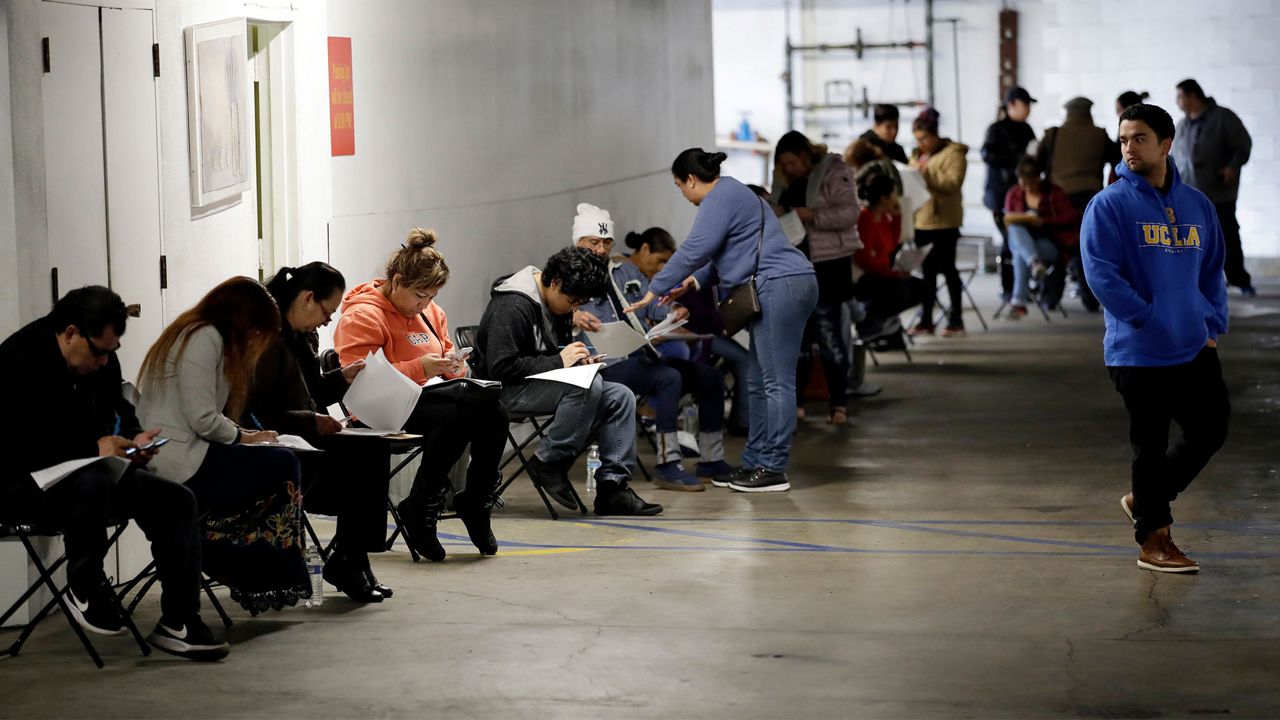 Unionized hospitality workers wait in line in a basement garage to apply for unemployment benefits at the Hospitality Training Academy Friday, March 13, 2020, in Los Angeles. Fearing a widespread health crisis, Californians moved broadly Friday to get in front of the spread of the coronavirus, shuttering schools that educate hundreds of thousands of students, urging the faithful to watch religious services online and postponing or scratching just about any event that could attract a big crowd. (AP Photo/Marcio Jose Sanchez)

California Struggles to Keep up With Unemployment Claims

LOS ANGELES  – U.S. Department of Labor statistics indicate that some 6.6 million people filed for jobless benefits the week ending April 4. According to Governor Gavin Newsom, 2.4 million Californians have applied for unemployment insurance since the outbreak of the coronavirus pandemic.

One of them is single mother of three, Timeka El-amin.

El-amin has dialed the number to the Employment Development Department every day, multiple times a day since she’s been laid-off.

“I check every morning when I get up, it’s almost like a lottery, like, oh, I hope that they approved it," El-amin said. "And then when you don’t see it, it’s still pending, it’s a let down.”

El-amin is one of the millions of Americans who lost their jobs due to the COVID 19 pandemic. She worked for an ophthalmologist office for six years, until March 16, when several people in her office were laid-off.

She was devastated and quickly asked herself, “What am I going to do? Especially living paycheck to paycheck. Honestly, you know I have a little savings but it’s not a lot.”

The single mother of three contemplated getting a job at a grocery store but she worried about being exposed to large crowds because her three-year old son has a congenital heart defect.

“I can’t risk him getting sick and going into the hospital, because something like that would be deadly to him,” she said.

So El-amin applied for unemployment on March 16. But within the last week she was informed she’ll have to do a telephone interview. The only problem is there are no interview slots.

Now, she waits. But every time she attempts to call the EDD to get an update, she’s unable to get through.

We contacted the EDD, which has re-directed about 850 staff members to process claims.

“The massive around-the-clock staffing and IT efforts the EDD has undertaken is helping the department automatically push a large volume of claims through our system, allowing us to issue payments to Californians in need as quickly as possible.”

For El-amin, who’s been waiting over three weeks for a phone interview, it’s the uncertainty that’s making the wait even more difficult.