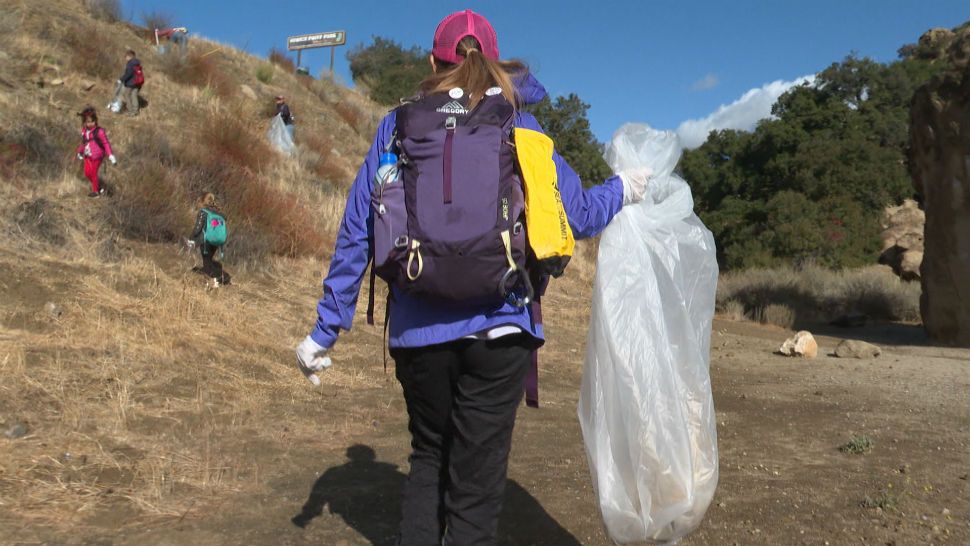 LOS ANGELES – They are mothers and others giving Mother Nature a helping hand. Rather than hit the stores, they hit Stoney Point Park on Friday, picking up trash piece by piece.

“Look at all the cigarette butts right here!” Kristen Hernandez said, finding a pile of discarded butts in the brush.

Hernandez organized the #OptOutside event through Trailmothers, a local group she founded a few years ago.

“To empower other moms to step out of their comfort zone, whether it’s to hike, run, go camping,” Hernandez said, “and to also inspire their kids and to teach them to always leave no trace.”

Unfortunately, she says many people leave much more than a trace when they use this trail, which is one of her favorites.

“People come here and they think this area is a dump,” Hernandez said, picking up handfuls of scattered potato chips. “It’s not a dump.”

Emily Sluiman is one of the members who is glad to spend her time outside instead of spending her money at a mall.

“Pull away from that whole consumerism mindset,” Sluiman said.

As a mom of three, she feels it is important for kids to see their parents doing this type of community service.

“They’re little sponges, so they absorb everything they see,” Sluiman said. “And if they see us being positive and having positive actions then that will instill those values into them and they’ll take that with them as they grow.”

The cleanup event was sponsored by REI, which launched the #OptOutside movement in 2015 when they became the first store to close on Black Friday. Since then, other retailers have announced alternative ways to mark what can be the busiest shopping day of the year.

But not for Hernandez who said, “I’d rather be outside doing something for the community or trying something new with my son.”

She says being out here – and seeing how many families chose to join her -- is very gratifying and she knows it will make it a difference.

“I think this is going to make everybody’s outdoor experience a little better,” Hernandez said.

She hopes those who use the trail will notice it has been cleaned and maybe make more of an effort to keep it that way.