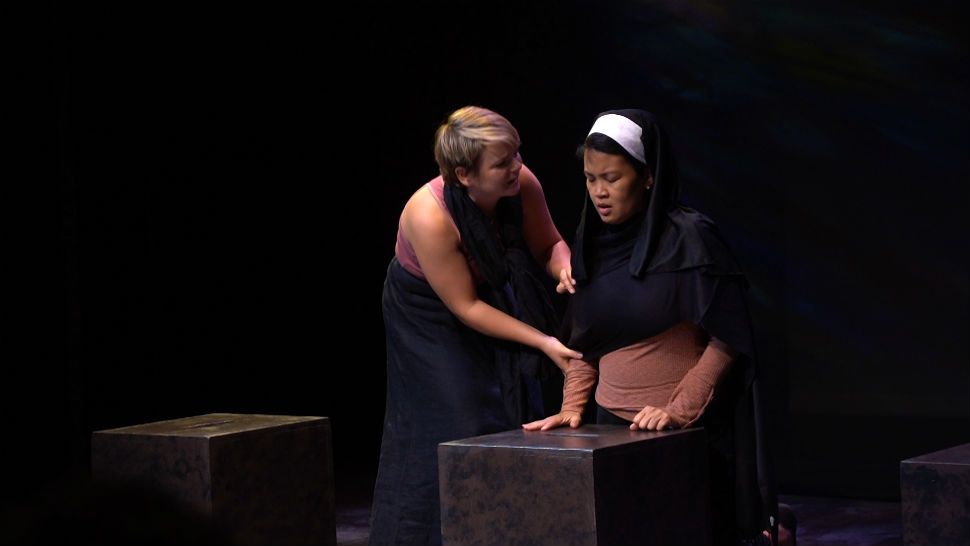 Local Play Examines the Present Through Stories of the Holocaust

LOS FELIZ, Calif. –  From the darkness of the backstage tunnel to the office, Wendy Kout is getting ready for another night of her production Never Is Now.

She is one of three directors of the show playing at the Skylight Theatre about how real-life survivors of the Holocaust, who were able to make it through one of most horrific events in modern history.

“But what’s equally important is the connection to how does this play relate to now. Never is Now. What are the parallels between the rise in fascism in Germany to what we’re experiencing in our country now,” Kout said.

Kout is a part of the Alliance of Jewish Theatre, yet many of the actors in the show, playing Jewish roles, are not in fact Jewish. The cast is purposely filled with diversity.

“My Godmother growing up was Jewish. I have family that’s German as well, that were involved in the Holocaust so for me having that connection was actually important,” said actor Adam Foster Ballard.

“Hitler’s Germany. It wasn’t just the Jews who were targeted. It was what he called the undesirables so we said diversity is the way to go,” said Kout.

The show interweaves two storylines. One about dealing with horrors of the Holocaust. The second is about the actors connecting to the story they are telling - expressing concerns about today’s political climate.

Of course, she and the cast are in nowise comparing the Holocaust with America today, but they do want everyone to learn from the mistakes of the past, so we can avoid apathy, and come together to keep a watchful eye on the future.