Grassroots Political Activists Hope to Show Power of the People

SHERMAN OAKS, Calif. – On any given weekend, Suju Vijayan is usually attending a political rally. On week nights she is usually greeting members of the East Valley Indivisibles group at someone's house.

On this night, Vijayan is leading the launch of their 2020 Get Out The Vote election effort. She is talking to a crowd of about 25 people in a Sherman Oaks living room.

“We have three terrific speakers here for us talking about get out the vote. We do phone banks, letter writing, and collaborating with other local groups. And just to show the power of the people, last Monday, in four hours, Indivisible drove 11,000 calls to Congress. And by that evening, Pelosi had called for the beginning of an impeachment inquiry," said Vijayan.

Indivisible is a grassroots movement of more than 5,000 local groups around the country. It was started in the wake of the 2016 election by former congressional staffers who witnessed the rise of the Tea Party. They wanted to replicate the Tea Party success by getting Congress to listen to a small and vocal group of constituents, but with principles built on the values of inclusion, tolerance, and fairness.

“We do all kinds of things. We meet with our elected representatives, both on the state level and on the federal level, we advocate for legislation. We do get out the vote, because getting the right people in office is going to make the issues we care about moving the direction we want much more easily,” said Vijayan.

“We also try to educate and inform the public we just had a panel on health care and the options moving forward. We take part in actions like #defundhate. It was a series of actions about the crisis on the borders,” said Vijayan.

“Indivisible has provided a way for average people to be engaged in politics. Without just writing a check. To really be boots on the ground involved. I really feel that democracy is at risk, that we risk losing something that I grew up believing was very, very important. And I want to make sure that I can be counted as someone who fought for it,” said Austin.

“The key to winning the election in 2020 is getting people out to vote because if more people vote, democrats win. That's our belief,” said Vijayan.

Vijayan says the group's goals all come down to giving American citizens a voice and a vote in order to keep democracy moving forward. 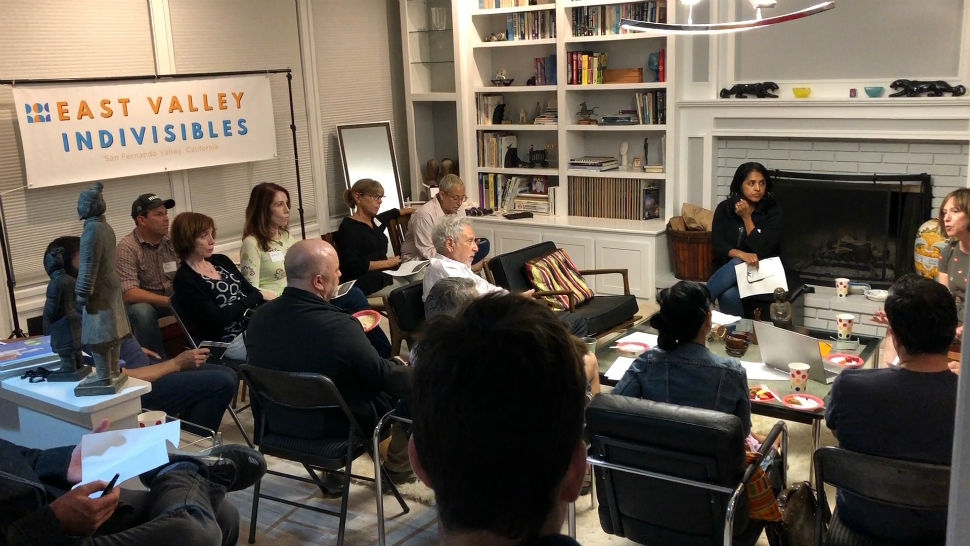