MUSIC DIARIESAn inside look at the stories of SoCal-based artists and bands hosted by Amrit Singh debuts January 16.
DECISION 2020A Southern Californian's guide to the presidential election
WATCH NOWSee how our small everyday decisions have a tremendous impact on the quality of our lives in “Exploring Your Health.”

PLAYA VISTA, Calif. – Shuffling through stacks of papers and preparing lesson plans is how Dr. Arik Greenberg often spends his office hours. He is a professor of theological studies at Loyola Marymount. He spent his life researching religions and is passionate about teaching the youth.

“I’m not going to be able to stop reading this,” said Dr. Greenberg.

Outside of the classroom, Dr. Greenberg continues his work. He created the Institute of Religious Tolerance, Peace, and Justice in 2011 to open the interfaith dialogue and teach about all religions of the world. He says the interfaith movement is new and many don’t even know what it is.

“People of different faiths trying to understand each other and being willing to put differences aside for a moment to focus on common problems,” explained Dr. Greenberg.

He grew up in an interfaith family, his dad was raised Jewish and his mom raised Catholic but converted to Judaism. He feels if we can all be understanding of one another; the world would be a better place.

“So that spurred me to use the interfaith dialogue as the pathway to world peace,” said Dr. Greenberg.

In a time when the Islamic community was under attack for practicing their beliefs, Dr. Greenberg thought it was time to show support in a public way. This is when the first ever Interfaith Solidarity March was born in Southern California in 2016.

“Muslims would have the opportunity to publicly proclaim that ‘We are your neighbors. We are your peaceful people. We are Americans,’ and put it in a context where we could all stand arm and arm with them and support them,” said Dr. Greenberg.

Then it grew from there, the next year it spanned to support all religions to promote interfaith dialogue, inter-religious understanding, respect for other faiths, and most importantly the right to religious freedom.

“Focus on unity between faiths of the world, decrying or rejecting religious extremism and violence in the name of religion,” Dr. Greenberg said.

The Los Angeles chapter actually paved the way for other marches around the world. About 24 Interfaith Solidarity Marches will happen at the same time on the same date, September 22nd.

The march begins on September 22nd and 1 p.m. and goes until 5 p.m. Everyone will meet at the Islamic Center of Southern California at 434 S. Vermont Ave. and ends at the same location.

It will pass other churches on an approximately one mile route. There will be speakers, activities, performers and more along with the march. Anyone is welcome to come. 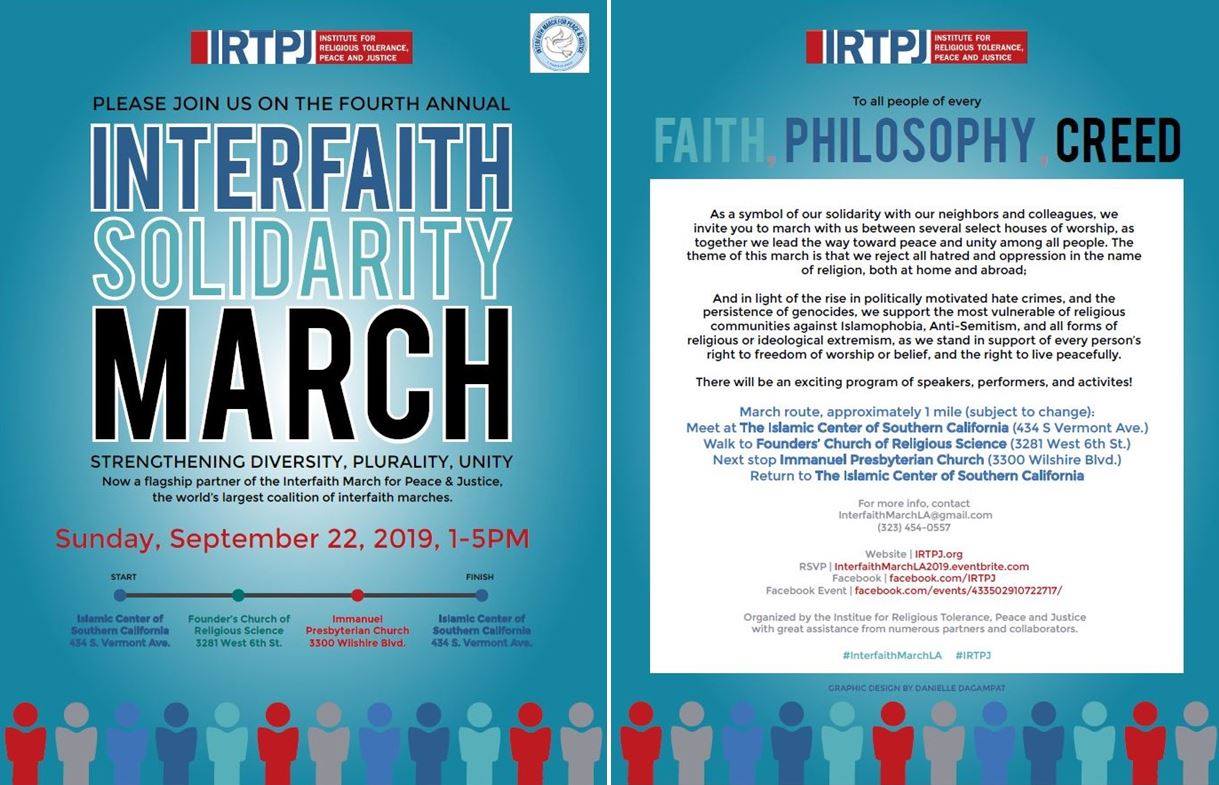