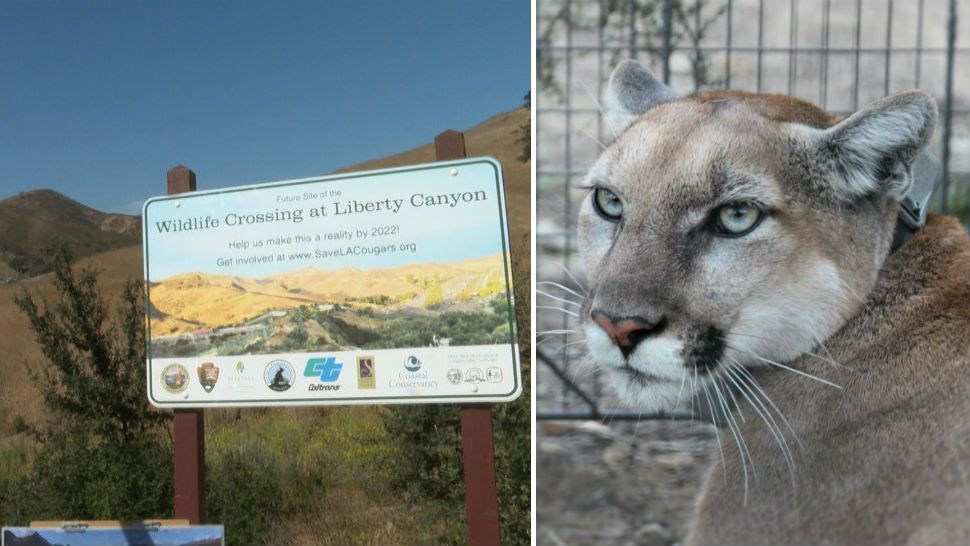 Wildlife Crossing Could Save Mountain Lions From Extinction

AGOURA HILLS, Calif. – If you build it, they will cross. As one of the architects working on the Liberty Canyon Wildlife Crossing, Clark Stevens is confident they chose the perfect location.

“We call this the last best place in the Santa Monica Mountains for a crossing," Stevens said.

Stevens, the executive director of the Resource Conservation District of the Santa Monica Mountains, says when designing the bridge, it all came down to geometry. The span needed to be high enough for trucks to pass under, but not too steep for animals to climb.

“Wildlife are not big fans of rappelling up and down things," Stevens said.

Ana Beatriz Cholo, spokeswoman for the Santa Monica Mountains National Recreation Area, points out another important aspect of the area.

“As you can see on both sides, there’s space," Cholo said. "There’s open land and that’s very rare here because there’s so much development.”

Development is actually a big part of the problem. Mountain lions used to be able to roam freely to seek a mate, but now they are hemmed in by highways.

"These freeways are barriers," said Cholo. "They act as fences.”

The result is inbreeding that could lead to local extinction in 50 years.

“If we don’t have an unusual amount of freeway death, right?" Stevens said. "It could go faster than that.”

Freeway deaths are not uncommon. Since 2002, when the National Park Service found that 19 mountain lions have been killed on local roads. P-61 was the first radio collared mountain lion in the study to successfully cross the 405. He was killed trying to cross back.

At 4am, we believe P-61 was killed on the 405/Sepulveda Pass area. His final GPS pt indicates he was btwn Bel Air Crest Rd & Sepulveda Blvd underpass. The 4yo had crossed the 10-lane fwy in July. We don’t know why he tried to cross but it might be bc of another lion in the area. pic.twitter.com/B8Lmowy6sb

Meanwhile P-65 crossed the 101 from south of the freeway to the north side.

P-65 makes history as the 2nd radio-collared female mtn lion to cross the 101, moving north to Simi Hills. The rare event occurred 8/21 between midnight & 2am. We’re not exactly sure where but data indicates it was in Liberty Canyon area where a wildlife bridge has been proposed. pic.twitter.com/lMKXeEpGEo

"And she’s out there somewhere," Cholo said, pointing over the freeway.

The cougar is believed to have crossed around here, the very area where the bridge will be built. When completed, it is expected to be the largest wildlife crossing in the world, spanning 10 lanes of traffic on U.S. 101 plus two more lanes on Agoura Road.

Stevens says the actual 200-foot long bridge is only part of the project. There is also habitat restoration on either side. By making the area around the crossing attractive to all kinds of wildlife, animals will naturally find the bridge.

“As soon as the habitat is naturalized and dense enough and looks like home, they’ll use it like home," Stevens said.

He says similar crossings in Canada have proven popular with local animals.

“It’s like they are sitting there at the ribbon cutting," Stevens said. "I mean, they are using it within days.”

He hopes the same will happen here, in 2022 or 2023, when the ribbons on this project are expected to be cut.

The wildlife crossing at Liberty Canyon is slated to break ground within two years and could cost anywhere from $60 to 80 million– most of which will come from private sources. So far, over $13.6 million of that has been raised.