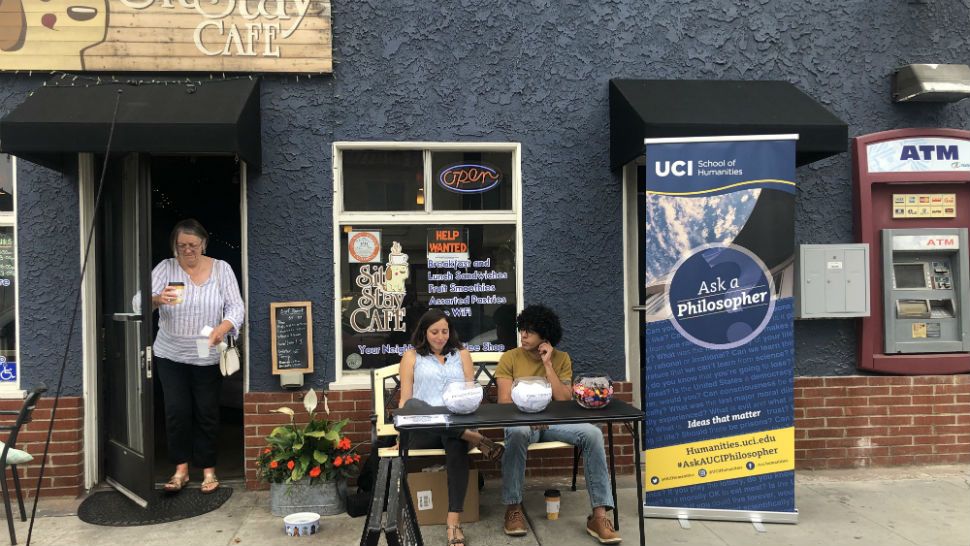 HUNTINGTON BEACH, Calif. – Pulling yourself out of your shell can be scary, but Rena Goldstein is building her confidence through talking and listening to strangers because of her love for philosophy.

“I’m afraid no one is going to show up, but I’m sure that won’t be the case,” said Goldstein, a PhD student studying philosophy at the University of California, Irvine’s School of Humanities.

Goldstein and a few of her friends like Sayid Bnefsi set up an “Ask a Philosopher” booth outside the Sit Stay Cafe in Huntington Beach. The coffee shop has a good number of customers coming in and out of the business.

The idea behind the booth is to give people a chance to interact with philosophers and exercise their minds with deep conversations about topics that can sometimes be divisive.

“We don’t take certain ideas personally. We learn about certain fallacies. We learn about separating the person from belief. We really do respect beliefs and want to take them to their logical end,” said Goldstein.

She created sample questions that cover various topics and put them into one of the three fishbowls she has on her table. The other fishbowl consisted of thought exercises and candy to help entice participants.

Some of her sample questions include:

After Goldstein and Bnefsi set up their booth, she decided to approach strangers to ask them to participate.

“I didn’t really see any reason to say no. I was down to jump in and have a conversation and see what was going on. I was definitely a little bit curious,” said Jack Butler, a Huntington Beach resident.

Butler says he walked away from the booth feeling refreshed.

“I can’t remember the last time I met a random person who was more interested in the ocean floor, so to speak, than the waves at the surface,” said Butler.

The feelings were mutual. Goldstein says there is nothing that gets her blood pumping like talking to people about philosophy. Goldstein explains there are philosophers who can be stuck in their own minds, but she finds being stuck in an office much more limiting.

Her philosophy is that random encounters with the public keep her mind open.