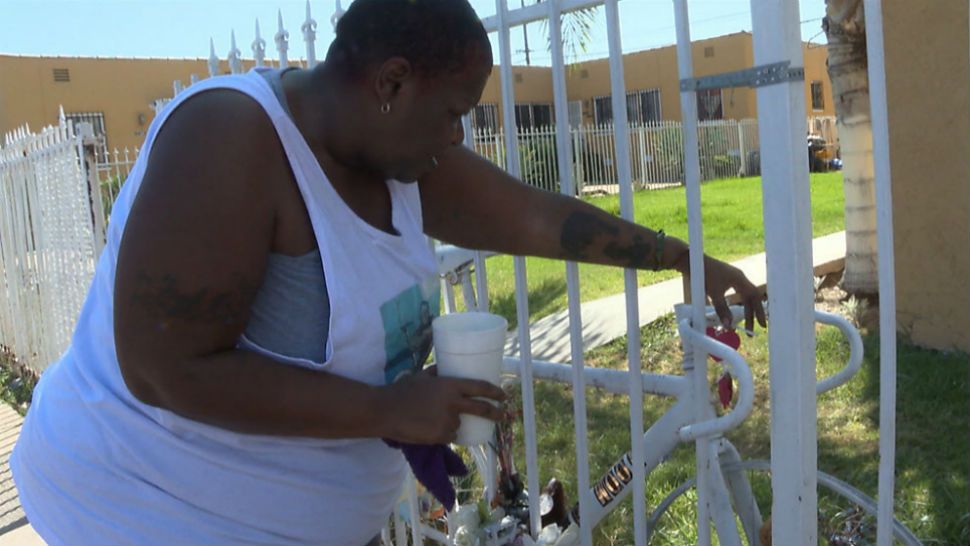 LOS ANGELES – Keeping the memory alive is what Beverly Owens is doing.

She makes sure this white ghost bike stays clean and protected for her son Frederick Frazer, or as everyone called him, Woon.

Woon was killed whle riding his bike in April of 2018 at the age of 22. He was just minutes from his home when the hit and run crash occurred, leaving behind just pieces of hit bike.

Woon was an avid cyclist, riding miles to and from work every day, so Owens never thought she would lose her son this way. Now, she has to cope with his death and new court hearings.

Charges have been filed against Mariah Kandise Banks for hitting and killing Woon. She turned herself in almost two months after the incident.

Banks faces two charges: One hit and run charge and one for gross negligence.

She plead not guilty to both.

Now, a year later, the hearings are finally taking place. But Owen doesn’t feel justice is being served and this all just brings her pain.

“To go back over everything, it’s hard,” said Owens.

According to AAA, nearly 65 percent of people killed in hit and run crashes are pedestrians or cyclists. Here in L.A., from July to August 2019 alone, LAPD reported 146 collisions involving a cyclist.

According to the City of L..A., nearly half of people killed in traffic crashes were pedestrians or cyclists. The city is working to solve this problem. Mayor Eric Garcetti has implemented Vision Zero, in the hopes of reducing such deaths significantly by 2025.

“Stop hitting these people and leaving the scene,” said Owens.

Many hit and run cases go unsolved, but Owens may at least find closure that others don’t receive.

Resolution for her and Woon’s son who was never able to meet his dad.

“My grandson was born a day after Christmas and is seven-months-old, that is set up for failure because he will never have a father,” said Owens.

As she waits, she hopes drivers will be more away of their surroundings and that justice will be served for her son.

The city is also helping memorialize those killed in traffic incidents. A new program is being unveiled September 1, 2019.

Councilmember Bob Blumenfield with the Los Angeles Police Department will put up new street signs in memory of those killed while riding bikes.

For example, signs will read, “Yield to bikes. In Memory of.”

AAA also has these tips for safer driving to reduce traffic deaths: