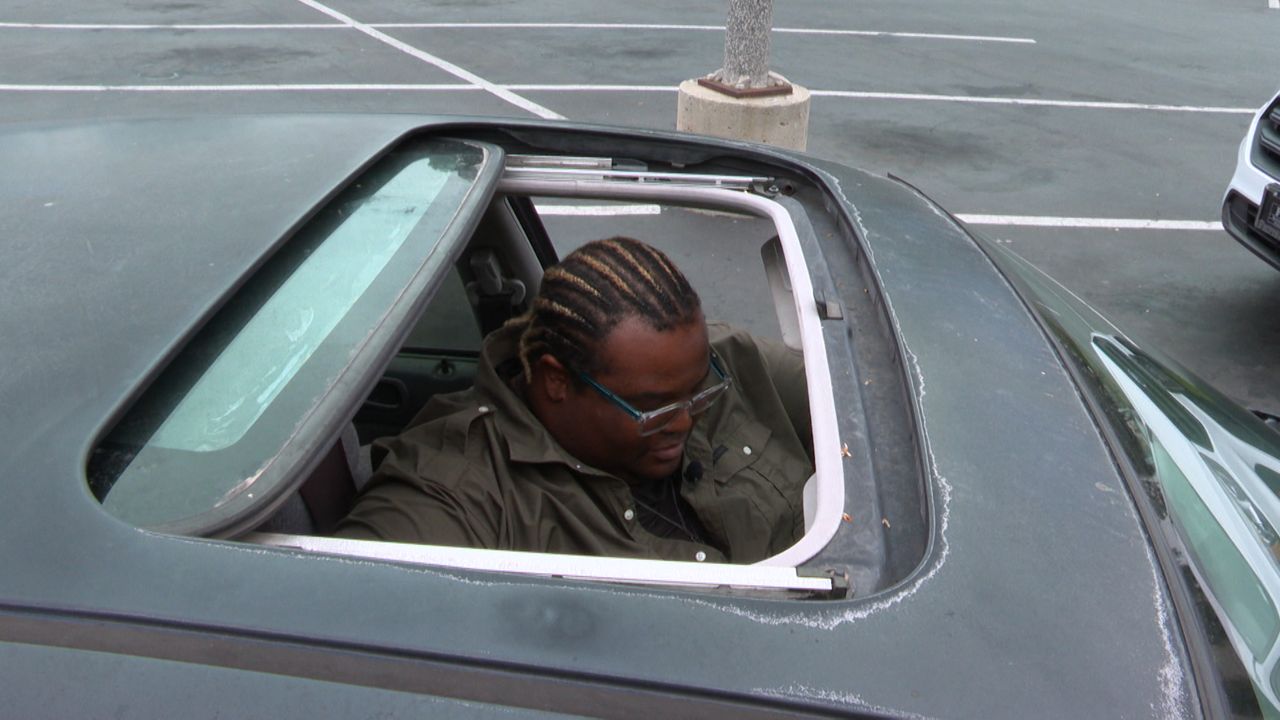 CYPRESS, Calif. — For tens of thousands of college students in America, the toughest test they face is a lack of housing.

Worrying about where to sleep or how to afford their next meals could jeopardize their chances to succeed. Fortunately, there are college campus faculty members who know about their students’ worries and are working to address this issue.

Twenty-nine-year-old Kenyun Rone enrolled as a full-time student at Cypress College in Cypress, Orange County, in 2017. Becoming a college student was a big deal for Rone. He had grown up in the foster care system in Orange County and was couch surfing at his friends’ homes while he went to school.

“The toughest part is waking up the next morning, getting ready and coming to do what I got to do and pretending like I have a normal life like everybody else,” said Rone.

On nights where it got too noisy at the place he was staying at, or if plans to let him sleep over fell through, Rone says he slept in his car, an older Honda Civic model, which he says he spent more than $1,000 from his financial aid money on.

Despite all the tough times he had to endure, Rone believed in education and that earning his degree could help him break the cycle of homelessness.

“It’s hard. It really is. Sometimes the armor wants to break and sometimes you just want to shout out at the rafters, but you can’t. You got to stay focused,” said Rone.

He isn’t alone. Cypress College participated in a survey in 2018 that looked at the state’s community college system. The study showed about 14 percent of students reported being homeless in the last 12 months, 44 percent of students couldn’t afford food, and about 55 percent percent struggled to pay their rent.

Housing and food insecurities were even higher for African American and LGBTQ students.

“The old idea of the starving student, which we would always sort of laugh at, like every student has a bad diet and doesn’t have a lot of money and lives on top ramen. This is no longer a situation that is amusing,” said Cypress College President, Dr. JoAnna Schilling.

Schilling has been a part of the school for the last two years. She says she often walks around campus and strikes up conversations with students. It’s way of finding out what students are really going through and what the college can do to help them meet their basic needs so they can focus on their education.

The college president started working with her team to create ‘grab and go’ snack stations in the different division offices on campus where students can literally grab granola bars and coffee when they need food. The school also opened its gym for students in need of showers and opened a food pantry. President Schilling says she is also working with local agencies to find more affordable housing options for her students.

“Starting this fall in 2019, we’ve entered into a new agreement with Pathways of Hope and soon we’ll be having fresh food delivery. We’ll have a food service navigator and we’ll be able to enhance and focus more on the nutritional content of our products,” said Dean of Kinesiology/Athletics and Dean of Student Support Services at Cypress College, Dr. Richard Rams.

The college is currently expanding the food pantry into a bigger space. With help from Pathways of Hope, a non-profit organization based in North Orange County, the new pantry will have more nutritional food options and a service navigator on site who will help students get into housing and connected to resources in the community.

These services and the team at Cypress are reasons why Rone says he chose to study at the college. He says he’s proud to call Cypress “home” for the last two years.

He’s heading to Cal State University Dominguez Hills in the fall and plans to major in psychology.

“My biggest dream is to hopefully set up an on-call therapist that can drive around with beat cops. We can’t expect them to also go to school for psychology and know how to defer if the person is having a mental breakdown or if they’re a criminal or if they’re just strung out on drugs,” said Rone.