El Salvador: What's Behind the Mass Exodus to the US?

EL SALVADOR — Thousands of Central American migrants seeking asylum continue to arrive at the Southern Border of the United States, with many of them fleeing from the Northern Triangle nations of El Salvador, Guatemala and Honduras.

Just what is it that causes so many to leave their homeland and attempt the treacherous, nearly 2,000-mile journey to the U.S.?

Spectrum News traveled to Central America’s most densely populated country of El Salvador. There, we met with families and children who wish to build a better life outside of their country, but struggle to make ends meet, let alone to make that dream a reality.

Watch the series of stories in the video player above.

A mother of three preps dinner every night for homeowners who, unlike most Salvadorans, can actually afford a housekeeper.

She dreams of a day where she can afford to send her kids to the United States.

She lives a couple hours outside the capitol of San Salvador. In these areas, almost all the families have so little that no one even bothers to beg for anything, unlike what you would see in more touristy spots.

Instead, they sell goods they produce themselves, like fresh tortillas, mangoes, coconuts, and even iguanas.

De Carmen works 12 hours a day, cooking and cleaning to earn just $20 a week. She walks several blocks to the houses she takes care of yet still feels blessed to even have a job.

“The little money we make, it’s just barely enough to survive,” De Carmen said. “And not enough to do anything else.”

El Salvador is Central America’s smallest country. De Carmen is among the 6.4 million people who work and live there, making El Salvador the most densely populated country in Central America's Northern Triangle, which also includes Guatemala and Honduras.

The country is shaped by a history of civil unrest, with a growing presence of gangs and violence. Even De Carmen’s daughter and sons have seen numerous street fights just walking to school.

“My oldest son, I tell him when he leaves to be careful,” said De Carmen. “I tell him to please take the youngest daughter and bring her back safely, because I can’t leave early enough to go and get her. But at the same time, she is big enough and has to start learning too, to take care of herself, just a little.”

Thousands flee from El Salvador every year with some making the nearly 2,000-mile trek to the U.S. border.

In 2014, the U.S. saw a spike in Salvadoran asylum applicants. As of, 2016, about 1,387,000 Salvadorans had settled in the states. That’s one in every seven Salvadorans who have fled to the United States.

"Thats the same idea that I had,” said De Carmen. “But in the end you get this fear because so many unpredictable things could happen along the way and that's the fear we all have."

De Carmen is scared of not being able to finish the journey, or that she or her family members wouldn’t be able to muster the resources and food needed to survive the daunting trek to the United States border.

De Carmen’s daughter, Milagro, tries to help her mom during the long work hours. De Carmen said she wants for Milagro to one day have an opportunity to live a different life.

“Te protege de todas las cosas que me pueden seceder,” said Milagro, Carmen’s 11-year-old daughter, which translates to: “She protects me from all the bad things that can happen.”

De Carmen said that although life in the U.S. seems unattainable at times, she’s determined to hold onto the hope.

“That's the dream right? But like I told you, sometimes wanting something doesn't do anything, because I had ideas of leaving but their dad didn't let me,” said De Carmen. “He didn't give me the signature I needed so that I could leave, but we'll see. God help me, maybe one day if God makes me so lucky.

Milagro said at the very least, she hopes she can travel to the U.S. to make money and send support to her mom. 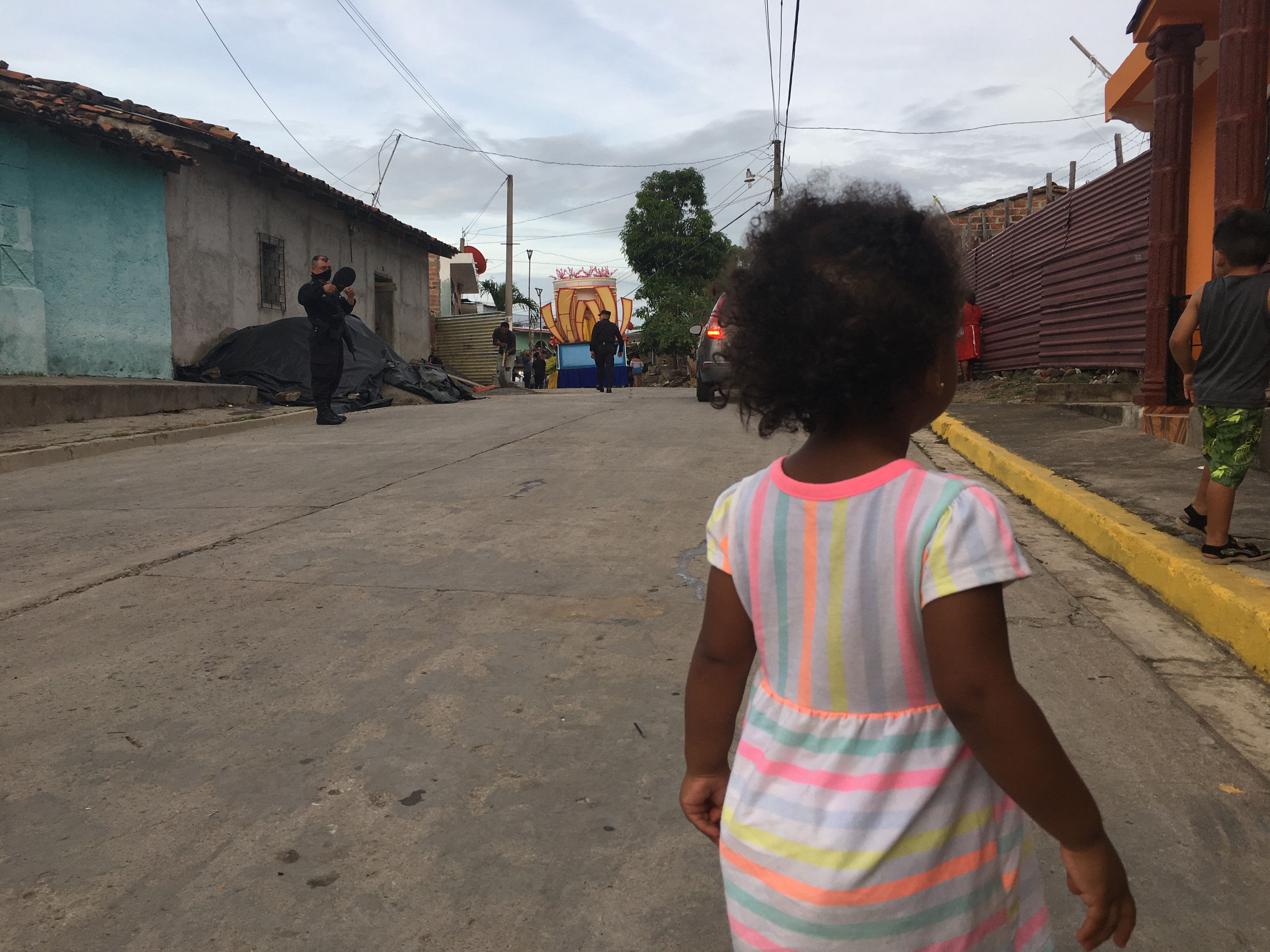 A major factor behind the violence seen across the Northern Triangle is the tremendous poverty in the region. Many of the people who live there simply have no way to escape the cruel cycle of the economy.

A simple purchase could mean foregoing a necessity.

“Very expensive,” said one grandmother, Mercedes Henriquez, who immigrated to the U.S. decades ago.

Henriquez was born and raised in El Salvador. She grew up in a big family, surrounded by countless stray dogs, dirt roads, and crowded buses. She, like everyone around her, didn’t have much.

“A lot of people here, very poor,” said Henriquez. “They cannot go to the store to get whatever they want.”

She had fallen in love with the boy down the street, Jose. They decided to immigrate to the U.S. and build a new life for their children.

Now coming back to visit, they see costs have gone up and people are still in dire need. They were shocked to find the prices similar now to those in the United States, especially for imported goods.

“Some things are almost the same as over there,” said Henriquez.

Some local produce can be a little cheaper, but gas and technology can cost more. In many market places, items like toothpaste, chocolate, and chips are all priced comparably to what they would be in the United States, even though wages here are substantially lower.

“It’s really hard you know for these people,” said Jose.

Just under 40 percent of Salvadorans live in poverty, which equates to somewhere less than $4 or $5 a day, according to the World Fact Book by the CIA. The annual minimum wage is around $2,100, although minimum wages vary across different industries.

It’s a struggle all too familiar to Jose. He used to be a Salvadoran police officer, earning just 800 pesos a month, which is about $45.

“I know how it is, you know,” said Jose. “I remember how it was before I emigrated there, I know how they feel, it’s really hard for those people.”

Monthly rents for Salvadoran apartment rents range from between $450 to $750, yet medium household incomes average about $660 a month in urban areas. In rural areas, it’s about half that, according to the Ministry of Trade and Industry.

The Henriquez’ say they hope that gap closes and that somehow Salvadorans can earn more. They’re grateful they can work in the U.S. as citizens and send support back home.

“Now I feel so glad you know, and see my grandkids running around,” said Jose. “I can say thanks to the USA to give me the chance to change my life.” 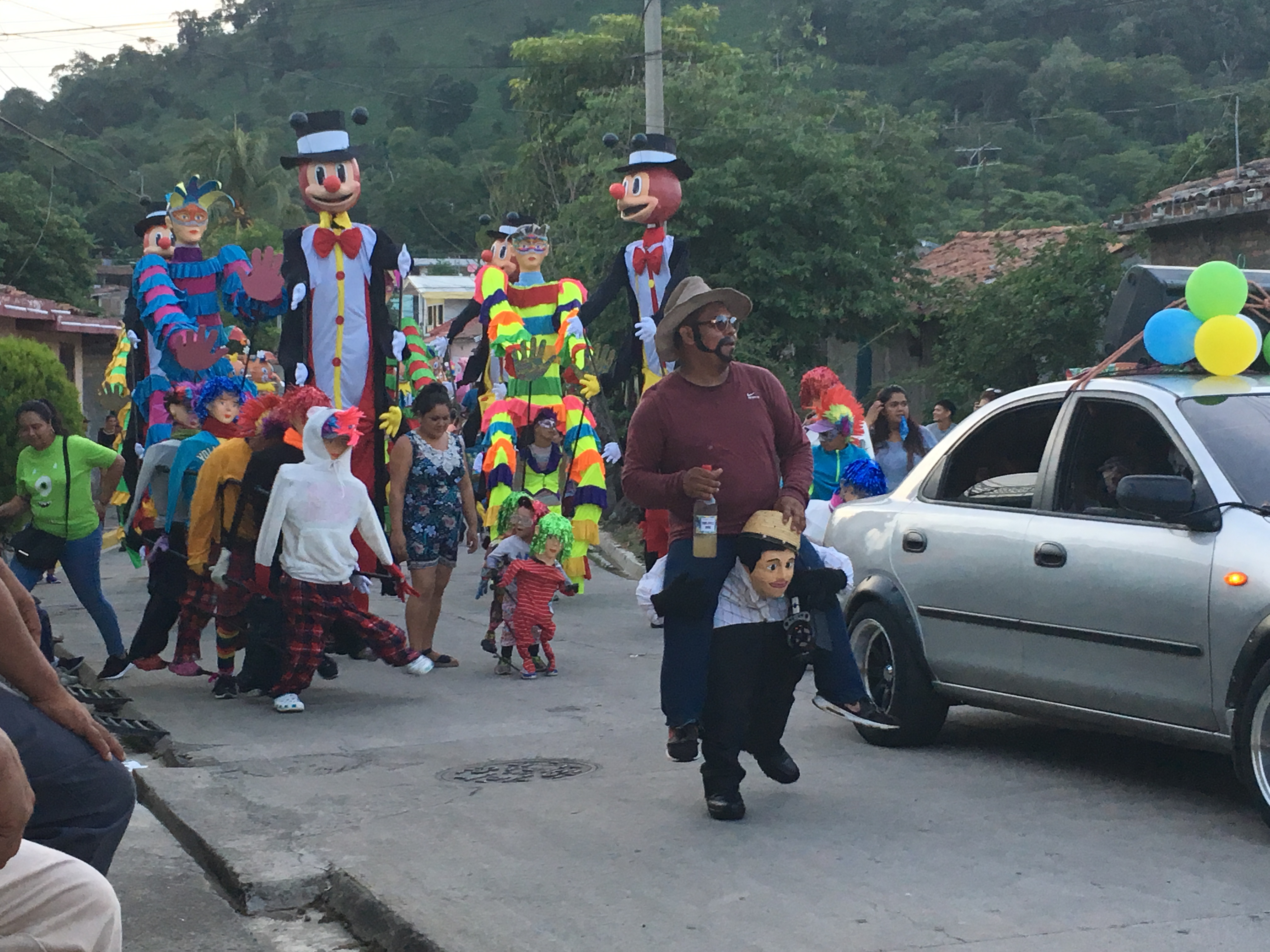 El Salvador has one of the world’s highest homicide rates, according to the World Report of 2019.

Since a civil war in the 1980's, the country has consistently ranked among the top three across the globe for homicide rates. Today, violence persists across Central America, causing many residents to question their safety on a daily basis.

But deep in El Salvador, lies a town where locals share a special bond, claiming a unique protection around the city.

The City of Apastepeque sits just southeast of the heart of the country and is known for it’s fiestas and parades.

“Porque esa son las fiestas patronales. Es un motivo de alegría de salir todos los días a la fiesta,” said one Salvadoran mother, Blanca Carmen, translating as: "It’s a good time because these are the Parties of Saints, which bring the residents joy to come out to the parties every day."

The people of Apastepeque celebrate one of their most important festivals of the year: Santiago Apostól, or Saint James the Great, who was a saint believed to have been one of Jesus’ first followers.

Parades bounce down the streets every few hours, for 10 days straight in July. Residents feel rich with culture like one young girl, Mercedes Alexandra, who runs outside her home every day to watch.

Mercedes' home lacks running water and air conditioning, despite the year-round heat. But she said she doesn’t have complaints and that she just looks forward to the festival every year.

Nearly 50,000 Salvadoran children dropped out of school just last year, due to financial or geographical issues, according to the UN Refugee Center. Most families don’t have much, but for many, like Mercedes, this festival is a chance to take their minds off of that.

“It’s really nice because we go to the park,” said Mercedes. “We stay for a little and play and I also like what the people are selling.”

The park is a central location in Apastepeque where stalls are set up though the night, full of food and trinkets to buy. The park attracts people from other towns to visit and help build up the economy.

Locals said this festival makes the town one of the safest in its own unique way.

It’s one of the only towns in El Salvador protected by the power of religion, where streets gangs are hesitant to cause a problem out of fear of divine retribution.

The festival embodies what the rest of El Salvador strives for; camaraderie, community, and peace of mind.

These stories are meant to bring us insight for what Salvadorans and others across Central America experience every day and show us what's driving migrants to our borders and why it's a focal point in today's conversation in politics.