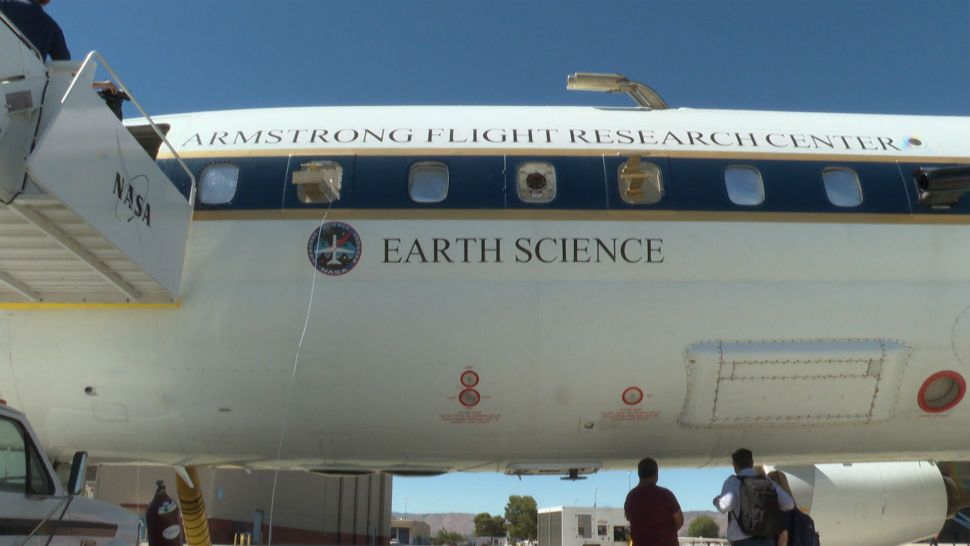 PALMDALE, Calif. – On the outside, it looks like an airplane, but on the inside it is a flying laboratory.

NASA and the National Oceanic and Atmospheric Administration have teamed up to lead a joint campaign called FIREX-AQ.  Jim Crawford, a senior Scientist for Atmospheric Chemistry at NASA, says the goal of the seven-week program is to get a better understanding of what fires release into the atmosphere and what the atmosphere does with it.

“We’ve never brought this level of information, this level of complexity to the chemistry of what’s happening with a fire," said Crawford.

FIREX-AQ involves the use of two specialized aircrafts. The flagship is the DC-8; it carries 40 scientists operating and monitoring dozens of instruments. There is also a flight crew and navigators because this is no ordinary ride. They don’t just fly over fires, they fly into the smoke, capturing samples through various inlets.

“We’re going up and down. We’re doing spirals in the atmosphere and we’re trying to map out the smoke in real time," Crawford said.

Back in the 1960s it was Alitalia plane, which means a lot of changes had to be made, although it still feels just as cramped as coach. The engines were upgraded to add more power.

“And the reason for that is to get the crews altitude even higher," Crawford said. "So this aircraft can go to 40,000 feet.”

That is nothing compared to the other plane in this campaign – the ER-2 high-altitude aircraft. That lean machine uses sensors to gather data and can travel up to 70,000 feet high. Unlike the crowded DC8, this one is a solo flight.

“Only one pilot aboard in spacesuit," explained JPL research scientist Olga Kalashnikova. "It’s almost space environment. You see curvature of the earth, you see horizon and you see fire underneath.”

Crawford says right now this project is purely academic. It won’t help fight fires or develop strategies to prevent them, but it will fill in a lot of holes.

“Ultimately the idea is to have a better understanding of fires," Crawford said. "Not just one fire or a specific event but what is the total environmental impact of fires on the atmosphere and people.”

The FIREX-AQ will include up to 25 eight-hour flights. That is a lot of data which will then be analyzed on the ground. Crawford says he doesn’t expect a eureka moment.

“Fire research has gone on for a long time," Crawford said. "We’re simply pushing the boundaries of our knowledge of fires.”

2 specialized aircrafts are flying over and into the smoke of fires to get a better understanding of what fires release into the atmosphere. (Spectrum News)