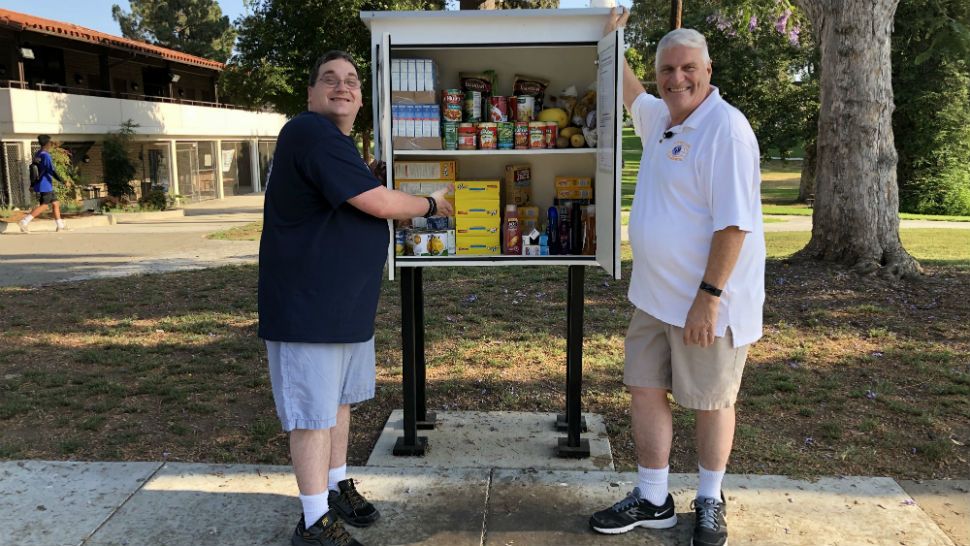 PLACENTIA, Calif. – Volunteering is a habit that Jim Kissinger and his son, Matt Kissinger, can’t quit. They swing by a store a few times a month to handpick items on behalf of their clubs as a way to give back to families who live in their town of Placentia.

Kissinger and his son purchased about $53-worth of non-perishable food items, toothpaste, mouthwash, and other basic necessities that families need, but can’t afford. The money was raised through recycling efforts by Aktion Club of North Orange County members in conjunction with the Kiwanis Club of Placentia.

Kissinger’s son is part of Aktion Club, which is a service club made up of adults living with disabilities. They collect recyclables and cash in their findings in order to raise enough money to sponsor a Blessing Box or two twice a year.

“We took these on and it really has been fulfilling because it’s a great thing. There’s a lot of need and I think it’s a great idea,” said Jim Kissinger, a Kiwanis Club of Placentia board member and advisor to Aktion Club of North Orange County.

The person behind the Blessing Boxes is Marilyn Anderson, a longtime Placentia resident.

“They’re just honor system Blessing Boxes. You give what you can and you take what you need,” said Anderson, an assistant leader for a community service group called Love Placentia.

Anderson says she was watching a news story on television when she saw a piece about Blessing Boxes, which inspired her to bring the idea to her group and the Placentia City Council. Her group members and the city council approved her idea.

Love Placentia is a service group which encourages residents to do acts of kindness to beautify and improve the city. They host dozens of events every year including longer term projects like the Blessing Boxes, which aims to help families or people who are struggling to put food on the table. According to the United States Census Bureau, an estimated 9 percent of families in Placentia are living in poverty.

“Every time I’m here, someone is always coming to the boxes to get what they need. They don’t take everything. They just take what they need and it warms my heart to know that this is here for them and they can have access to it,” said Anderson.

There are currently Blessing Boxes at five different locations in Placentia:

Currently, Love Placentia is looking for people, families or organizations to sponsor the boxes for a week or month to keep up with the demand. Sponsorship would include restocking the Blessing Boxes, cleaning up around the area, and making sure the boxes are maintained.

If you are interested in sponsoring the Blessing Boxes please contact Marilyn Anderson at marilyn_and@att.net or visit https://www.loveplacentia.com/blessing-boxes.