Scent Designer Uses Smells to Set the Stage During Plays

"It’s small right now but one day it will be very, very big," said Visscher about his home-based workshop in Hollywood.

Visscher's company, Cantrip Candles, caters to a very niche market: people who play tabletop games like Dungeons and Dragons. The scent of each candle is designed to evoke a setting.

“It smells like whiskey and firewood," Visscher said, opening a tin labeled Blackhound Tavern. "You light that about an hour before you start to play and when your players come in, it smells like a tavern.” 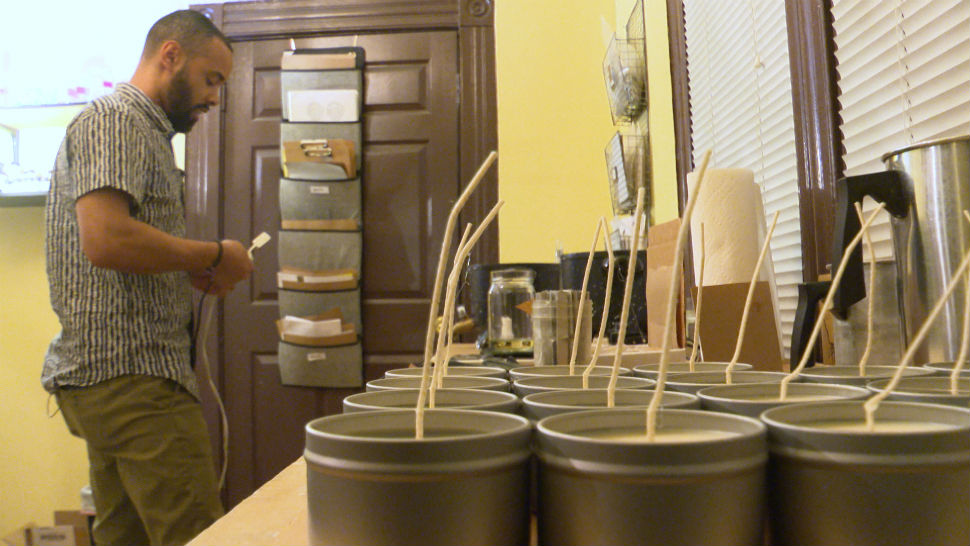 The tavern effect was exactly what Graham Wetterhahn was going for as the After Hours Theatre Company prepared to mount what they call a multisensory production of The Last Five Years. The idea is to have scents waft in during pivotal moments to heighten the emotions and atmosphere.

“We want it to be noticeable but we don’t want it to be overwhelming," said Wetterhahn, the theatre company's founder and executive producer. "So the key is it for be subtle and feel natural.”

Together they came up a few key aromas for places and characters in the show.  The tricky part, though was distributing those smells on cue. For that, they developed their own system – a series of 7-inch-by-7-inch plywood boxes filled with scent infused beads.

“There’s fans in the back that turn on and blow the scent at the audience," Wetterhahn explained.

Back in his home workshop, Visscher, who is also an actor, is surprised by where his candles are taking him.

“This was not a path I expected but like, that’s great! That’s awesome,” said Visscher.

While there isn’t a Tony Award for scent design yet, Visscher thinks maybe one day there will be.

“There should be a Tony for every facet of theatre," he said, "and to be honest, I think I’ve got a head start.”

Visscher’s dream is so sweet he can practically smell it.

The Last Five Years runs through July 14 at The Actor’s Company – The Other Space in West Hollywood. Ticket information can be found here.