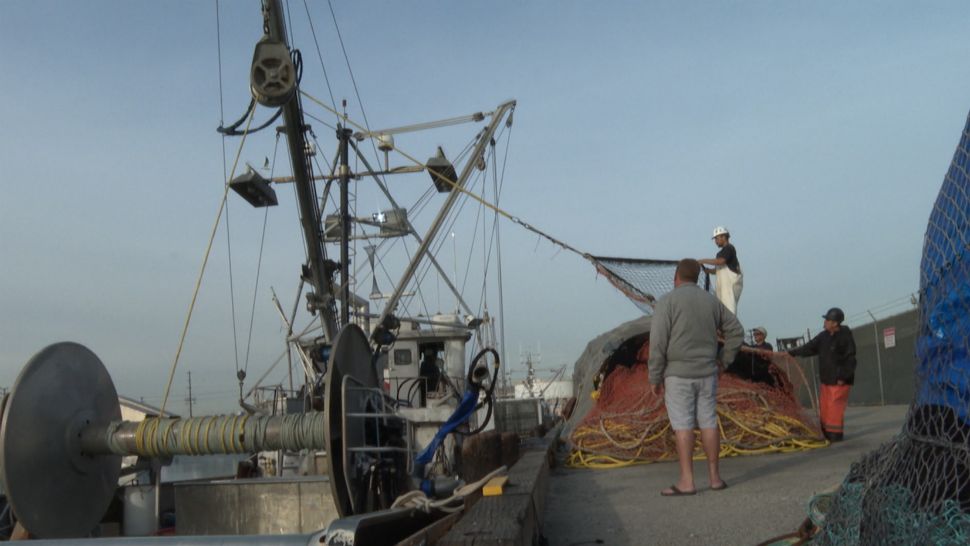 SAN PEDRO, CA – Based out of San Pedro harbor, Nick Juril got his first fishing boat in 1982 and has been making a living ever since with a variety of catches including squid, mackerel, and sardines.

“I grew up with the fishery,” said Juril on the deck of his current boat, Eileen. “[It] goes back to my dad's childhood. There's still a handful of us left and we're still, you know, hanging on. It would be a shame to see it go away.”

Sardine stock assessments are based primarily on acoustic trawl surveys conducted by the National Oceanic and Atmospheric Administration. According to the administration, the sardine biomass has fallen short of the 150,000 metric ton threshold needed for commercial fishing to commence. Therefore, the Fisheries Management Council has prohibited a directed sardine fishery since 2015 to allow for stocks to bounce back.

“In 2014/2015 we weren't seeing a lot. But since the water kind of changed, the water warmed up a little bit, there's a lot of sardines around right now,” explained Juril. “So, we're hanging on, but not having the sardines has been really, really tough.”

Joe Ferrigno, one of Juril's neighboring fishermen, says the loss of the sardine catch has taken as much as half of his business away.

“There was some years we fish sardines all year long,” said Ferrigno. “Now, we go farther, and we work a lot harder to try to catch a little bit of squid to make up for it.”

Besides human consumption, sardines also feed the pet food market and act as live bait in the multi-billion-dollar recreational fishing industry. They are also a food source for larger marine life, like sea lions which can be seen coming into harbor looking for fish.

Juril says the acoustic trawl surveys are flawed because they do not take near shore measurements, which is where he says fishermen are seeing stocks of sardines.

“These fisheries are managed on best available science,” said Juril, “and when the science is bad, it’s not doing anybody any good.”

Juril has been working in conjunction with the Department of Fish and Wildlife to do near shore aerial surveys. A spotter plane will take images once a school is spotted and radio back to the boat with location. The school is then scooped up with the boat’s purse nets and the yield will be measured and correlated to the images so that future estimates can be made more accurately.

“Most, or almost all almost all, of [the sardines] are always fished from 25 meters into surf line,” explained Juril.

Another neighbor, Jamie Ashley, is a bait hauler, also participating in the aerial surveys. The Pacific Fishery Management Council does allow for a few thousand tons of sardines to be harvested as live bait, but Ashley is worried that too could be shut down.

“The corns ripe, ready to pick,” said Juril. “There's corn all over the place and some scientists are saying, ‘No corn this year. Can’t pick it. Sorry.’ So we're trying to do what we can do to add to the science so that they do have better information and we can get a better assessment of abundance.”

Juril will haul other catches like squid and continue the near shore surveys hoping to add to stock assessment data and end the moratorium on sardines, but scientists aren't optimistic and worry sardine stocks will take years to recover.