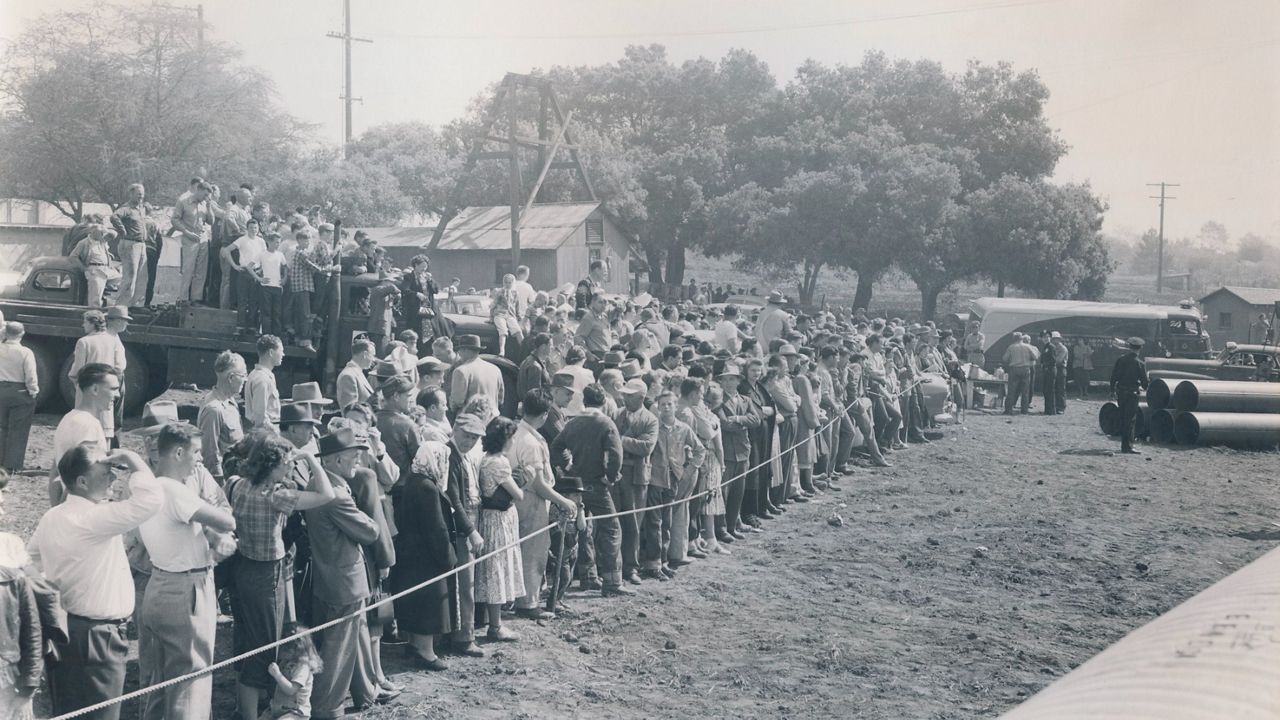 People gathered en masse to witness the would be rescue of three-year-old Kathy Fiscus from the bottom of a San Marino well. (Photo courtesy of Angel City Press)

EDITOR'S NOTE: This story is a collaboration between digital journalist William D'Urso and multimedia journalist Nic Cha Kim. To watch the video report that accompanies this story, click the arrow above.

LOS ANGELES — Kathy Fiscus’ tragic fall down a San Marino well in 1949 touched off a frantic push to rescue her — and an intense media event broadcast around the world.

The tragedy of the blond-haired blue-eyed little girl’s fall was matched only by the scale of interest in the grim event and the oddity of a sprawling list of sub plots.

It’s all collected in USC history professor William Deverell’s new book titled Kathy Fiscus: A Tragedy that Transfixed the Nation. Published by Angel City Press, the book dives into the many ideas rescuers developed to try to rescue the little girl. Spurred on by cries from the three-year-old from hundreds of feet down, the ideas ranged from hypothetical engineering methods to the ludicrous.

Ideas included drafting an actor who played a munchkin in The Wizard of Oz and filling the well with water to propel the child upward. All attempts were covered live by TV.

Whatever empty space was left by the drama of the event was easily made up for with spectacle. And it became known as the founding breaking news event in what would become a long history of wall-to-wall TV news coverage.

Breaking news has become a major touchstone of every daily news organization and can be richly rewarded with large audiences.

The Fiscus tragedy set the stage. Concerned and curious people showed up in droves, eventually cordoned off by ropes. Parents, Deverell said, showed up with skinny children, offering them to be lowered down to retrieve the little girl.

Two TV stations were there to record the events 24-hours a day.

“This shows you can take those cameras out and about and there’s always something happening,” he said.

This was new for TV. Deverell said the broadcasters weren’t even sure the cameras could run that long without melting. They managed through it, televising a historical event.

Since then, the news media’s powers of immediacy have only expanded. When Fiscus fell down the well, newspapers were dominant with huge circulations, large annual profits carried by healthy classified section revenues and endless advertising. TV channels didn’t have a tradition of live broadcasting or any staff – except sports reporters – used to delivering off-the-cuff commentary.

The standards for which breaking news applies have changed, no longer confined to “hard news.”

News organizations have ratcheted up their breaking news abilities, piling resources into being first. TMZ has long set the standard for speed in entertainment journalism. The Bloomberg terminal, an expensive securities trading service that delivers information with lightning speed, is what made former New York City Mayor Michael Bloomberg a billionaire.

Even sports have been affected. The Athletic sports websites have hired away experienced, deeply sourced reporters who are regularly first to break trades and player signings. ESPN restructured its basketball coverage after a layoff binge, hiring Adrian Wojnarowski, a former Yahoo Sports hoops reporter legendary for his scoops.

More consequential, perhaps, than staff and technology has been the advent of the 24-hour news channel. The Fiscus tragedy was the first such 24-hour broadcast as two TV stations understood the scale of the news event and the interest that accompanied it. More and more newspapers and TV stations became equipped for conveying larger amounts of complex information quickly.

And breaking news only grew as a moneymaker. News organizations consistently see their highest ratings or viewership numbers when major news breaks. With 24-hour news channels comes pressure to fill every hour with relevant but news.

“I think so many viewers and readers don’t take stock in the phrase any more because just about anything can be called and will be called breaking news,” said Suzanne Lysak, an associate professor of broadcast journalism and documentary at Chapman University. “I think there needs to be better judgment on the part of newsrooms on what is relevant breaking news.”

She noted that Twitter has become the forum of the most immediate updates and is know for spotty accuracy.

Today, reporters have a slew of ways to immediately reach audiences. Cloud storage allows reporters to quickly send large, high quality video files. Writers can file from laptops linked up to smartphone hotspots. Reporters can even take quick stand-up videos of themselves on cellphones, which are instantly uploaded to Twitter or Instagram. Most stories can now be immediately reported through social media.

The explosive media event covered Fiscus’ death, and the eventual removal of her body. The event gave KTLA reporter Stan Chambers a calling card story the rest of his career. And breaking news became an instrumental part of every daily news organization.

Twenty-eight years later, the world would again become transfixed when another baby fell down a well – this time, 18-month-old “Baby Jessica” McClure. Unlike Kathy's, her story would have a happy ending.

Deverell said his book on Fiscus is a departure from his scholarly studies into California and the American West.

Author William Deverell will hold an event at Vroman’s Bookstore on March 16. To make a reservation, log on here.