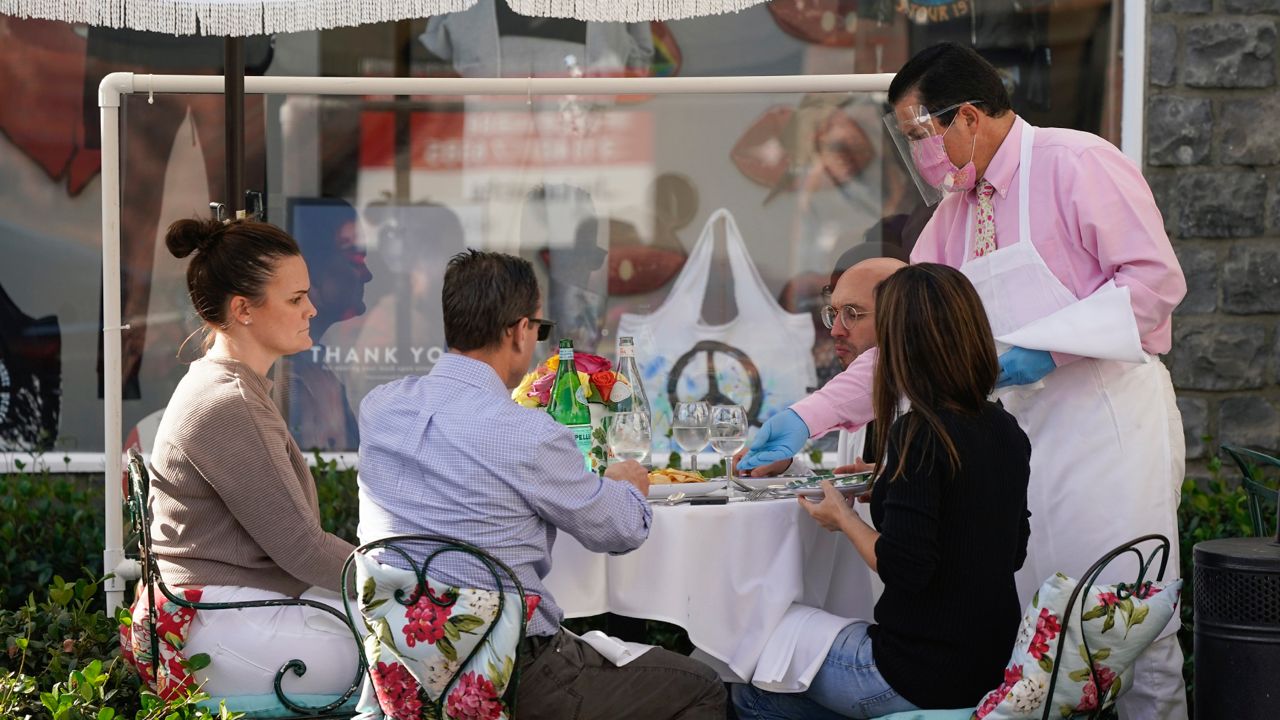 Diners are served outside by a waiter wearing a mask, face shield and rubber gloves in the West Hollywood, Calif. on Nov. 18, 2020. (AP Photo/Ashley Landis)

EDITOR'S NOTE: Multimedia journalist Lauren Pozen spoke with Marco's Trattoria owner Mark Capanni and West Hollywood Mayor Lauren Meister on the impact the minimum wage increase will have on local businesses and its workers. Click the arrow above to watch the video.

WEST HOLLYWOOD, Calif. — Despite opposition from local business owners, the West Hollywood City Council has voted to institute what will become the country’s highest minimum wage.

Starting in January, West Hollywood hotel workers will be paid $17.64 per hour, with annual increases (the first of which takes place on July 1, 2022) tied to Consumer Price Index adjustments. Other businesses within the city will have their minimum wage stepped up over time: The wage floor for “small businesses,” with fewer than 50 employees will be set at $15 per hour starting Jan. 1; for “large businesses,” with 50 or more employees, the minimum wage will start at $15.50 per hour.

The ordinance also ensures that all full-time workers in the city will be given at least 96 hours of paid leave annually, as well as 80 hours of unpaid sick leave. Part-time workers will also be provided time off proportional to their full-time counterparts.

The biggest exception to the pay increase is for unionized workers who, under a provision in the ordinance, will continue to be paid according to established Collective Bargaining Agreements that will supersede the ordinance.

“I want to ensure that all voices are heard in this discussion and that workers in our city are provided a wage that they can live on, that our businesses can recover in a post-COVID economy, and that our residents on limited incomes are able to afford goods and services in our city,” said West Hollywood Mayor Lauren Meister. “I believe the approach we’ve crafted to phase implementation of the citywide minimum wage over time moves us forward.”

The city council approved the first reading of the ordinance, which was tinkered with and workshopped throughout the discussion, just after midnight on Nov. 4. However, despite the late hour, it was clear that a majority of the council was not interested in punting the vote to a later meeting.

The West Hollywood Chamber of Commerce was outspoken in its opposition to the ordinance, and Chamber President/CEO Genevieve Morrill expanded on her disappointment to Spectrum News 1 on Thursday.

"The business community and the city have always had a great working relationship and we are surprised that council did not allow for more thoughtful discussions with the businesses. While we appreciate that council did de-escalate the implementation of the proposed wage increase with the introduction of a phased approach, the increase is still too rapid for businesses struggling to pay back rents and the higher costs brought on by global supply issues," Morrill said.

She added that she knows of at least one business that is already looking to leave WeHo for Los Angeles and that two other businesses, about to sign leases, called realtors to pull out of the deal.

A handful of residents speaking on Wednesday night noted that their comments dissenting with the WeHo Chamber were deleted from the discussion. When asked for comment, Morrill called those complaints "red-herrings," adding that there are "many opinions posted that are not deleted. However, if we feel the discourse is hurtful and harmful to our businesses, we rightfully will remove these posts."

Councilmember John D’Amico may well have been the most passionate person among a five-person panel that was increasingly emotional about wage issues among its constituents.

“Let’s talk about labor. The system of importing cheap labor: I call it ‘wage apartheid,’” D’Amico said during a lengthy comment indicting the city for “crafting the myth” that the city would take care of “laborers, workers and creatives.”

“As rental prices skyrocketed, fewer and fewer hourly wage workers were able to live or move here…it never worked for working people,” he said, noting that fewer than 10% of West Hollywood’s approximately 20,000 jobs pay enough for people to live in the city.

The majority of public comments on the item came from business owners — mainly restaurateurs — who claimed to support the wage increase but felt that the City Council was moving “too fast.”

“We’re not lying to you, and we’re calling it right now: this is an unsustainable wage,” said Gracias Madre owner Cary Mosier. “Anyone that is paid minimum wage in a restaurant is given tips, and similar to all the restaurants that have shared tonight, servers are making between $40 to $50 an hour in my restaurant…secondly, I want you to understand that this is going to increase our workers compensation insurance and it’s going to increase our payroll taxes.”

But, as Councilmember Lindsey Horvath noted, tipped wages aren’t available for people who must call out sick.

“Even for someone who makes $40 an hour with tips, they will still experience about a 63% wage loss by calling in sick, even with paid leave, because they’re not going to be paid that tip income while they’re home sick, so they are incentivized to come to work sick, so they don’t miss out on those tips,” Horvath said. “When I think about it from the perspective of the person who is working tirelessly in your business, my hope is that you value them enough to want to make that sacrifice so they can continue to be part of your team.”

In a staff report, the city tacitly acknowledged that the wage increase is only a step in the right direction for workers, citing a Massachusetts Institute of Technology wage calculator that determined that $19.35 per hour is the appropriate living wage for a single person with no children.

Though it may not be an ultimate solution, Councilmember John Erickson said that local front-of-house restaurant workers told him the wage increase might allow them to “quit one of my three jobs that I have.”

The ordinance is expected to return for its second and final approval at the city council’s next meeting, scheduled for Nov. 15.