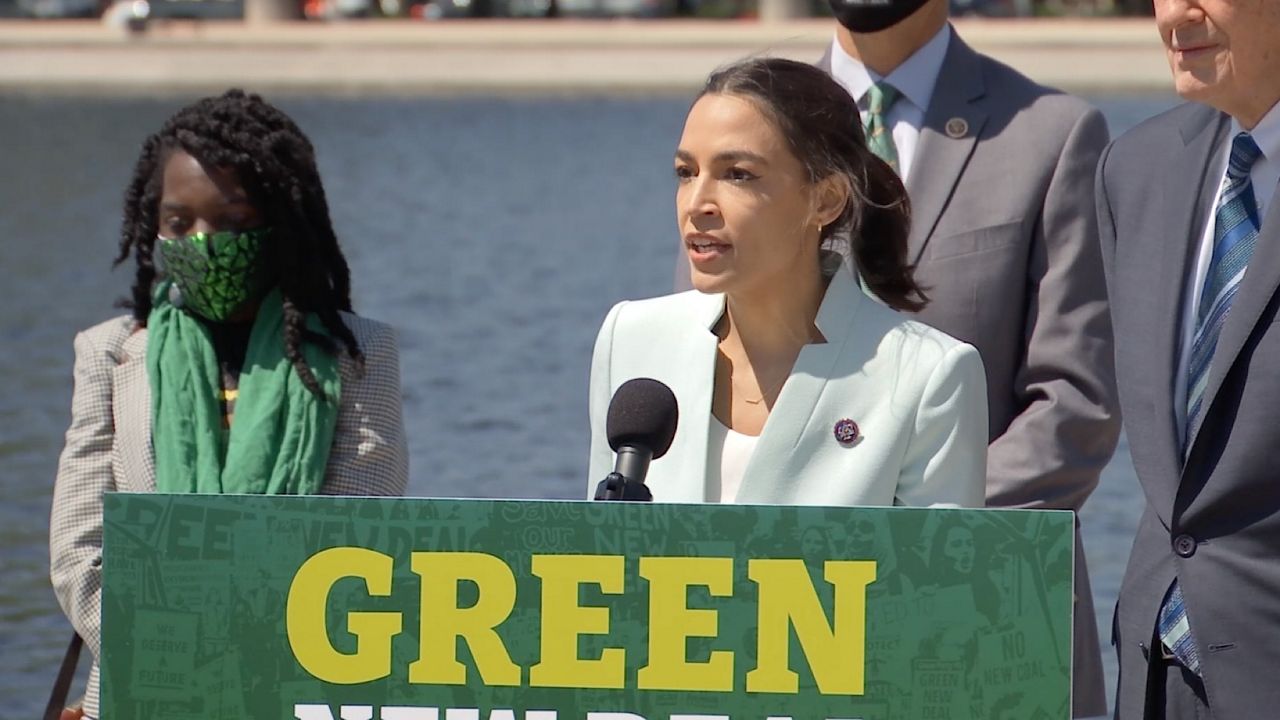 Progressives on Capitol Hill are calling for President Joe Biden to go bigger and bolder to combat climate change as they formally reintroduce the Green New Deal, a sweeping climate overhaul that has served as a rallying cry for some Democrats, but draws significant criticism from Republicans.

The plan is the signature policy proposal of Congresswoman Alexandria Ocasio-Cortez, who represents The Bronx and Queens. She has long touted it as a way to confront what many argue is the central challenge of the future.

“The greatest risk is doing nothing on climate, or doing too little,” she said at a Tuesday press event to reintroduce the proposal.

Alongside her clean energy plan this Congress is a host of related legislation. One directs climate-related funding to state and local governments. Another creates a civilian corps of workers nationwide devoted energy efficient projects.

Reintroducing the #GreenNewDeal today on Capitol Hill, @RepAOC rails against the “false notion we have to choose between our planet and the economy” @NY1 pic.twitter.com/bRW4An4lwj

The rollout comes as lawmakers on Capitol Hill are jockeying over what to do with the Biden administration’s more than $2 trillion infrastructure proposal, which calls for spending on electric vehicles and weather resilient infrastructure.

Progressives have praised parts of it, and some Democrats, like Rep. Tom Suozzi, have suggested that the Green New Deal push helped lay the groundwork for the president’s focus on climate action in his plan.

But Suozzi, Ocasio-Cortez and other backers of the Green New Deal argue the White House needs to think more expansively. Suozzi said that while the Biden infrastructure proposal is “big” and “bold,” he would “like to see more.”

“Do we intend on sending a message to the Biden administration that we need to go bigger and bolder? The answer is absolutely yes,” Ocasio-Cortez said.

Take public housing, for example. Included in Biden’s initial plan is $40 billion for repairs nationwide. Several New York Democrats have pushed to double that, noting that the $40 billion would just cover the backlog at the New York City Housing Authority.

Ocasio-Cortez is looking to go even further, introducing a bill with Sen. Bernie Sanders labeled the “Green New Deal for Public Housing.” It could devote well over $100 billion to retrofit and upgrade housing nationwide, with the goal of also making the public housing stock energy efficient.

Since it was first introduced, the Green New Deal has faced stiff pushback from Republicans in part over concerns about what it could mean for the economy. That criticism has also at times been echoed by some members of Ocasio-Cortez’s own party.

It remains to be seen whether the Biden Administration’s renewed support for combating climate change will help turn the Green New Deal into more than a plan.