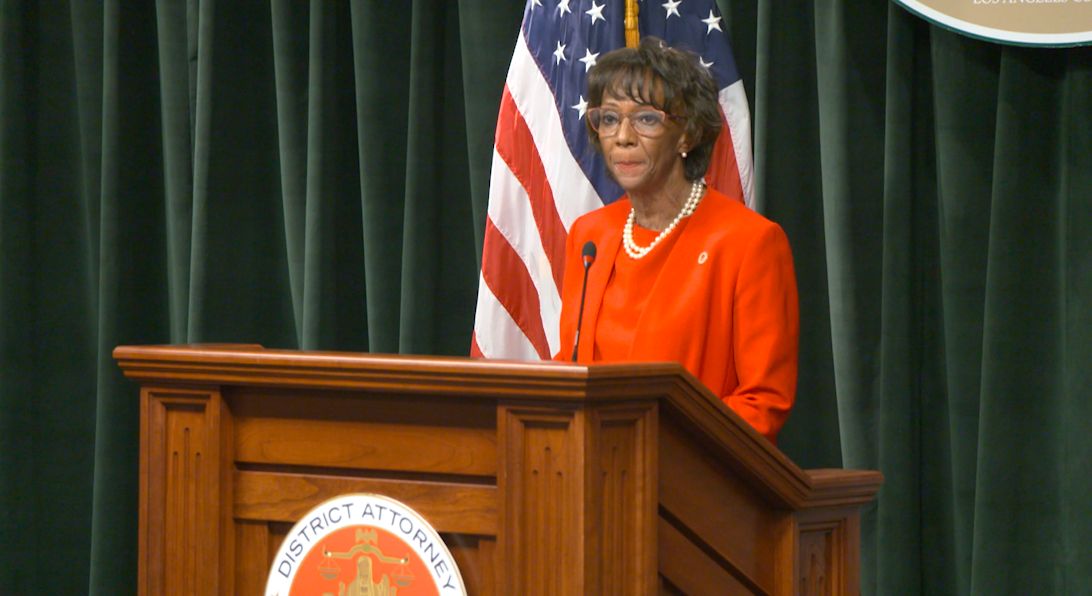 "This is a victory for the families of those who have been murdered by police," Branch said, standing before a group of other activists. "If you don't do right by the people, we're coming, and were going to hold you accountable."

Branch said she became involved in criminal justice activism in college when the case that captured national attention was George Zimmerman's acquittal in the shooting of Trayvon Martin.

"I couldn't sit by and watch what was taking place and what I realized is those instances of murders were happening right here in Los Angeles," Branch said, adding that it was her inspiration for taking action and joining Black Lives Matter.

She felt let down by Lacey's record on convictions of law enforcement officers who killed civilians, she said.

On Friday, Branch rejoiced the moment Lacey announced her time as district attorney was over.

"I congratulate George Gascon and his team on their expected victory," Lacey said at a Hall of Justice news conference Friday. "There are still about 791,000 votes to count, but my consultants tell me that while I may close the gap between the two of us, I will not be able to make up enough based on the trending of the ballots to win this election."

Lacey stood in front of a room of clapping supporters and listed some of her proudest accomplishments and reforms as district attorney, including becoming the first woman and first African-American District Attorney in Los Angeles.

"We created a conviction review unit to investigate the claims of wrongful convictions. We created a task force to address sex crimes that were perpetrated by the powerful. We started a movement here in L.A. County that quickly spread around the United States to get people with mental illness the care they deserve and prevent them from languishing unjustly in custody or homeless on the streets," Lacey said.

She also appeared to fight back at critics who, over the last few months, amped up their accusations of bias in her office toward law enforcement at the expense of victims.

"People are individuals. And that you should not prejudge them by their skin color or their chosen occupation," Lacey said. "We must work together to make the system better for everyone without demonizing people."

At times Lacey became emotional, but for activists like Branch it had little impact.

"She's losing her job. Anybody would be a little upset about losing their job, right? But I am more so concerned about the families who have been denied justice for so long," Branch said.

Branch said she is hopeful about the progressive promises made by George Gascon, who is a former LAPD assistant chief. He held a news conference shortly after Lacey conceded.

"I stand before you committed to making lasting changes that will make our communities safer, healthier, and restore the promise of equal justice for all," Gascon said at the conference.

Branch said there would be no honeymoon period for Gascon, adding that he will need to prove himself to BLM LA to win and retain their trust. He has his first meeting with the organization next Monday.

"We are hopeful that this new DA George Gascon will hold police accountable, that he will reopen these cases, 626 of them," Branch said. "The city of Los Angeles has spoken at this point."