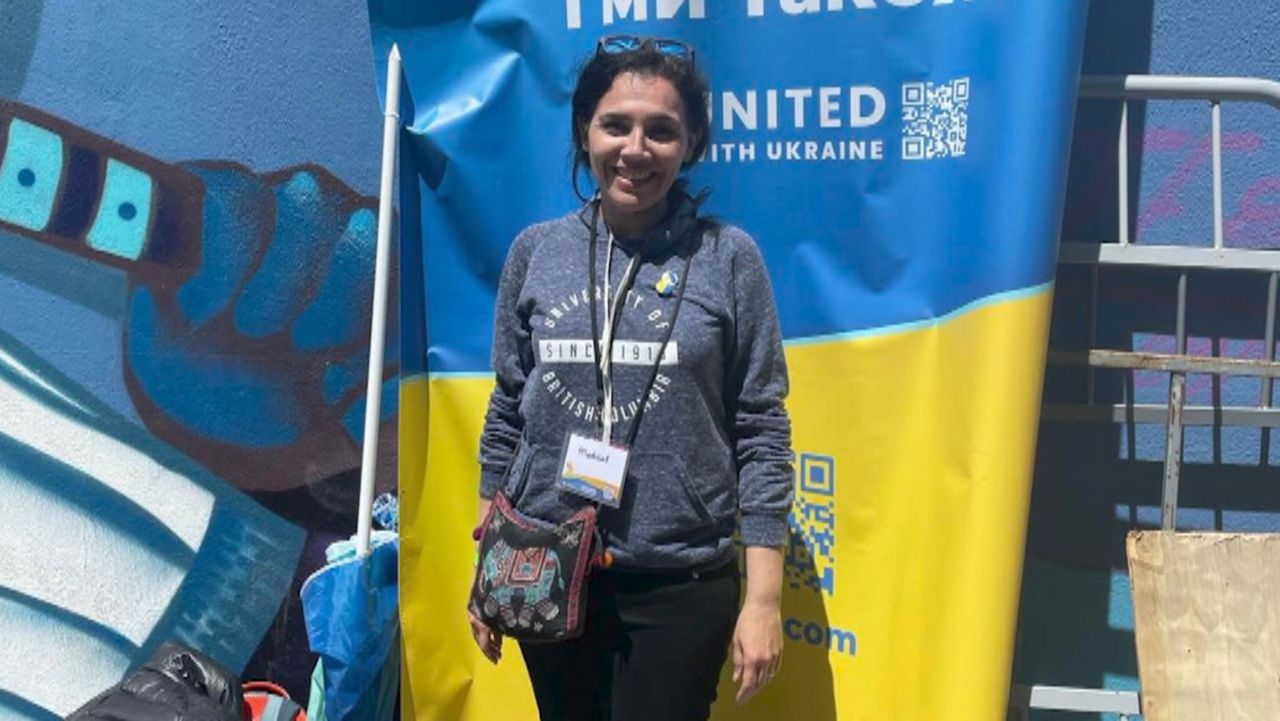 Ukrainian-American Julia Postolov-Kantor is a jazz singer by night and a psychotherapist by day. She found a way to put both careers to work, helping those in need. Postolov-Kantor recently traveled to the U.S.-Mexico border, where she used her crisis counseling skills to help Ukrainian refugees cope with their trauma. In an interview for “LA Times Today,” she told host Lisa McRee about the experience.

“I got a Facebook message from a therapist, an American therapist who said that there’s a need for more Russian-speaking therapists on the border,” she said. “She actually does this kind of crisis counseling all the time. We went together. There had been, for the past couple of months, hundreds of volunteers who created a whole program there. It’s no longer happening because now Biden has created a new system for Ukrainian refugees. But we were able to volunteer the last weekend before this particular program closed. There was a huge room with beds, play areas for children, comfort food for the people and lots of support. We were walking around and talking to families, to individuals, children, basically doing psychological first-aid.”

Postolov-Kantor shared what the refugees were dealing with from a psychological standpoint.

“Nobody was in severe trauma or crisis, but people were very anxious, very tearful, really, understandably worried,” Postolov-Kantor explained. “Most of them had just flown to four or five countries to arrive in Tijuana and were on their way, many of them to be with family members here in the U.S. Some were flying to Chicago, to New York, to San Francisco, to a relative. But having flown to five countries, it’s just so hard to imagine what they had just experienced. They were very, very stressed. Many of them were very worried about making it to this deadline because this was the last weekend before the border closed.”

The volunteers then crossed back over into San Diego and welcomed refugees as they came into the U.S.

“That was so uplifting,” she said. “Just on the other side, there was a whole other set of volunteers who were driving people to the airport, setting up hosts for them for a couple of nights before they flew to their next destination, and just welcoming them. We got to be on the other side and hug the people that we’d been speaking to just hours earlier and to welcome them.”

Observing the Ukrainian children fleeing their home country was an impactful experience.

“It was such a beautiful thing to see that the volunteers had set up stations for children,” Postolov-Kantor shared. “Arts and crafts and play areas. They were able to kind of release some of that stress the way children do, in a therapeutic way. We had bubbles for them. We had stress balls for them. There was one little boy who, having gone through five flights with his mom, was having a tantrum. We were able to get him some bubbles. As he was blowing those bubbles, it regulated him. He felt some autonomy. Just the breathing got him into a completely different state where we were able to help the mom at that time.”

Postolov-Kantor and her husband, have a band called the Paris Chansons. They perform songs in French, but also in Russian. At a recent concert, they sang a Ukrainian song, eliciting a powerful response. The Parish Chansons are performing a benefit concert for Ukraine in West Hollywood this month.

For tickets to the benefit concert, visit the band’s website.