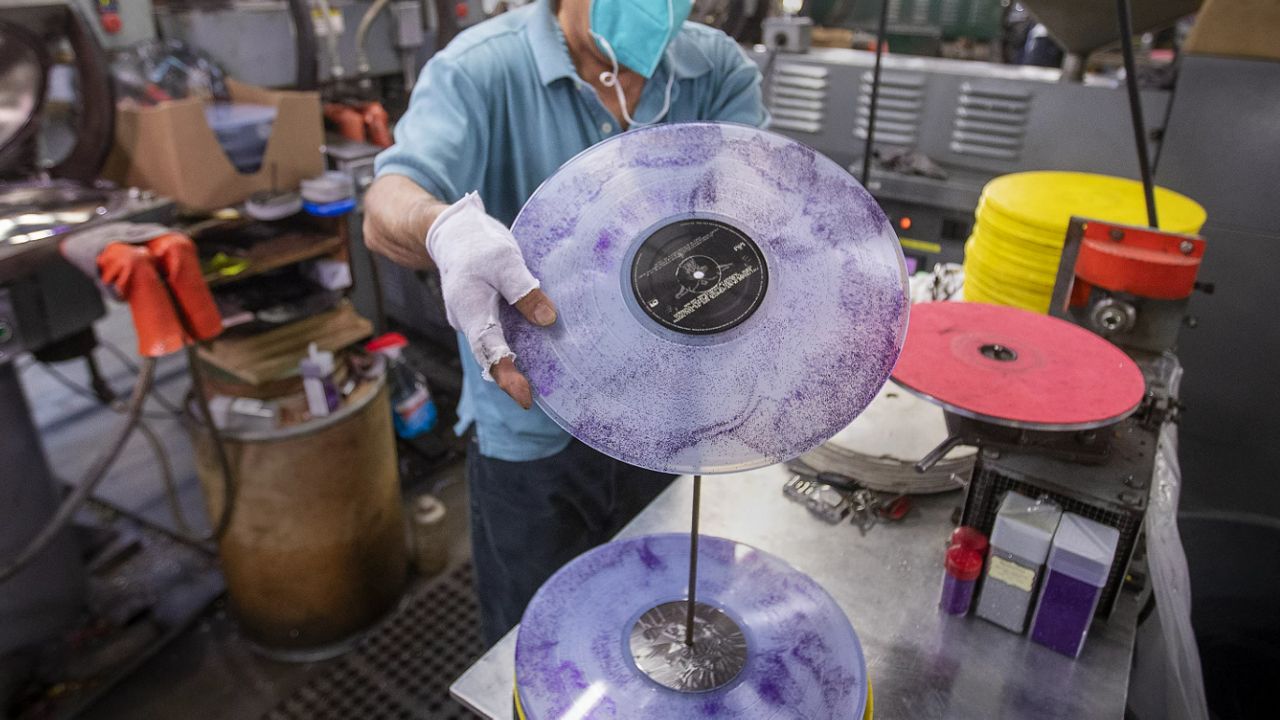 As stars cash in on vinyl, an OC pressing plant struggles to meet demand

In 2021, vinyl record sales increased by 61%, topping $1 billion worldwide, the most since 1986. Vinyl record plants have struggled to keep up with increased demand from record labels and independent artists. However, Erika Records in Buena Park, one of two pressing plants here in Southern California, remains hopeful.

CEO Liz Dunster built her pressing plant from scratch in the 1980s and is thrilled to be part of Vinyl’s ongoing resurgence. In an interview for “LA Times Today,” Dunster and other Erika Records employees shared what makes their plant unique.

“Erika Records is a vinyl manufacturing plant based in Buena Park, California. We do everything from picture records, splatter records, two color haze, and your standard black record. If Eric records can’t do it, then no one else can,” said Ma Nerriza dela Cerna, an account manager at Erika Records.

Founder and CEO Liz Dunster shared why making records is special to her. Their list of clients includes Lady Gaga and Childish Gambino, among many others.

“I love vinyl so much that if you cut my veins, PVC will flow out. We’ve done Metallica, we’ve done Guns N Roses. We helped Sublime get started, and Nirvana. We’re doing a lot of Disney soundtracks right now. To me, the novelty record is just so much to look at. There’s something about it that is different. Even the color records. We have like a bubblegum pink. You look at it and it does look like bubblegum and you want to take a little bite out of it,” Dunster said.

Dela Cerna explained the process of making a vinyl record.

“The vinyl is made out of PVC. You’re essentially listening to a needle being scratched over the plastic. It actually starts off with digital files. We transfer those from the computer onto the label where a needle cuts into a lacquer acetate. That piece is then put into forming tanks. Nickel infused into that disk cooled off, then put back into the tank to make a stamper. That stamper is then put on to the press to press the records themselves,” she said.

The team at Erika Records tries not to waste any materials that are used in the record-making process.

“We re-use all excess material off the picture records, plus the regular records. We take out the center of it. Sometimes moisture needs to be put in. So, we put a little bit of the Virgin Vinyl into it. Erika Records is the only pressing plant in the United States that is 100% lead-free,” Dunster explained.

Dunster has been in the record business for decades. She was the first female record plant owner, and her business has lasted 40 years. Erika Records has gone from two presses at its start to 43 now.

“We’re one of two remaining pressing plants in Southern California. She’s fought tooth and nail to be here today, and I’m just super proud of her,” dela Cerna said.

“For the next couple of years, I know I’m busy. But it’s a little tougher too. We’ve had seven containers on the ocean here in Long Beach waiting to bring us our raw material since October or November. It’s the cargo bringing the PVC that is costly. It used to be $3,000 per container. Right now, it’s almost $9,000 for a container. The shortage of the material is disappointing. However, I see the light at the end of the tunnel is getting brighter and brighter,” Dunster said.

Before the vinyl record boom of the last year, Dunster’s business was not very slow, but it has still increased greatly as vinyl sales soar.

“Erika Records was never really slow and struggling for work because we’ve always had a strong base community of independents and other artists who stuck with vinyl and really made a push for it, even though it wasn’t the most popular medium at the time. You start with a seed and it continues to grow until it’s just flourishing, and that’s what we’re experiencing right now. The fact that we started off as a modest, small plant, small clientele, but then word of mouth goes around and vinyl becomes popular again,” dela Cerna said.

Erika Records is fully booked through 2023, but hopes to expand its capacity to take on additional orders. For more on Erika Records, head over to ErikaRecords.com.