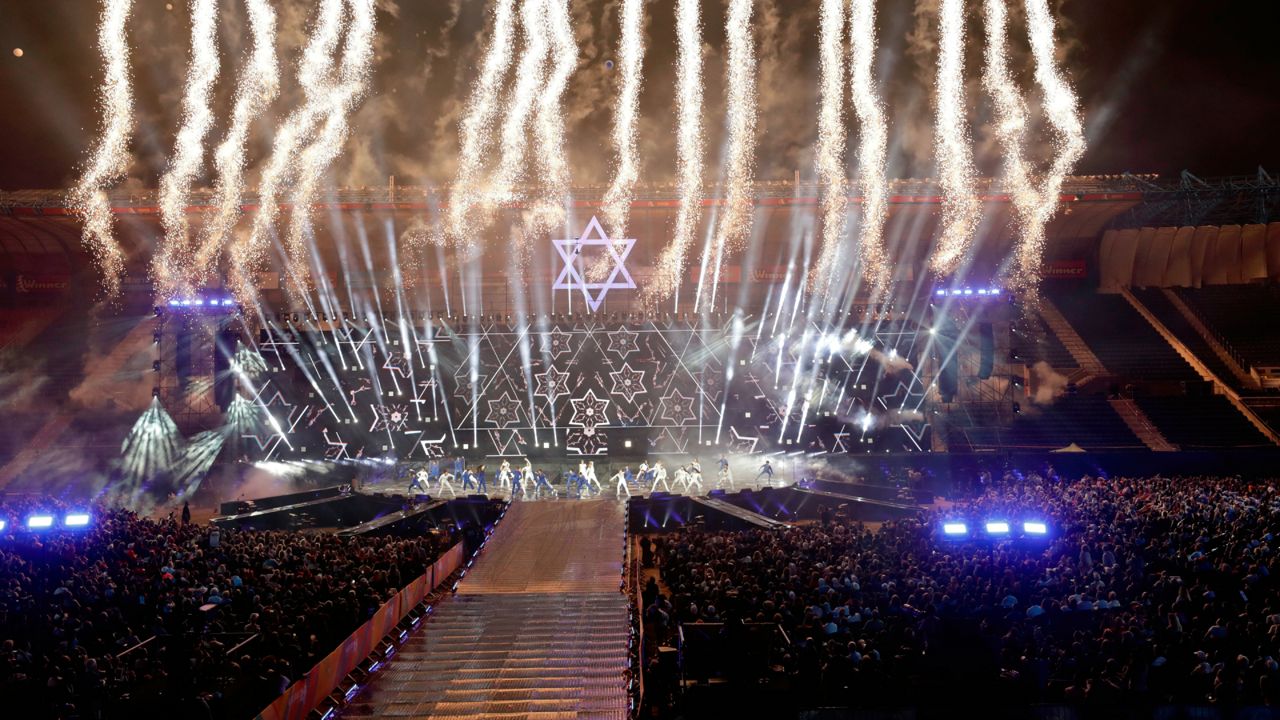 Participants of the 20th Maccabiah Games, known as the “Jewish Olympics,” watch fireworks during the July 6, 2017, opening ceremony in Jerusalem. (AP Photo/Tsafrir Abayov)

The Maccabiah Games, often referred to as the Jewish Olympics, were first held in 1932. The games are held every four years in Israel with approximately 10,000 athletes competing.

This year, for the first time, the Maccabiah Games will include women’s ice hockey. Athlete Chelsea Goldberg is among the women who helped spearhead the sport’s inclusion.

In an interview for LA Times Today, host Kelvin Washington spoke with Chelsea Goldberg about getting women’s hockey into the Maccabiah Games.


Goldberg shared how she got into ice hockey as a child growing up in Southern California, and how her love for the sport grew.

“My hockey love started when my twin brother and I grouped up with some of our guy friends. They all got some rollerblades started playing roller hockey. In the SoCal heat, it started getting up to 118 degrees outside. My brother and I eventually moved to ice hockey. Then a few of our coaches along the way kind of persuaded us and encouraged us to pursue our dreams of taking it to the next level. From that moment on, my brother and I were all in on pursuing college hockey,” Goldberg said.

Goldberg started playing hockey on boys’ teams, then switched to girls’ teams. At age 16, she was scouted by a hockey academy in Vermont and left home to train with her hopes set on a college career.

She currently plays for the Boston Blades. While Goldberg went professional with ice hockey, her brother was picked to be on the junior Maccabiah squad for Team USA. She shared how it felt to see her brother represent their country on the ice while there was no women’s’ team for her to join.

“Currently playing professional hockey and growing up, I always had dreams to represent Team USA on ice. I ended up breaking both of my legs playing. My dreams of playing for Team USA unfortunately did not go as I would have hoped. When my brother was representing Team USA for Maccabiah, I believe in 2013, I was like, ‘Why can’t I play?’ I actually reached out and asked if I could play with the boys. They said, ‘no.’ That kind of lit a fire under me to get a women’s team out there. For the past eight years now, I’ve been working really hard with one of the hockey chairs at Maccabiah to get a women’s team over there and it’s finally happening,” Goldberg said.

Getting a women’s hockey team together and approved for the games was not simple.

“Over the past few years, it’s kind of been a word-of-mouth game. Growing up, I have been one of the few Jewish members of every hockey team that I have been a part of. I remember some of my previous Jewish teammates, so I reached out to them and kind of have thrown the idea out, ‘Hey, if we get a team to represent Team USA at the Maccabiah Games, would you be interested?’ A lot of word of mouth reaching out to previous teammates that I know were Jewish. I started this spreadsheet and I think it is about 80 athletes now on the Jewish side. It has just been a lot of plugging away, word of mouth, getting to know other Jewish female hockey players out there and seeing who would be interested. Coming together the chair of Maccabiah hockey and then another fellow player, Jodie Barrett, that helped spearhead this project with me,” she shared.

Playing in the game would cost each team member $8,500. Goldberg explained how the team is raising funds to get them to Israel to compete.

“It’s definitely a big financial commitment. Each player who has been committed to the team or appointed to the team has started their own fundraising page through Maccabiah so they can get individual support. We also have a few different major sponsors that are allowing the men and women’s ice hockey to head over to Israel in July. It’s a lot of individual group sponsorships, but we’re always looking for support,” Goldberg said.

Seeing this team come together after years of fighting for it has been a great experience for Goldberg. She talked about how it feels to know that women’s teams from the United States, Canada and Israel will take to the ice in July.

“I don’t know if it’s sunk in yet, but it’s an incredible feeling knowing that we’ve made this happen and we’ve turned our dream into a reality. Obviously, watching my twin brother compete at two of the Maccabiah Games, and I have been fighting throughout those years to make this happen. For it to finally come true, it is such a blessing, such an honor, to represent Team USA in one of the biggest stages in sports. Especially as a Jewish athlete being able to head over to Israel, it will be my first time, so it is just amazing overall. I’m so excited to be part of this inaugural team,” she said.

The 21st Maccabiah Games will be held this summer in Haifa, Jerusalem, Netanya and Tel Aviv.