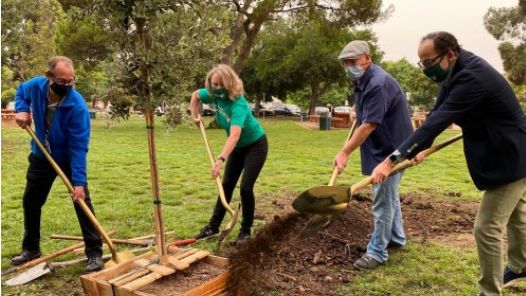 How micro forests can combat climate change in LA

California’s latest climate assessment projects that heat waves will become more intense, last longer and will happen more frequently in the years ahead.

From 1980 to 2000, there were an average of six annual extreme heat days in Los Angeles. By 2050, that number is predicted to increase to 22 days. This is just one of the many reasons the LA Parks Foundation recently launched the Park Forest Initiative.


It is aimed at installing micro forests throughout Los Angeles to combat the urban heat island effect, close the climate gap, and grow our urban canopy.

“We have a large exercise area inside Harbor Regional Park. We would like to bring shade to the people using the equipment. Also, there are walkways that go through. We like to shade the walkways. That’s really important,” Boroditsky said.

Carolyn Ramsay, the executive director of the LA Parks Foundation, talked about the long-term goals the organization has for the micro forest program.

“We’ve installed eight forests in the first year and our goal is to plant 10 forests a year for the next 10 years. We actually stole the idea from Paris. They launched a micro forest initiative a few years ago, and I read about it and instantly vacuumed up all the information I could get on it. Then, we created and adapted our LA Park Forest Initiative to LA city parks,” Ramsay said.

Climate change was the key motivator for the initiative.

“The serious problem that we are trying to address was the urban heat island effect. Mayor Garcetti had created this heat map of Los Angeles, and the most urbanized areas were just so much hotter than other parts of the city. For example, in Hollenbeck, we planted 20 trees. We’re planting large trees. They’re between eight and 12 feet tall, so there is an instant shade impact. We’re not going to install trees that aren’t going to thrive for the next 50 years. That’s why we’re maintaining them for the first two years and until they’re established. We’re planting trees that are ready for warmer weather,” she continued.

“The stressors on trees are getting greater. I would ideally like to be able to have a tree that can live here right now, and also live in Phoenix or in Baja. If it’s got that ability to be adaptable and both range, I’m a little more confident of planting it,” Boroditsky said.

Ramsay detailed how her organization works with the city to run the program.

“We work extremely closely with the Department of Recreation and Parks in Los Angeles. They developed a list for us of the parks and needed trees the most. Then we sit down with donors who are interested in this initiative and go through all the parks where trees are needed,” she explained.

Sandra Pineda, a recreation coordinator with Hollenbeck Recreation Center, said she loves seeing how the initiative to plant trees will benefit generations to come.

“I look at pictures and I see like the little kids and I’m just like, ‘Wow, these trees are going to grow with them, you know?’ It’s just amazing to know that we were able to provide that to our kids. Within the five years that I’ve been here, LA Parks Foundation has proven itself to continuously support the community in a quick manner. When they say they’re going to put [trees] in, it’s a couple of months to get the paperwork done and get the approvals and it comes in. It is nice to see that we have that connection with the LA Parks Foundation,” Pineda said.

“I like to say the act of planting a tree is to send future generations a love letter. It’s my hope that when I plant history, that it’ll be around in 75 years,” Boroditsky shared.

Ramsay said the program has gotten a lot of positive feedback.

For updates on upcoming installations and to learn how you could help with the next one visit: LAParksFoundation.org.