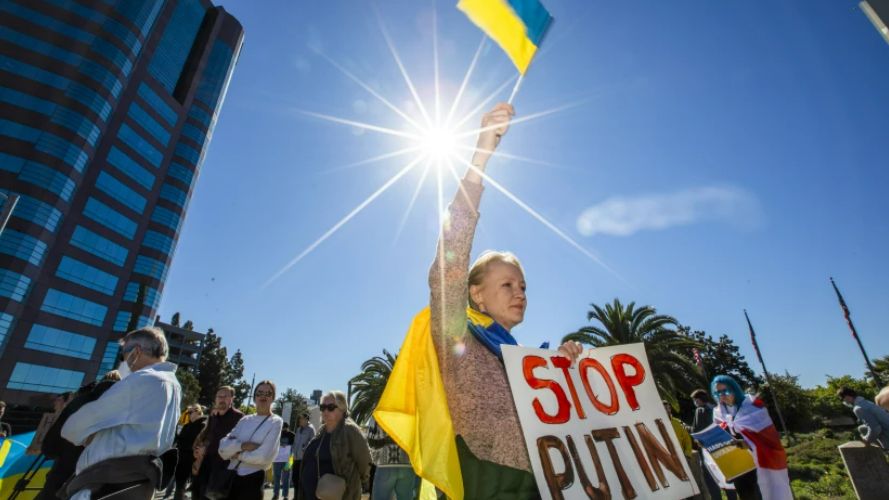 Russia’s invasion of Ukraine destabilized the nation, causing hundreds of thousands of Ukrainians to flee and creating a humanitarian crisis. Closer to home, members of California’s Ukrainian diaspora are facing different challenges: how to get loved ones out of harm’s way and how to help while being so far away.

The Ukrainian community is not as large in California as it is in other parts of the United States, particularly the East Coast, or Chicago. However, Parvini said, the community is not small, and it is well-connected.

“According to census estimates, there are roughly 112,000 or so folks of Ukrainian descent who live in California. You’ve got a cluster here in Los Angeles, and in San Diego, but also a good amount as well in Northern California, clustered in the Bay Area and Sacramento,” Parvini said.

Parvini explained that the Ukrainian community was stunned by Russia’s invasion, but not entirely surprised, since there have been tensions with Russia for years.

“For a lot of folks in the community, the conflict didn’t stop in 2014 when Russia annexed Crimea. And so for them, it’s been eight years of conflict, even if it hasn’t been outright war. So, this sort of seems like the next escalation where they hoped that this would not happen. But at the same time, they’re not exactly surprised,” she explained.

Parvini spent time at a Ukrainian church in Echo Park to better understand how the community is dealing with the plight of their country.

“It was a lot busier than it normally would be during a Sunday service. The parking lot was pretty packed. According to parishioners, it was not what it normally is like on a Sunday morning there. There were a lot of people who were visibly emotional because of what has been happening over the course of the last week or so. Some were wiping tears in the pews as they were praying. Others were sort of solitary, but definitely an emotionally charged place on a Sunday morning,” she said.

The war in Ukraine could be a turning point for the diaspora to band together and become more politically active to help their country. Parvini said the community is grappling with whether to continue using cultural centers to educate generations, or to push for change. There are questions about how they can help from so far away.

“A lot of people have been donating to various organizations that they have found on their own or through community centers or churches to figure out where they should be spending their money. There’s also a lot of protesting that has been happening over the last few days. A lot of people see that as a way that they can contribute to this cause to raise awareness about what is going on, and to make political demands, even from 6,000 miles away from where the violence happened,” Parvini said.

The primary tool of the West against Russia has been sanctions. Parvini spoke to Ukrainians about whether they think sanctions are doing enough to stop the violence.

“I think it depends on who you ask. But you know, the folks that I have spoken with said it’s nice that there are sanctions coming from the West towards Russia that will, in their eyes, be crippling in some sort of way. But there is also a sense of, and I’m paraphrasing the Ukrainian president, saying that what they need is ammunition. They need some sort of material support in addition to the sanctions that would help curb this aggression,” she explained.

So far, the sanctions have had a major impact on Russia’s economy, but the fighting rages on.