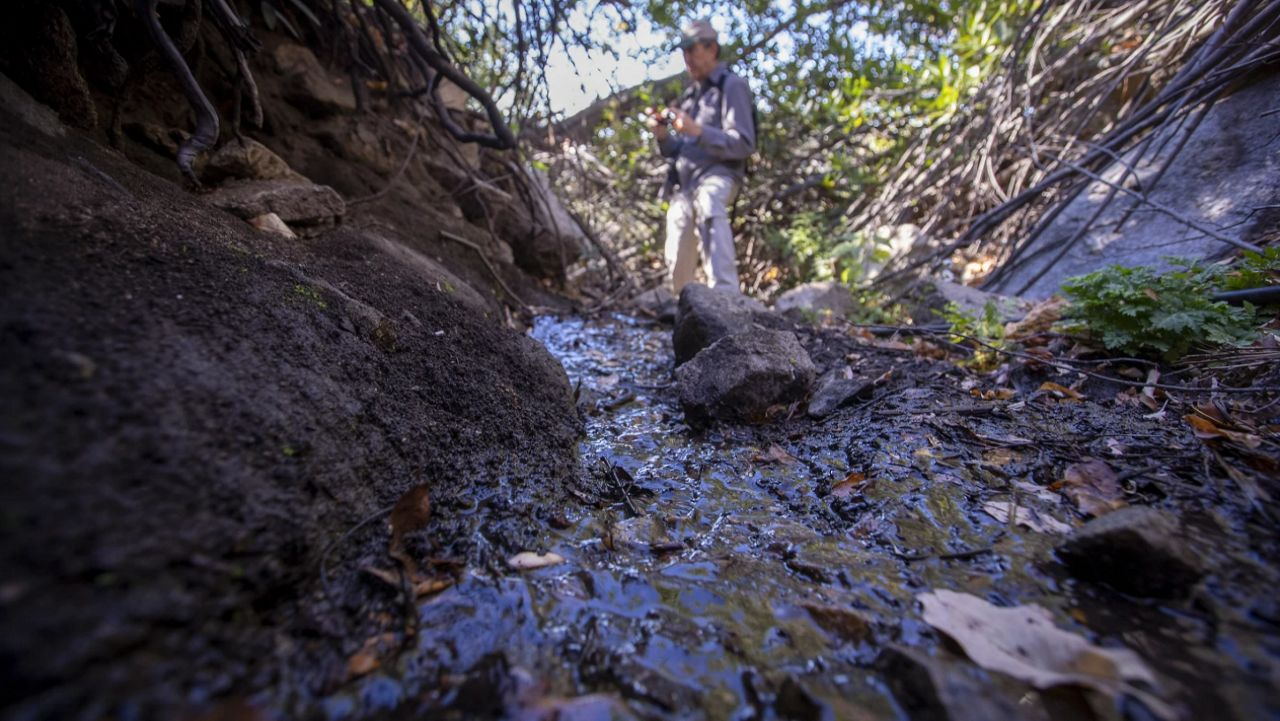 The fight over the source of Arrowhead bottled water

In 2015, a Desert Sun investigation revealed that Nestlé was piping spring water from the San Bernadino National Forest to sell as Arrowhead brand bottled water. The newspaper found the company was using a permit with an expiration date in 1988, a permit the Forest Service hadn't reviewed in many years.

The water was free to the company for years, while California went through drought after drought. Today, a new company owns Arrowhead, and the water is still free.


Ian James was the reporter at the Desert Sun who broke this story some seven years ago. He shared some of the history of the issue.

"Water from Arrowhead Springs has been bottled and sold for more than a century. It started near the old Arrowhead Springs Hotel in the San Bernardino Mountains. Today it's a system of boreholes and water collection tunnels high in the San Bernardino mountains that collect spring water that would be flowing into Strawberry Creek, but is instead channeled into this steel pipeline that flows down the mountainside," James explained.

James and LA Times photographer Allen Schaben hiked the along the spring to see what was happening with the water.

"It's high up in the mountains. You get these amazing views of the San Bernardino Valley and the mountains below. In that area, you see water trickling out of springs. But in a lot of the areas where the springs would be, there are these spring boxes and collection tunnels. This network of pipelines starts there, runs down the mountains for about four miles until it gets to a tank at the roadside," James said.

Californians who have been asked to cut down on their water usage during droughts have questioned why a company can profit off the water on forestlands. Some activists James spoke to said that the amount of water being siphoned out of national forest has not changed or it has not been cut back, even during drought emergencies.

"The company, which has changed hands a few times over the years, has a permit to operate its pipelines and water collection tunnels in the national forest. That is overseen by the U.S. Forest Service. They pay a permit fee of $1,950 a year to maintain this network of water collection pipelines. They are not charged for the water. The way the federal government sees it, water rights are a state matter. It's up to the state to determine who has water rights and who doesn't," James explained.

"After this controversy erupted in 2015 with the publication of the Desert Sun's investigation, the Forest Service looked at the permit, which had an expiration date in 1988, and began a process of reviewing it and issuing a new permit with certain conditions. But that permit is still in place," he said.

There were several complaints to California's State Water Board of people questioning if the company has rights to all the water. State water board investigators found it appears the company does not have valid rights to much of the water it has been taking. The board issued a draft order last year, and now the company is fighting it.

Critics say the water companies overdrew from their water sources. They also question whether Nestlé, the original owner of Arrowhead Water, had the right when they sold the company to transfer those water rights at all.

"It's complicated. Nestlé was sold to Blue Triton Brands, the bottled water company. So, they do question whether that permit should be transferred to the new company," James said. "As for the water rights, what the state investigators have looked at is a 1909 contract to bottle a certain amount of water from Arrowhead Springs. They say that since the 1940s, the various companies that have run this operation have been taking more than that amount. And so that's what the disagreement is about. ... In this series of virtual hearings, they are arguing about that and ultimately later this year, probably the state water board will decide."

Public outcry has been fierce against the water bottling company's presence.

"There was a petition several years ago that opponents of the bottled water operation collected many, many signatures calling for the state to stop the water extraction from the San Bernardino mountains," James said. "There also was a lawsuit by environmentalists who questioned the permit, which later on was reissued. There were even some protests, with people holding signs up in the San Bernardino mountains. I think during the drought, as people see that water supplies are especially tight, it's added to the controversy and the outrage for some people who question why this is going on."

CORRECTION: An earlier version of this story incorrectly stated that Arrowhead Water Company was illegally bottling and profiting from a Southern California spring in the San Bernardino Mountains. This has been corrected. (Feb. 11, 2022)