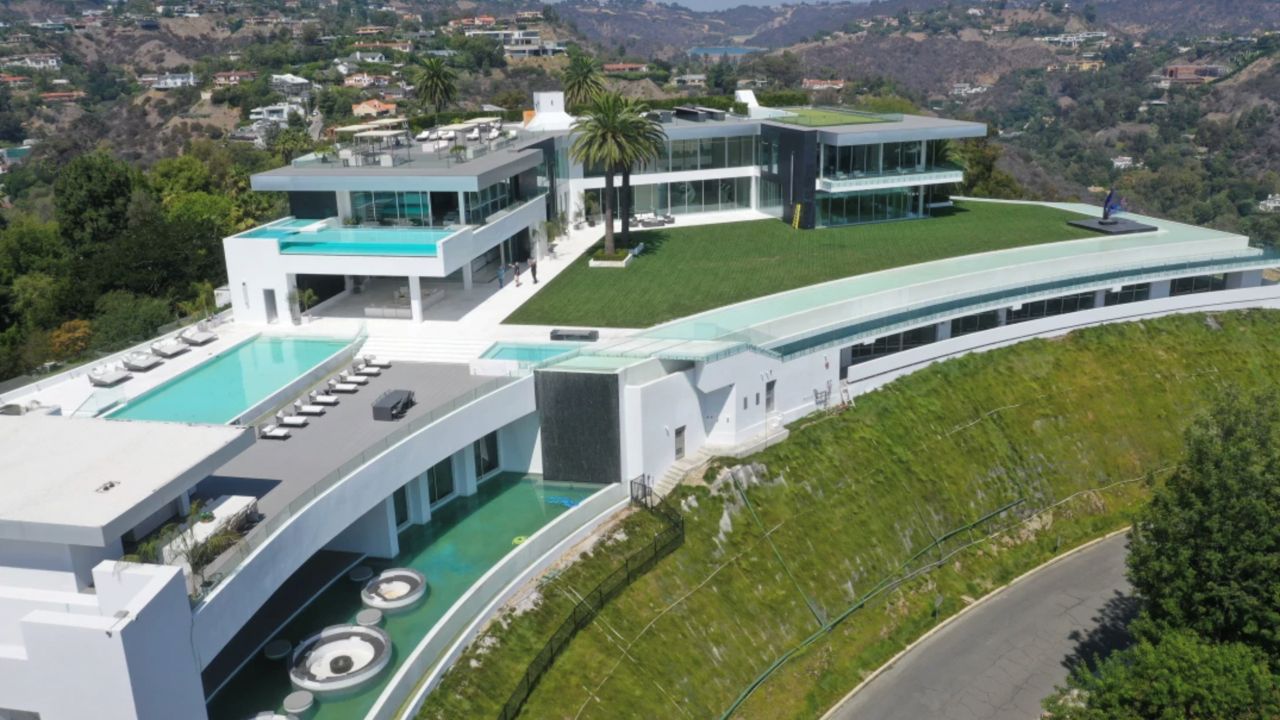 The battle over Nile Niami’s mansion 'The One'

For years, real estate developer Nile Niami has teased "The One" — a 105,000-square-foot mansion in Bel Air — which he hoped to one-day sell for $500 million. Those plans, however, are now in peril.


Staff writer Laurence Darmiento has been trying to untangle the story of the largest mansion in LA and joined LA Times Today host Lisa McRee to talk about it.

"The One" is considered the biggest modern home in the country.

"The only thing larger with two homes built over 100 years ago is the Biltmore mansion in North Carolina. You are talking about a large house, and you have a huge fight because, at one point, that house was being marketed for $500 million. When there's that much money flying around, the lawyers are going to get involved," Darmiento said.

Darmiento has visited the extravagant mansion; he says it has many features.

"There is a multiplex-sized movie theater in that house," Darmiento added. "There is a four-lane bowling alley. There are seven pools and water features. There is a 50-car garage with two carousels to display exotic cars. There is a 4,000 square-foot guesthouse. There's a running track, and I could go on and on and on."

Nile Niami has been in the business of developing these mega-mansions, but Darmiento said he is in trouble with this one.

"Niami is an interesting guy, started out just developing some ramshackle homes after the Northridge earthquake, and got into condos, but was wiped out in the financial crisis," Darmiento said. "He got into big homes and became very successful. I mean, he sold a $40 million home to P Diddy, with an underwater tunnel in it. He's just had a succession of very exotic homes, a lot of marble and glass and concrete that has sold for tens of millions of dollars. 'The One' was going to be the culmination of what he's been doing. He spent 10 years doing it, and he has gotten into financial trouble. It cost a lot of money to build a home that size. He ran out of money and had to go to a guy named Don Hankey. Don Hankey is one of LA's less-known billionaires. He is worth some $6 billion. He made his money on subprime loans, and he is a hardcore guy. If you borrow money for a car from Don Hankey and have bad credit and you are one day late, his minions will call you. Nile had to go to Don, and he borrowed $82.5 million about three years ago. Then he had to go back and borrow some more. At the same time, he was borrowing from somebody else, a long-time investor of Niles Properties. When everything sort of came due, over the past year, the house was not ready, and Niles didn't have the money to pay it back."

Now, the two lenders want to take control of the house, and they want their money back.

"Don now says Nile ended up borrowing $106 million from Don. He borrowed $30 million for this house from Joe. And so, when Nile couldn't pay, Don filed a notice of foreclosure and also filed for foreclosure lawsuit and set a trustee sale, which is like a court auction for July," Darmiento said. "Well, they all agreed that they would delay the trustee sale, try to finish the house, and then sell it on the open market. Just this month, they got approval for two very high-end brokers to list the house, not for $500, but for $225 million. Well, that all sounded like it would be pretty good until Don Hankey decided he wanted to go ahead with a foreclosure sale. ... The bottom line is if Don Hankey followed the foreclosure lawsuit and was successful, he would get the initial proceeds from any sale. So, if the home sold for $120 million, which some people say he's going to say he's owed, he would get all the money, and nobody else would get any money whatsoever unless it sold for more. Joe Englanoff filed a lawsuit and said this could not be done. There was a hearing last week in which a judge decided to delay the trustee sale for next week and to allow both lenders who are fighting it out to try to agree, but I received an email from Don, and he said he's already tried to work out an agreement on this thing. He said that this trustee sale is an opportunity for people to buy an amazing house. And it looks like he wants to go ahead with it."

The lenders came up with an agreement to not let the mansion go through a trustee sale but to let realtors sell it, and real estate experts have different thoughts on how much the home is worth.

"We talked to some people. We have heard rumors and speculation. I mean, we have heard something like the house is only worth $125 million, but you never know because there's a lot of jealousy involved in the real estate world," Darmiento said. "It certainly can go for less than $200 million. The receiver, who has been charged by the court with completing the house, there's like $5 million of projects that need to be completed. He said the total debt is about $165 (million). So basically, in order to pay off all the debt holders, you've got to get $165 (million) before Nile Niami and his ex-wife Yvonne, who established the holding company that actually owns the house, didn't get a penny."