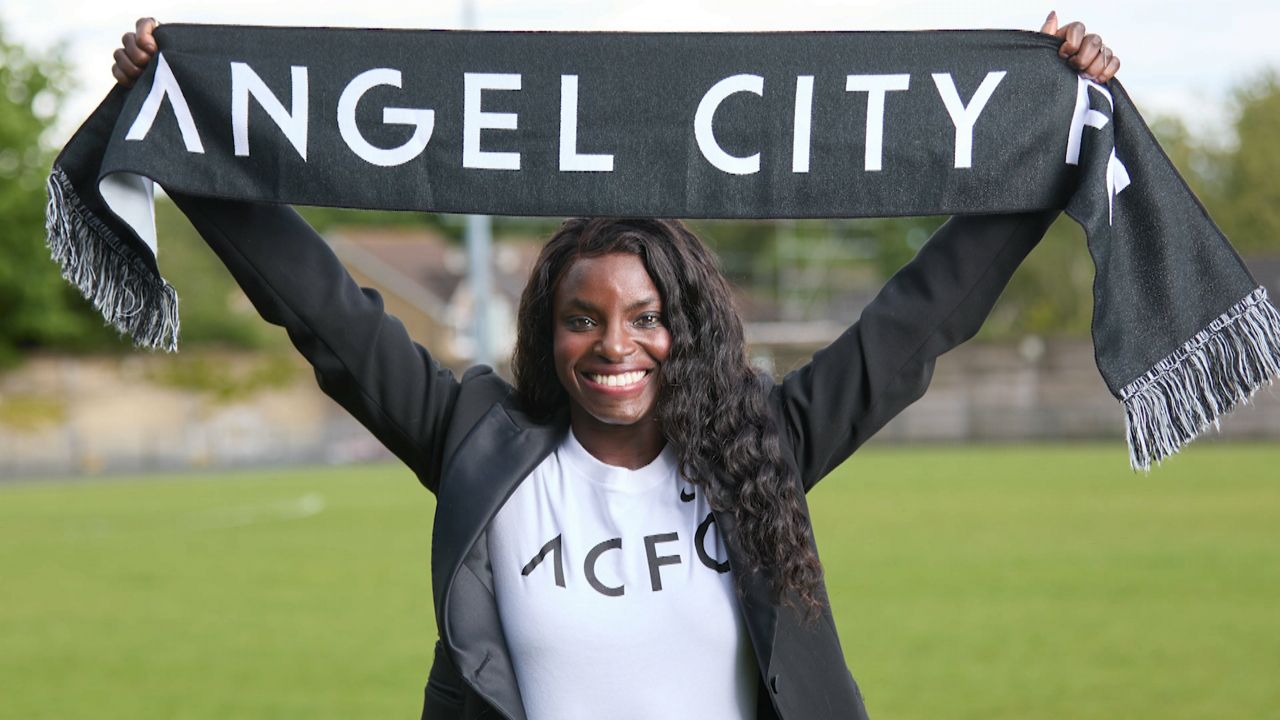 After a 12-year break, women's professional soccer is coming back to Southern California.

While Angel City FC is still a year away from its first game, big plans are in the making for the franchise — starting with their first hire, former English international player Eniola Aluko.

In an interview for "LA Times Today," Aluko joined host Lisa McRee from England to share her plans as Angel City's sporting director.


Angel City FC is the largest female-led team in pro sports, and Aluko says this is important for the future of women's soccer.

"I think it's an opportunity for the sport to be shaped from a different perspective, the sport to be shaped from a different lens," she said. "For so long, soccer has been sort of managed the same way. And there are so many traditions that have brought the sport to where it is. But I think there's a lot more progression and innovation and opportunity that can be applied to women that is so much more important that can be done from a female perspective. So Angel City, being a female, founded [by] a female and majority female-owned club, it gives us the opportunity to rewind the rules a little bit, to reshape things a little bit for players, the staff, the fans in a way that really changes the way football is done, celebrated and played. And hopefully, it becomes a sort of a beacon and a marker for the other women's sports teams around the world."

Many female soccer stars have been vocal about the disparities in training facilities and compensation. But Aluko said it's a global problem.

"Women's football was banned for 50 years here in the U.K.," she said. "So we're always playing catchup to men's football, which has been around since the 1800s. So everything feels like we're still playing catchup. But what that means is that the conversation around equality is challenging because you're really comparing all the time to the men's game. I think what we have now is an opportunity to stop comparing maybe and shape the game how we feel women's football should be shaped. So that's where I think we've got an amazing opportunity with Angel City to really do it in a way that has never been done before."

When it comes to the members of Angel City FC, Aluko also wants the players to be reflective of the communities they play for.

"For me, soccer is a global language, and it's a universal sport that brings people together in ways that nothing else can. And I think what struck me about Angel City when I first started talking to the organization and Julie Uhrman, the CEO, was that the community is first. And so that would be wrong of me not to bring that in fundamentally into the football culture, so really building a football team where the community is seen. So I want to bring in players who are familiar with LA...I want to bring in international players who reflect the community. I want to create a team that globally will be celebrated and watched. So I want there to be diversity, inclusion, unity, and we've got to have fun. Football is a fun sport, and we want to create a team that is exciting to watch, that is unpredictable, and creates a sense of winning that players really feel a sense of."


Aluko will be managing the team day-by-day and is also responsible for hiring the first coach.

"So, beyond sort of how the scale and the ownership and how the world is really excited about this organization, my job is to create a good football team that wins. It is important that a coach understands the league, a coach that understands how to bring the best out of players, and how to create a very strong culture within the dressing room, a coach that is tactically unpredictable and has a tactical understanding of the game. That's what I want to see. So there's a sort of soccer focus first, and then obviously someone who has the personality and the leadership skills to be able to come into this big organization and build the culture along with the rest of the team and me."

An inside look at why Angel City hired Eniola Aluko to build its team.@kbaxter11 spoke with new @weareangelcity leaders and new technical director @EniAlu about her hire, how she will approaching selecting a coach and more:https://t.co/i63IUEgA5I pic.twitter.com/09VpBUmbai