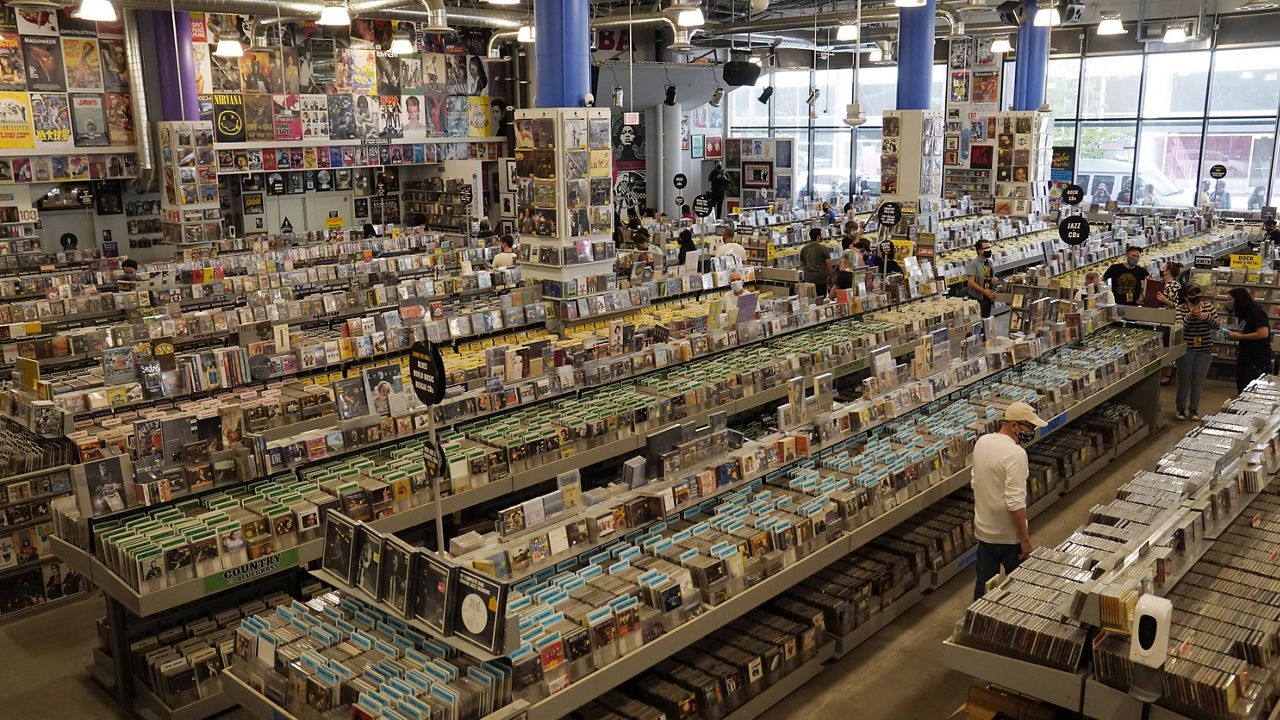 In this April 1, 2021, file photo, a shopper wanders down an aisle on the re-opening day of the independent record store Amoeba Music Hollywood's new location on Hollywood Blvd. in Los Angeles. The original store's iconic Sunset Blvd. address closed last April due to the coronavirus pandemic. (AP Photo/Chris Pizzello)

Known for its overwhelming selection of vinyl, Hollywood's iconic used record store, Amoeba Music, is one of LA's most beloved attractions for music fans. But when the pandemic hit, it was forced to close its doors at its famous Sunset location.

After a yearlong hiatus, Amoeba Music is back.


The owners of Amoeba Music have made changes that better reflect what they feel a record store should look like in 2021.

"It is a little bit of embracing familiarity of the past and the freshness of the new space. The more you walk around it, the extra steps will tell you it is as big as the other space," said the co-owner of Amoeba Music, Jim Henderson.

Even though many parts of the new space resemble the Sunset location, the owners also added some different touches to the new store.

"We added a lot more brightness into the store. We have rainbow-colored columns that help brighten up space and serve as a landmark for helping direct people to different sections. And, we have this fantastic Shepard Fairey mural he painted for Amoeba very graciously. There is just a lot more color and brightness, embracing the vertical more in this store," Henderson added.

"Where people were more positive and responsive at the old space, we tried to give more space to our larger T-shirt section, which is right up front and center. We have a larger book selection, which has its own room. Bringing things like all the vinyl close to one another, I think, will help more people discover new music. It is kind of leap from like-minded genres to one another rather than having to traverse the whole store looking for different sections," Henderson said.

Customer Diego Mora was at Amoeba's opening day and said he looks forward to visiting the store more often.

"Everybody knows Amoeba; it is a big record store known around the world. What more can you ask for having it so close to home? For my friends and me, Amoeba is something cool. Seeing how everything shut down for a year, we did not get to visit and have that fun experience. But being able to come on opening day is something that is going to get stuck in history, and it is something we enjoy," Mora said.

Regarding future events and concerts at Amoeba, the owners say they are taking things slow and are happy to see customers again.

"We are happy we can interact with staff back in the new space, and seeing familiar faces and being around everyone again has been really heartening. So finishing that process and getting the customers here will be a real milestone for us," Henderson added.

Amoeba Music is now open on the corner of Hollywood Boulevard and Argyle Avenue. For more information, visit amoeba.com.