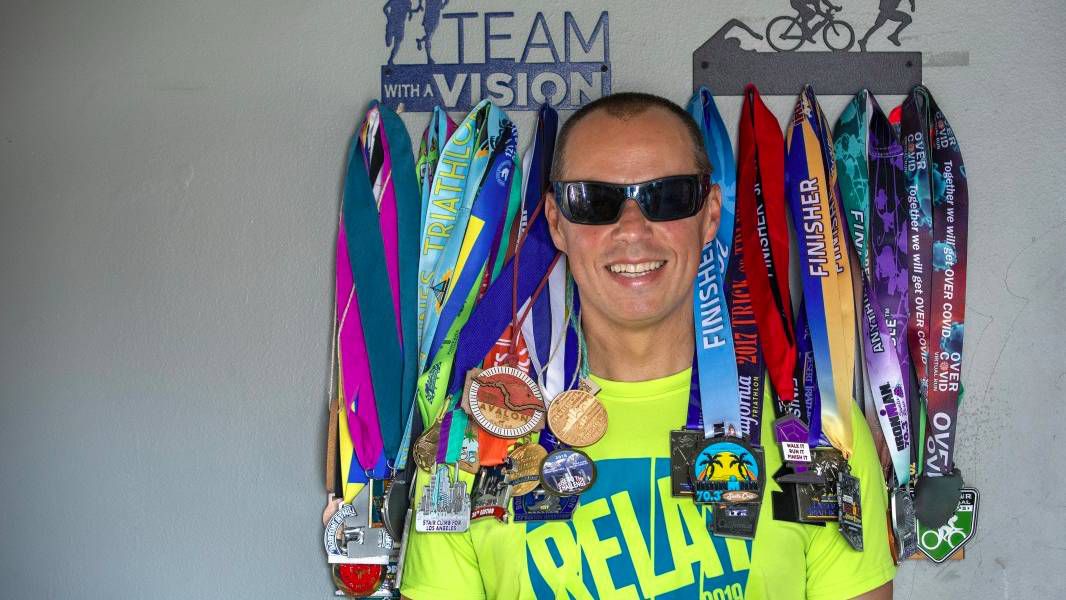 Tony Duenas suddenly lost his eyesight because of a detached retina, but he's defying all the odds.

How Tony Duenas Is Defying the Odds After Losing His Eyesight

In 2009, Tony Duenas suddenly lost his eyesight because of a detached retina. Life instantly changed for the 53-year-old Angeleno, but with the help of friends, he got into fitness, long-distance running, and competing in triathlons.

Before losing his vision, Duenas had an everyday life.

“He was born in Mexico but moved to Los Angeles when he was 10-years-old. He went to Cal State Los Angeles and worked at American Express. He was not a huge athlete before; he was a little overweight, had some high blood pressure problems and other health issues. Like many people, he figured one day he would get back in shape and go to the gym, but it was not that urgent. He was content where he was in life and with how things were going, and then a sudden change came out of nowhere,” said Harris.

One day Duenas woke up and did not have sight in one eye.

“He did not know what to think at first. He thought it was maybe the gunk you get in your eye when you sleep, then he went to the hospital, and the doctors found out that his retina in that eye had detached and the other one was about to detach—which it did. It left him completely blind. They tried surgery to fix it, but all that really gave him was faint, vague light sensitivity in one eye, so he can sort of make out shadows, but he said even that has dissipated over the years,” added Harris.

Duenas admitted that being blind has been a scary experience, and he said he did not want to be a burden to his friends and family. He tried to figure out how to be as self-sufficient as he could.

“He mapped out — to the step — every walk around his apartment to know where the grocery store was, how to find the bus stop, how to get around town when he still needed to,” said Harris.

After Duenas lost his sight, he also committed to getting into better shape.

“He started taking boxing classes, jiu-jitsu lessons, and cross-fit training in these controlled environments. Duenas really had to reimagine a new way to live but was able to do it, which on its own is pretty amazing, even before he got into the marathon running and some of the other things, he picked up this time on,” added Harris.

In 2014, Duenas was walking to a bus stop when a random jogger on the street stopped him unexpectedly and asked him if he ran. That encounter changed his life.

“The man named Ray Alcantar had previously been a sighted guide for another originally impaired runner who had since retired from the activity. He was not really looking for a running partner, but it was one of those things where he saw this guy who was blind but looked to be in good shape and decided to ask. For people who are not familiar with what is sighted guide, when it comes to running, for provisionally impaired people, it is a popular activity because of people sighted guides. They run side by side and the only thing keeping them connected is a foot-long nylon tether. The sighted guide calls out obstacles in their paths, but other than that, somebody like Tony Duenas is running on his own. The first time they went running, Tony started crying because he says this is the first time he felt like he was doing something that he could not do before on his own. In some ways, losing his sight opened all these other opportunities he never expected,” said Harris.

Tony Duenas went blind when he was 42 years old. That's when a second life dedicated to endurance athletics began

How, with the help of sighted guides, running has kept him moving forward, especially through the pandemic, on @latimes:https://t.co/tRVOiCSheu