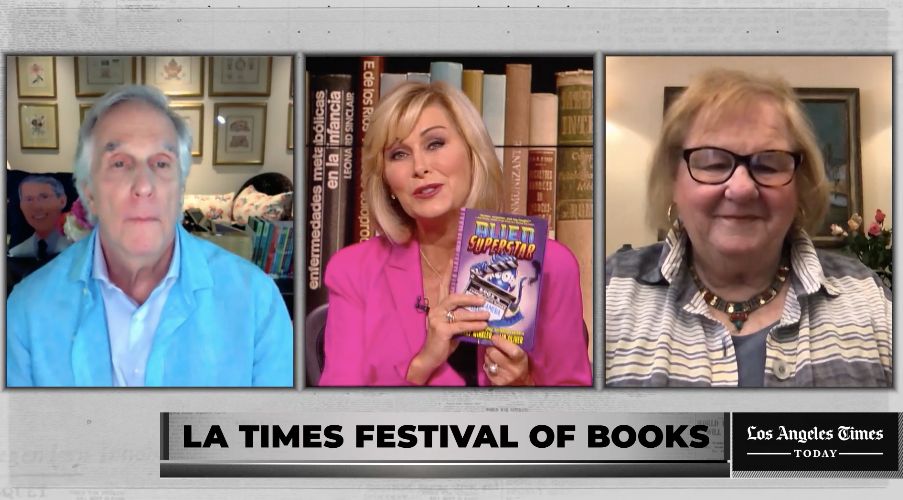 As part of the 25th anniversary of the L.A. Times Festival of Books, the Times has scheduled bestselling authors to talk about everything from food to politics to aliens crash landing on the Universal Studios lot. Yes, kids are invited to the virtual festival too. And, we were lucky to have Henry Winkler and Lin Oliver share their fun, new book with us.

Their latest book is titled “Lights, Camera, Danger!” (Alien Superstar #2). It features the character Buddy Burger who escaped from his oppressive red dwarf planet and landed at the Universal Studios lot, starred in his own sitcom, and became a celebrity. In this new book, Buddy is being pursued by a body snatcher from his planet because their government cannot have people escaping and getting away with it.

Winkler and Oliver came up with the idea of the book by combining their professional experiences.

“We know that children love aliens and the idea of celebrity — from limousines to parties, and paparazzi. So we took a fish out of water — a stranger in a strange land — like anybody is when they come to Hollywood. All of our characters are looking in, trying to get on the inside,” Winkler said.

The book focuses on various themes that can be meaningful for children.

“Our first and most important theme is that it’s important to laugh. Everything that Henry and I write together for kids is a comedy and design to lighten their load and make them laugh. But, underneath the comedy, there are underpinnings of really important themes. One is that you can’t judge a book by its cover. Our alien looks alien on the outside, but on the inside, he’s as human as the rest of us. And also the themes of accepting people for their differences. We’re great believers in the beauty of differences and teaching kids not to judge people who are different but to love them for their differences,” Oliver said.

Winkler said he tested out the book with a particular audience — his grandchildren.

“This past weekend, I babysat my three grandsons. I read Alien Superstar, and when you get a laugh from your grandsons and family, and it comes naturally, it is one of the great compliments of our time,” Winkler said.

Oliver and Winkler will be appearing at 10:30 a.m at the L.A. Times Festival of Books on October 18.

“We have been great supporters of the L.A. Times Festival of Books for many years. We’ve appeared, and I’ve also attended as a parent and grandmother. So, we’re looking forward to taking that experience and making it as personal as we can over the screen. I’m a Los Angeles native, I was born and raised here, and I love our book community. I think it’s going to be great to be in touch with as many people as we can be and talk about our work for kids,” Oliver said.

To register for the L.A. Times Festival of Books, visit latimes.com/festivalofbooks.