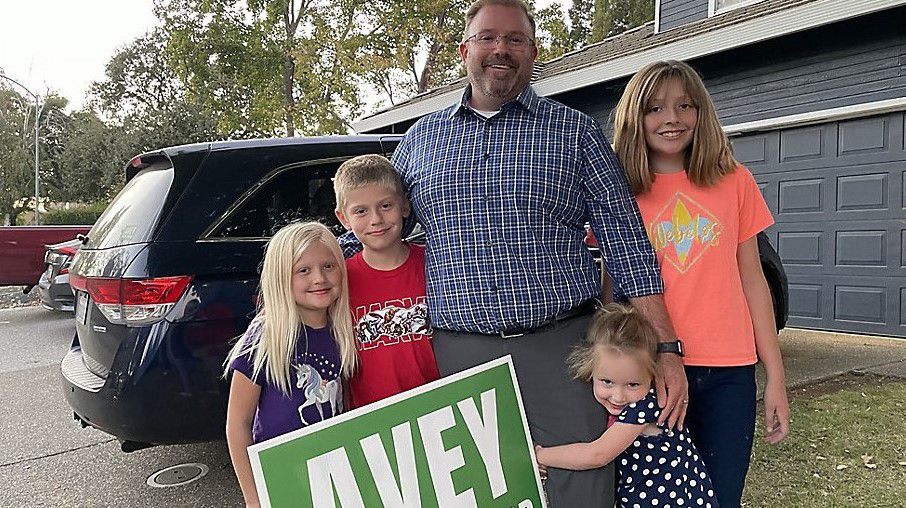 Parenting to Politics: California parents campaign for school board

SACRAMENTO, Calif. — Before the pandemic, Ben Avey, a father of four, was a lot like other parents.

He admits he didn’t pay close attention to school board meetings, assuming that the people in charge were thinking in the best interest of everyone’s kids.

Avey works as the director of a nonprofit in Sacramento, and he, along with his wife, had to juggle all his kids’ different after-school activities. He didn’t have time to go to school board meetings that could last for hours.

It was only during the pandemic, when Avey watched the meetings online. He found it convenient to have the meetings on in the background while making dinner or doing other chores.

A point of contention Avey focused on was the school shutdowns. In the beginning, he shares he supported the shutdowns, but once vaccines became widely available, as well as more access to PPE and testing, the school board should have made plans for reopening.

“We hit a point in the shutdowns where it didn’t feel as necessary. And so I asked the school board, along with other parents, to just put COVID on the agenda. Because of state law, they’re only allowed to discuss things at school board meetings if it’s on the agenda,” Avey said.

Avey adds the board shut down every time a parent asked to put the discussion of reopening and COVID on the agenda. Having grown frustrated by the constant rejection, Avey formed the San Juan Parents Association to help families advocate for their children.

“We pressed, and we pressed and we pressed, then eventually they reopened the schools, at least part-time, but we saw it as a victory. And we kept pushing to bring back school sports and dances and events. We were cognizant of what we needed to do, for it to be safe, but also recognizing they could do more than they were doing,” Avey said.

Avey said during that time it seemed the board didn’t want to hear from parents and even forming an advocacy group was not going to go far enough.

That is when Avey decided the only way to create meaningful change was to run for a school board position. He is running for the San Juan Unified School District Board of Trustees District 6 position.

This election cycle has seen several parents running for school board positions across California.

The combination of parents being able to see their kids’ online learning and being able to attend school board meetings virtually made the issues more tangible.

“Parents got more information about what was happening in the classroom and the boardroom, and that piqued their interest. Because they were happy and wanted to participate and be a part of something positive. Or because they disliked what was going on and they wanted to be part of change,” Flint said.

Flint cautions much like any time someone is starting a completely new position, there is a learning curve that organizations like CSBA need to address.

“You have a lot more people who are engaging politically with schools for the first time. That’s an overall good, but it does present challenges because people are not always familiar with the school board role, what the school board members can and can’t do,” Flint says.

But more parents being involved isn’t the only thing that’s changed with the school board races. They have also become bigger, more expensive, and more politicized.

“What we’ve seen now is that schools have been adopted as the new front in these never-ending cultural-political wars that we have going on,” Flint said. “We’re seeing more formal organization of candidates, recruitment, training, providing them with talking points, coming down from higher up. Even in terms of the state political parties, in some cases.”

The California GOP launched Parent Revolt, a program specialized in recruiting and training candidates to run for education elected positions.

School board positions are classified as nonpartisan positions, but Flint says that’s never fully been true, as it’s fair to say everyone who runs for an elected position has political ideology.

"But, in the past, people did a better job of putting those partisan issues aside and trying to focus on student-centered policies,” Flint explained.

Avey is a registered Independent. He left the Republican Party after the Jan. 6 insurrection and said he prefers to keep political ideology out of his campaign.

Because school board races are becoming higher-profile, that has also made them more expensive. Avey said this development makes it harder for parents to get involved.

For example, in the San Juan School district races, the San Juan Teachers Association has donated over $50,000 in total to their four endorsed candidates according to transaction data from the Sacramento County website.

Avey notes he’s raised close to $15,000 since he launched his campaign, which is the most by a candidate that’s not backed by a union in the San Juan Unified School District race.