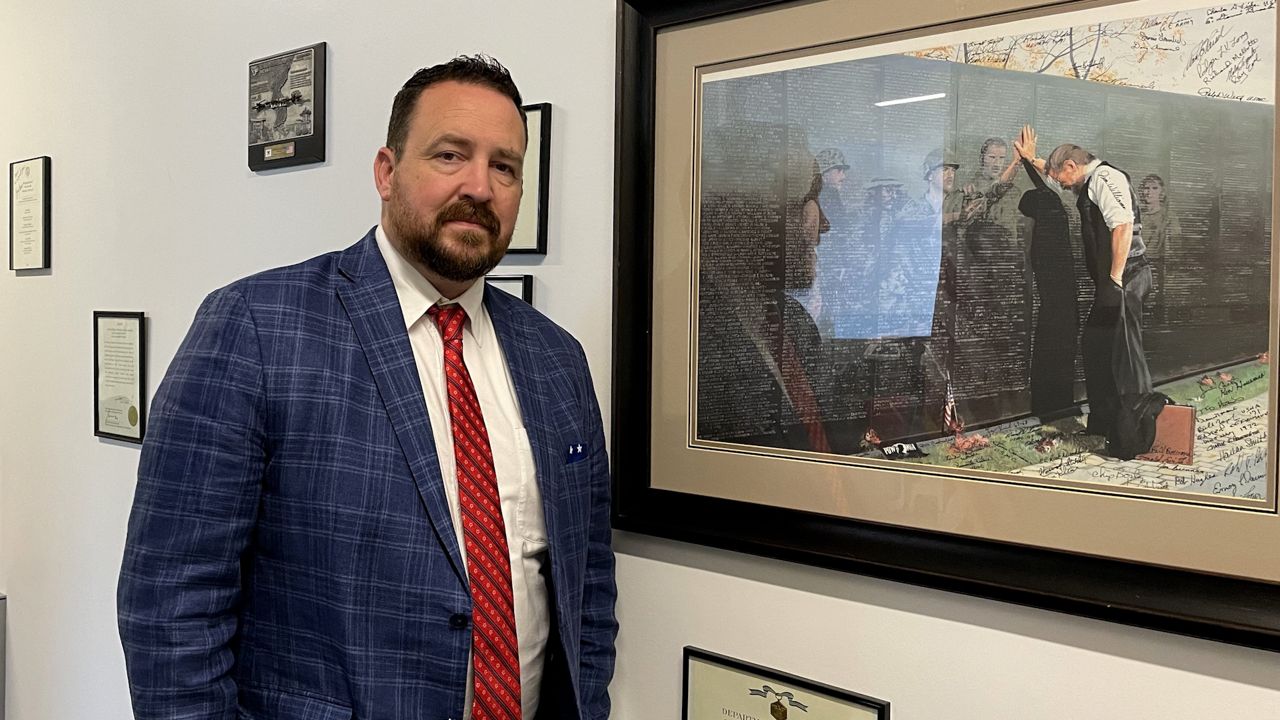 SACRAMENTO — Helping those in the military is hard to do without knowledge of what they go through.

Assemblyman Devon Mathis, R-Porterville, knows the struggles many veterans face while trying to access resources and services and said that’s one reason he ran for office eight years ago.

Before serving the Central Valley in the California Legislature, Mathis served our country by completing two tours in Iraq as a sergeant in the Army National Guard.

“It was my responsibility to try to find the roadside bombs,” Mathis explained. “I got an award for finding one and I got another award for getting blown up by one.”

The Purple Heart recipient said he never had in interest in being an elected leader until he came home and struggled with transitioning to civilian life. After graduating from Fresno State University, he got elected to the Assembly in 2014 and has made it his mission to help the men and women who’ve served our country.

“It’s a constant push. We push different legislation to get more veteran service officers in the community and those are kind of the frontline for veteran benefits,” Mathis said.

On this Memorial Day weekend, Mathis highlights the pain many veterans feel as we honor those who made the ultimate sacrifice.

“It’s a day where me and a lot of other veterans, we allow ourselves to emotionally open up to think about the pain of losing brothers and sisters in arms,” Mathis said.

The combat vet points out Memorial Day for him is also about remembering the veterans that have died by suicide.

“I’ve lost more battle buddies from suicide, from being home, than I have from two years in combat. It’s a good time not just to reflect on the memories of those that we’ve lost but also on the importance of mental health in our veterans that are struggling,” Mathis notes.

“The governor’s budget highlights $50 million that aligns with the task force work that we put forward in our legislation,” Garcia explained.

Garcia said his bill, AB 2032, will consist of members, stakeholders and experts from different departments and organizations from across California.

According to the Department of Defense, there were 541 military service members who died by suicide in 2018. AB 2032 requires the Department of Public Health to submit a report that includes the plans, strategies and programs that have been implemented to reduce military suicides.

Garcia also put forward a resolution that passed in the Assembly to halt the deportation of veterans.

“Some intervention must be taken on immediately,” Garcia said.

The DOD says there are 24,000 undocumented people serving in the military.

“We want to make sure that the federal government hears California’s position loud and clear that we want those deportations to stop.”

Another Southern California lawmaker with strong ties to the military is Assemblyman James Ramos, D-Rancho Cucamonga, who was recently named chair of the Military and Veterans Affairs committee.

“In all of my career, I’ve pushed hard for veterans to have resources,” Ramos said.

“Those that served in the military, any benefits that they’re receiving for their service to the country, shouldn’t be taxed in the state of California,” Ramos notes.

The measure, however, failed to pass in the Assembly Appropriations Committee, which Mathis said didn’t surprise him but was still disappointed.

“Sadly, in the state of California, over half the veterans’ issues that we push die in the appropriations committee because the state doesn’t fund them and it’s heartbreaking for me because we want to do good by our veterans and by their families,” Mathis said.

On this Memorial Day, Mathis wants to encourage his fellow veterans who have a hard time opening up about their past to share their stories with loved ones.

“The joy that’s on the other side of letting go of that pain and sharing that pain with your family is worth it. I know it’s hard because I struggle with it too,” he shares.