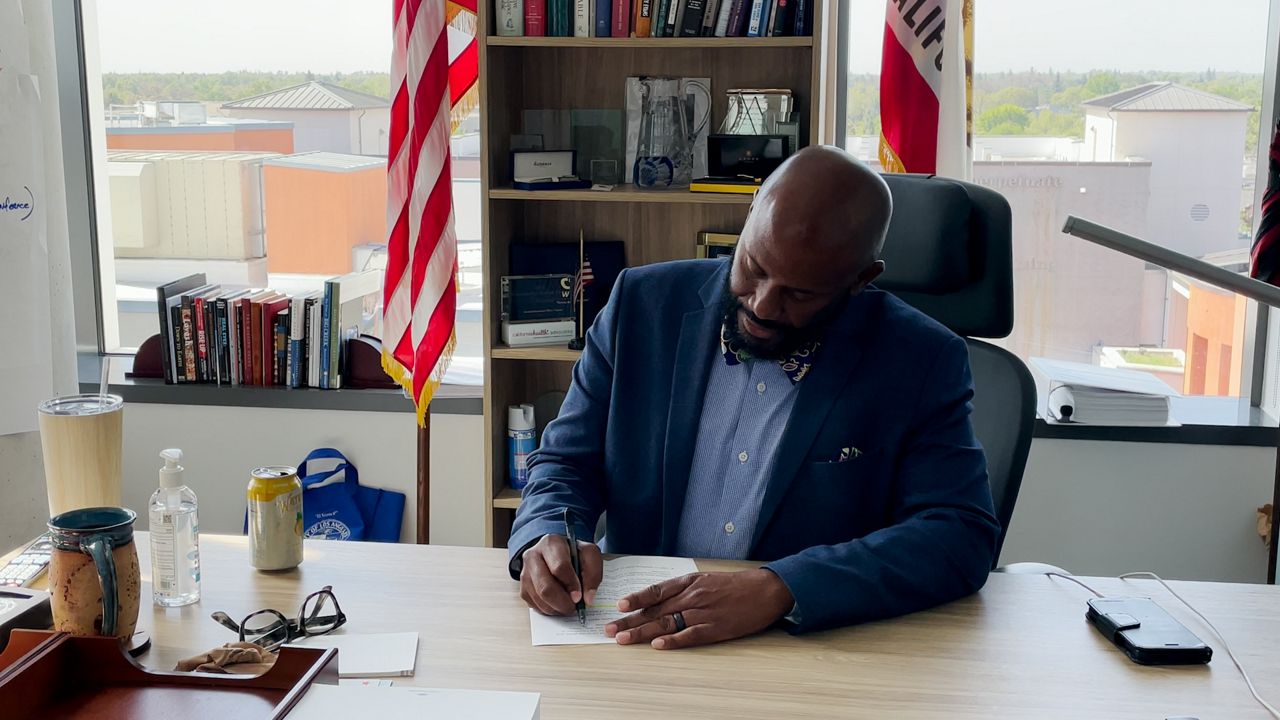 Assemblyman Mike Gipson was a police officer during the civil unrest in Los Angeles in 1992. (Spectrum News/Daniela Pardo)

California lawmakers share how the 1992 LA riots impacted their lives

Assemblyman Mike Gipson was a police officer and Assemblyman Reggie-Jones Sawyer was working as an emergency preparedness coordinator.

“Thirty years ago, I remember it very vividly. I was a police officer and was assigned to the Maywood Police Department. I was a small business owner of a mini market,” said Asm. Gipson, who represents the communities of Compton, Carson and Watts in the state Assembly.

Gipson, who was born and raised in the city that was up in flames, still remembers the pain his community felt when the verdict was read.

“It hurt the Black community, it hurt South Los Angeles, it hurt Los Angeles but as a result of that we were able to have conversations about our voices not being heard when it comes down to fairness in the justice system,” Gipson added.

Gipson explains one of the changes that stemmed from the 1992 riots and civil unrest was more African Americans running for office.

“It has caused me to put bills and polices in place to making sure that we make it uncomfortable for bad policers to remain in uniform,” he shared.

As the chair of the Police Reform Committee, Gipson says he’s committed to passing legislation to help end police brutality, a goal he’s had since he watched the beating of Rodney king and was reinforced when George Floyd was murdered.

His colleague, Assemblyman Reggie Jones-Sawyer, also remembers what it was like when he went into work after the officers who beat Rodney King were acquitted.

“I rushed to the emergency operation center where I witnessed the dysfunction of the city at the time,” Jones-Sawyer recalled. “I literally saw where Mayor Tom Bradley was in one office and Chief Daryl Gates was in another and they were sending emissaries in between to talk to one another and I looked up and the city was on fire and burning.”

He describes the days that followed April 29, 1992 as one of the most surreal moments of his life.

“I think for the first time the public had sympathy and empathy for African American males because the beating was so vicious — it was really a shock to the system,” Jones-Sawyer said.

The history buff says he’s made it his mission to study and learn from the events of the past to avoid making the same mistakes.

“The circumstances, the laws, legislation, policies, the training — everything that was considered good in the 60s, 70s, 80s and 90s no longer applies,” Jones-Sawyer added.

Gov. Gavin Newsom signed one of his bills into law last year that requires new recruits to have a bachelor’s degree or be at least 25 years of age before serving as a peace officer or prison guard.

“We’re going to retrain all of law enforcement in California,” Jones-Sawyer explained. “Everybody is going to be trained differently than they ever have before, so they understand CRT, psychology, mental health — because this is a different world.”

Jones-Sawyer notes that while it’s important for aspiring law enforcement officers to be trained on how to protect themselves, it’s also important they learn the skills to be socially conscious.

Gipson and Jones-Sawyer say they hope to continue to help improve their communities by using their platforms as legislators and policy makers.