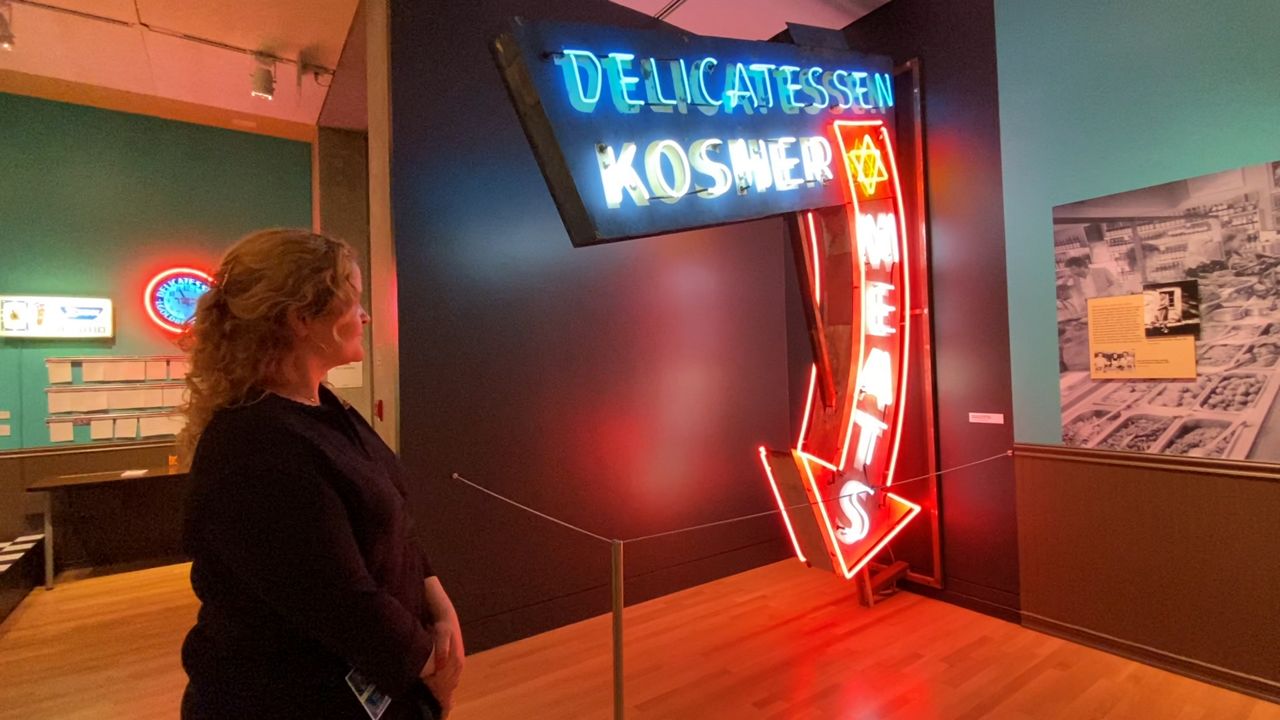 “I’ll Have What She’s Having” is a classic line from the film "When Harry Met Sally" and is also now the name of a new exhibit about Jewish delis at the Skirball Cultural Center.

Lara Rabinovitch, Laura Mart and Cate Thurston have been working on the exhibit for the past five years. The trio of co-curators traveled the country doing some delicious research.

“We ate pastrami and matzo ball soup at delis across the country from Langer’s to Shapiro’s in Indianapolis to Katz’s in New York City and many, many more,” Mart said.

“We, I think, collectively gained 20 or 30 pounds between the three of us,” she said while smiling.

But they also dug deep into archives and special collections. Visitors can check out all kinds of artifacts, including old menus, photos, matchbooks, as well as uniforms.

One of the centerpieces is a 1960s neon sign from Drexler’s Deli, which operated for 37 years in North Hollywood. Guests are also encouraged to write down their favorite deli food or memory on a ticket.

“We’re telling a big history about people and place coming together to create this uniquely American restaurant born of immigration, but why it connects to people, why we care, why we feel something about, it is because we like being there,” Thurston said.

The deli experience is very connected to Jewish identity and rooted in how Jewish immigrants came to the U.S. in the late 19th and early 20th centuries. Many of them started as street vendors with pushcarts.

“These are dishes that were brought by immigrants of different groups and that is really something that speaks to the role that immigrants from all over the world across areas have played in making the United States what it is,” Mart said.

But the deli’s appeal reaches far beyond the Jewish-American experience.

“We found that delis were often a fixture of the urban American landscape," Thurston said. "They’re open late. They had big portions. People who were coming from nightclubs, shows, would come to delis to gather."

While places such as Carnegie Deli and Nate and Al’s have closed up shop in recent years, the curators argue these types of restaurants are resilient and will continue to evolve.

“There is a Korean fusion deli here in Los Angeles ... and so I actually think that the food itself is more vital than ever,” Thurston said.

“Deli may not look like what it looks like today in 30 years, but I don’t think matzo ball soup is going anywhere,” Rabinovitch said.

And no matter your favorite dish, it’s an exhibit designed to be savored.