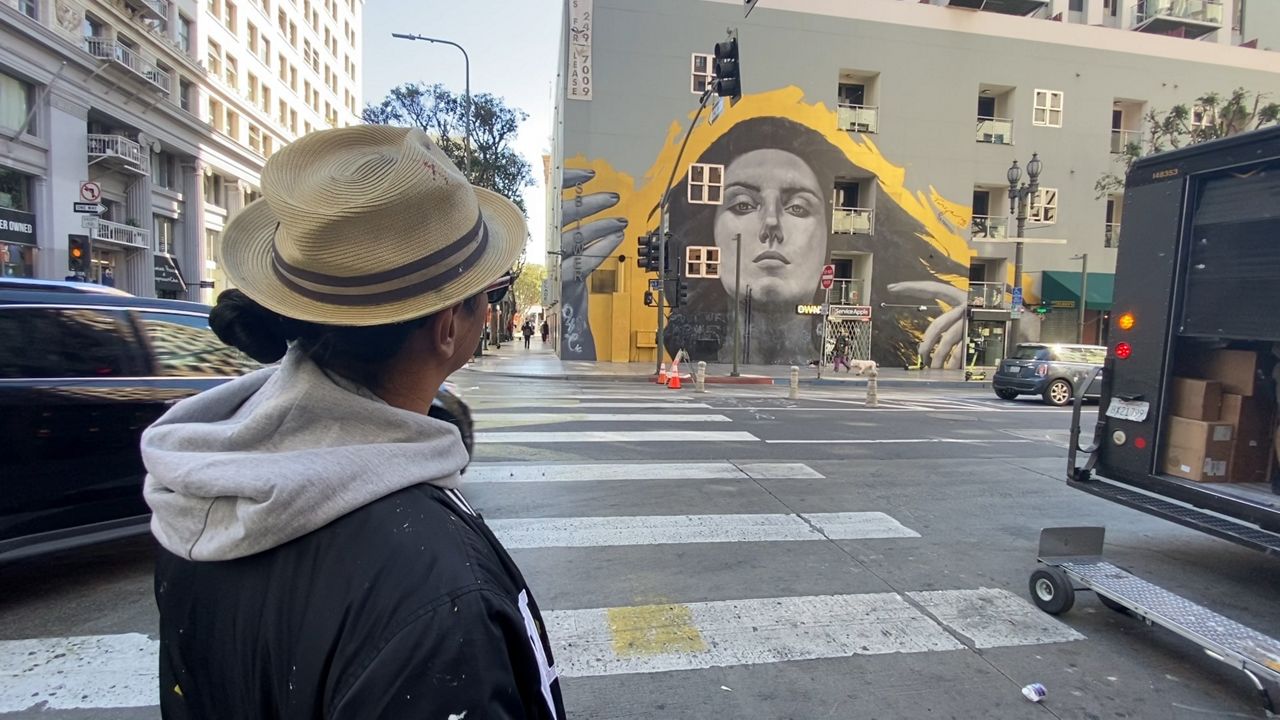 For muralist Robert Vargas, the city is his canvas

“I can’t remember when I wasn’t painting,” he said.

The city is his canvas and his work has helped revitalize the downtown art scene. It began with his piece entitled, “Our Lady of DLTA” at Sixth and Spring streets.

“It’s really a culmination of about four different women of various ethnic backgrounds to create this one idealized image of a woman here in Los Angeles,” Vargas said.

Since then, he’s been commissioned to paint dozens of pieces in the LA metro area and around the world.

“It’s not so much about painting every white wall that I see or even taking on every commission. It’s about having something to say when you have that space.”

And he certainly did during the summer of 2020 when he painted peace, unity, love, and change in what he called the intersection of introspection — also at Sixth and Spring streets.

“The person that doesn’t have access to the arts gets to interact with the piece and even see it created. Oftentimes, you don’t get to see the artists in their studio, in their element,” he said.

While artists often die before they’re recognized for their talents, Vargas said, “It’s nice to receive my flowers while I’m still here.”

The LA City Council recently voted unanimously to name the intersection of Pennsylvania and Boyle avenues in Boyle Heights in Vargas’ honor, just steps away from the hospital where he was born.

“It’s super humbling to be able to even be a part of the canon of Los Angeles art and culture,” he said.

But Vargas still has plenty of painting in his future. In fact, he’s chasing a world record.

“This will be the largest mural in the world by one artist. It’s painted entirely free hand, no grid or no projections,” Vargas said, staring up at his unfinished mural near Pershing Square.

The piece is called “Angelus” and is 14-stories tall. It depicts a girl from the Tongva tribe — the original LA natives — signing the word “unity” as well as an image of Kobe Bryant and angels. He wants to finish it by the summer.

“My hope is that people can look at this mural and feel pride for being from the city,” Vargas said.

He prides himself on being accessible. He loves seeing how people develop relationships with his murals, including this one of a mariachi across from Mariachi Plaza in Boyle Heights.

“This was my way again of turning the everyday working class into monumental hero,” Vargas said.

A man parked his lowrider in front so he could take a picture. Little did he know who he was about to meet.

But no matter where his travels take him, Vargas said Boyle Heights is never far from his mind.

“Every time I paint anywhere in the world, you are always with me,” he said.

And now an intersection will soon become a permanent reminder of what he means to the community.