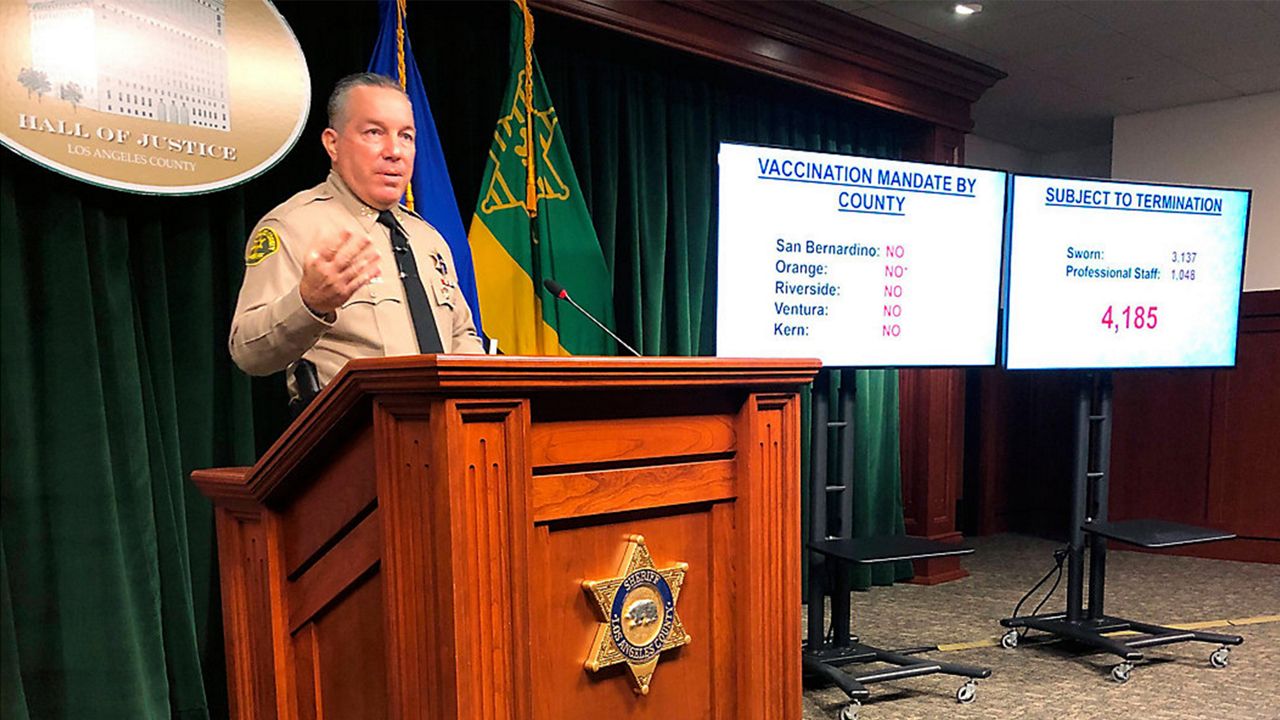 In this Nov. 2, 2021, file photo, Los Angeles County Sheriff Alex Villanueva announces he will not enforce the county's vaccine mandate and claimed his employees would leave the agency in droves rather than get their shots during a news conference in Los Angeles. (AP)

Los Angeles County Sheriff Alex Villanueva is defending his decision not to enforce the county's vaccine mandate as he is faced with losing critical personnel.

"We are severely underfunded, we are understaffed," Villanueva told "Inside the Issues" host Alex Cohen. "I cannot afford to lose a single person."

In August's order approved by the Los Angeles County Supervisors, county employees had until Oct. 1 to submit proof of their vaccination status or face disciplinary action.

This week, Villanueva spoke in-depth with "Inside the Issues" about his stance.

Villanueva himself is vaccinated and told Cohen he has always encouraged vaccines and presented the risks of COVID-19 to his staff members and deputies.

"So they know what they are walking into, but at the end of the day it's a privacy issue, it's a medical decision that rests with each and every employee," Villanueva said.

Villanueva said he is faced with the dilemma of a mass exodus.

"I have a 20% uptick in people that want to retire early," Villanueva told Cohen.

LASD has 238 employees that want to sign up for another agency out of state, according to the sheriff. This is in addition to the 1,600 employees who are eligible for retirement.

The sheriff said it takes him 16 months to replace an entry-level deputy, and he can't afford to lose anyone to disciplinary action.

He said not everyone is entering their information into the new Fulgent Genetics registration system.

"That backlash we're dealing with it right now," Villanueva said.

He said employees don't agree with the survey asking about gender identity and sexual orientation in addition to vaccine status.

Villanueva said vaccine requirements and the registration system are a supervisor overreach.

"It's political now, it's not about the science," Villanueva said.

The sheriff told Cohen his department is trying to find ways to work around the Fulgent system.

Before his conversation on vaccines with "Inside the Issues," the sheriff commented about a judge's latest decision to dismiss a retaliation case by LASD whistleblower Deputy Art Gonzalez.

"The truth is catching up, the evidence is not there," Villanueva said.

At the center of the case is the conduct of an alleged violent gang within the Sheriff's Department who call themselves "Executioners."

"Now that the cases are starting to come in with decisions, the truth is catching up to the false narrative that's being pushed by activists, by the board of supervisors and by their political appointees and the civilian oversight commission and the inspector general," Villanueva told Cohen.