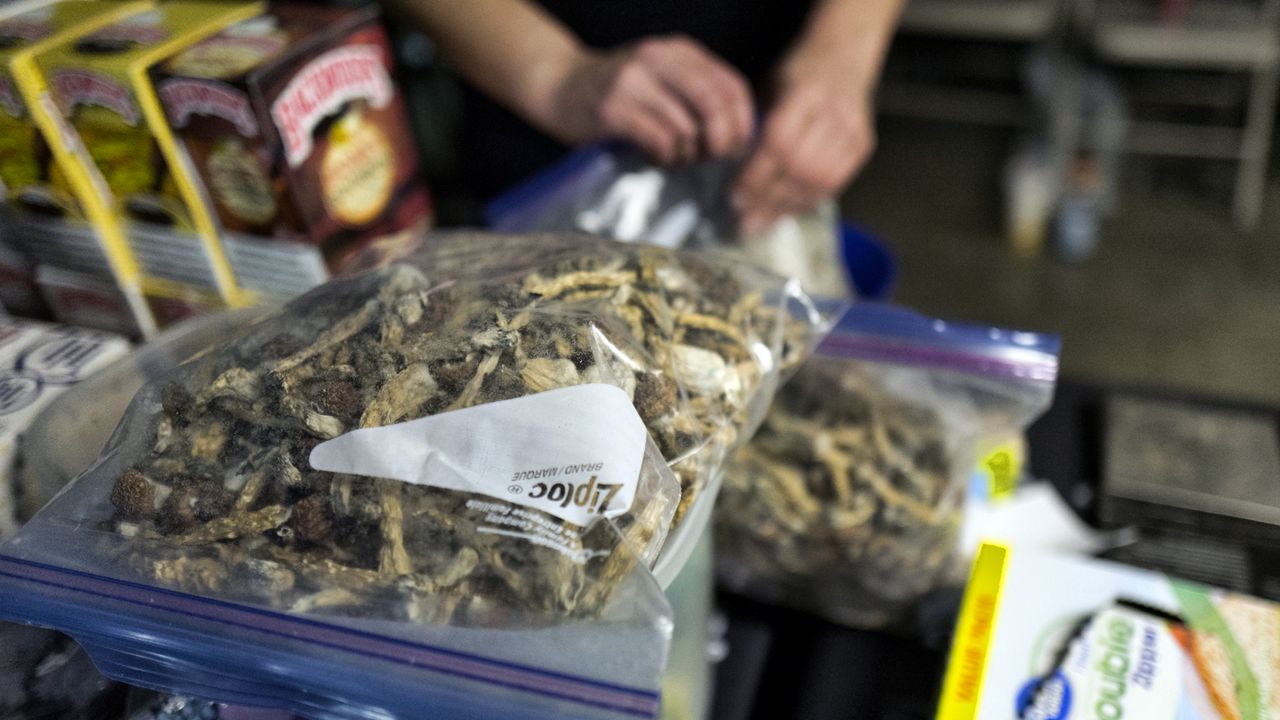 A vendor bags psilocybin mushrooms at a pop-up cannabis market in Los Angeles on Monday, May 6, 2019. Voters decide this week whether Denver will become the first U.S. city to decriminalize the use of psilocybin, the psychedelic substance in "magic mushrooms." (AP Photo/Richard Vogel)

By Inside the Issues Staff and Alex Cohen El Segundo
SHARE

Medicinal legalization of psilocybin in Oregon and decriminalization in seven major cities across the nation has led to an increased interest in the use of psychedelics for both medicinal and recreational purposes.

Senate Bill 519, introduced by Senator Scott Wiener (D-San Francisco) would legalize the possession of psilocybin, psilocyn, DMT, ibogaine, mescaline, LSD, ketamine and MDMA for Californians 21 and up. A vote on the bill has been pushed to next January.

Michelle Lhooq, drugs and music journalist and author of the “Rave New World” newsletter on Substack and of the book "WEED: Everything You Want to Know But Are Always Too Stoned to Ask" tells "Inside the Issues" “shrooms are the new weed” and more Angelenos are experimenting with psychedelics during the pandemic.

"WEED: Everything You Want to Know But Are Always Too Stoned to Ask”

The perception that legalization or decriminalization is imminent has led to a flourishing informal market for psychedelic substances here locally.

“There’s a lot of different micro-scenes all over LA. You have really bougie parties in Malibu in mansions where the, sort of, bourgeois are having psychedelic parties with micro-dosed shrooms and sparkling water enhanced with MDMA and then you have backyard barbecues in Echo Park where you might have a mushroom tea being offered with bands and live music being played,” explains Lhooq. “So, it really runs the gamut, I would say.”

A lot of these parties are happening during the day and in relaxed environments — a change from the 1960s and '70s.

“In general, I think the old stereotype of sketchy, underground deals and unsafe environments, is not really the case anymore. This is very much a modality centered on wellness and self-optimization,” Lhooq said.

Many people have begun to experiment with micro-dosing these psychedelics, where users take a very small amount of a drug.

“Usually it’s not even enough to feel the psychotropic effects,” Lhooq said. “it’s more of a subliminal, gradual effect that stacks up over time and there are demonstrated health and mental health benefits to doing that.”

“I would really recommend, actually, if you’re going to start walking down the path of psychedelics for the first time, doing it under the supervision of someone who can hold you and take care of you and hold space for all of the emotions that might come up.”

Click the arrow above to watch the conversation. Let "Inside the Issues" know your thoughts and watch Monday through Friday at 8 and 11 p.m. on Spectrum News 1.