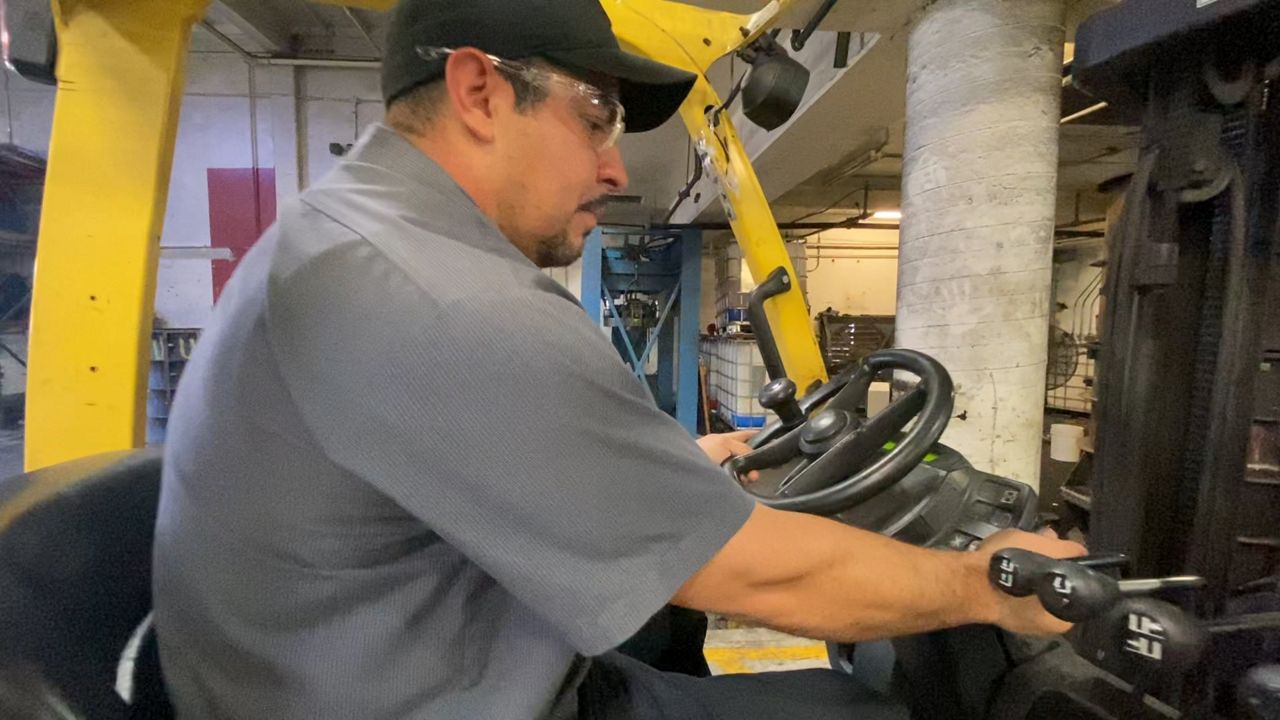 "This is my first job ever. I've never worked in my life," Arceo said.

The company recycles old California truck tires and turns them into products such as rubber flooring for home gyms. The company says its sales grew more than 60% in nine months last year.

Arceo lived a criminal lifestyle on the streets until it caught up with him, and he was sent to prison for almost a decade.

"At the time I was incarcerated, I left two daughters and my wife, and now I have a 6-month-old son," Arceo said.

They inspired him to ultimately turn his life around and put the past behind him for good. Arceo is part of U.S. Rubber's Bounce Back! program, which gives ex-felons like him a fresh start. In his two years with the company, he's already received multiple promotions.

"I remember my first paycheck, and I looked at it, and I said, 'Wow!'" Arceo said.

He says as many as two-thirds of his workers have spent time in prison.

"I'm not a bad person. I just made a bad decision," said Thomas Urioste, one of the employees.

And it's usually almost impossible for them to find a job when they get out.

"They'll fill out an application. They'll check the box felon. That's the end of the application process," Baldassari added.

On paper, Baldassari says it makes almost no sense to hire them. Most have no previous experience or have only worked a few months at several different places. He saw a 65 to 70% turnover.

"These are individuals who have been told for many, many years how worthless they are, how much of a drag on society they are. They don't deserve anything. They committed a crime, whatever that may be, and they start to believe that," Baldassari said.

Baldassari knew he had to change the work culture, so he enlisted the help of Nancy Lambert, a psychiatric rehab counselor. She's a resource and someone the employees can talk to confidentially.

"It's a whole total different environment day by day, 8-hour shifts. You get tired. We're not used to this type of environment. We just have to accept it and fit into it," Arceo said.

Baldassari says hiring ex-felons allows him to keep up with demand and quickly expand his workforce, jobs few others will take.

"If we didn't have that talent source to tap into with ex-felons, we wouldn't be able to do this," Baldassari said. "There's no question about it."

He says watching his employees transition and become productive members of society is a priceless feeling.

"After six months to a year, you start seeing their chest come out. They're proud," Baldassari said.

"I had clean hands with dirty money, and now I have dirty hands with clean money," Urioste laughed.

As for Arceo, he's making the most out of his second chance.

"My whole family, they're still kind of shocked to see what I've overcome and how far I've made it since my release from prison," Arceo said. "It's just a whole brand new Carlos was reborn again."