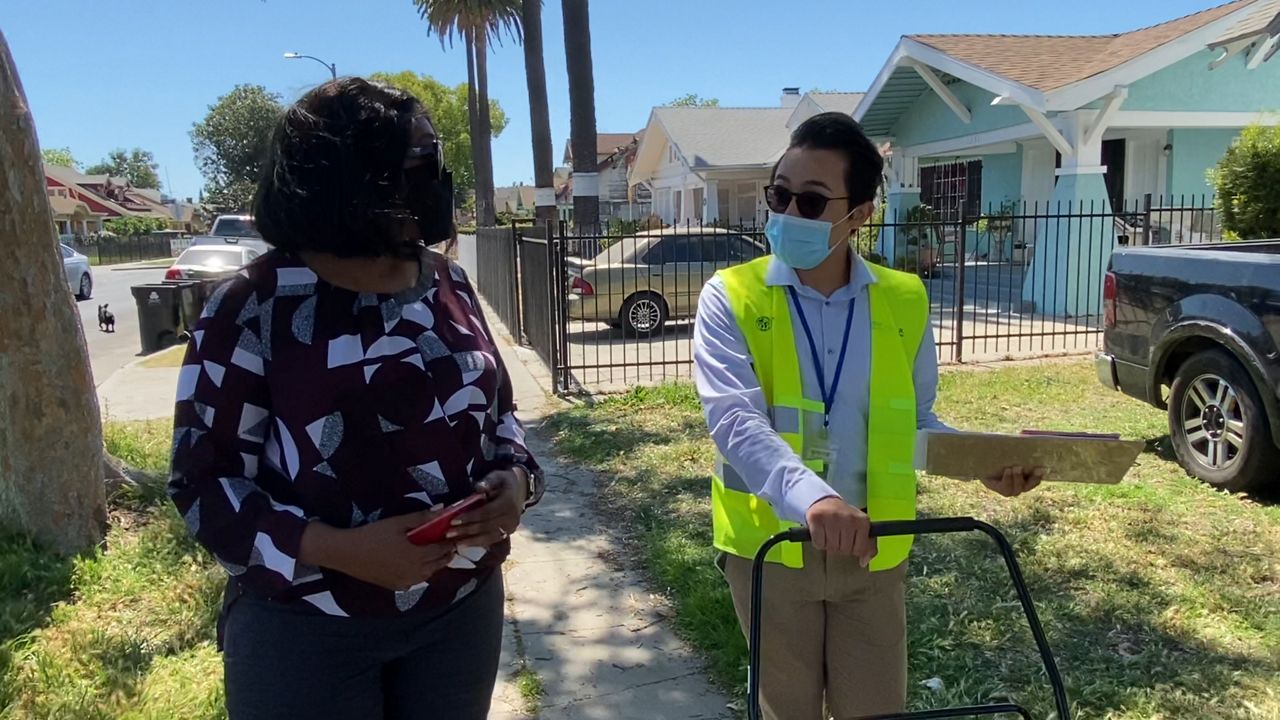 It started with a rally at Los Angeles Trade Technical College.

Hundreds of people gathered from various community groups across the city. Carolyn Bell and Sharon Diggs-Jackson were sporting colorful “Vax for the Win” t-shirts.


"Having our canvassers come and be easily recognized, we know that that will be helpful," Diggs-Jackson said.

The two recently hired 25 canvassers to go door-to-door in Long Beach, letting people know the vaccines are free, safe and can help end this pandemic. Their goal is to reach 20 to 40 households per day, but they say teams have been hitting more than 100 a day.

"We’re trying to provide them with information that will help them to make that decision, maybe to change their mind, to dispel any myths that they may have," said Diggs-Jackson.

"[It was] a little bit nervous, nerve-racking, but I think it’s an honor to meet her," Márquez said.

The pair went door-to-door encouraging residents to get vaccinated. Their first stop was a success, signing one man up for an appointment.

"We believe there are so many more people out there who have not gotten vaccinated that want to get vaccinated," said Richardson, who has spent months working to get efforts like these off the ground. "Actually getting to see this at work is just incredible."

"Typically, out of every 15 houses, you get one," Márquez added.

It's one more person who won’t spread the virus. Márquez said understands the mistrust among immigrant populations. He grew up in El Salvador and came to Los Angeles when he was 12. He just graduated college and is the first in his family to do so.

He said he’s proud to serve his community and spread the word to stop the spread of COVID-19, adding that he never knows who he’ll meet or what he'll find.

One house, for instance, had a tortoise hanging out in the front yard.


Márquez offers every person a free box of masks, and if nobody is home, he’ll leave information in multiple languages about how to get vaccinated.

"It’s too new for me," said one man, who added that his wife was already vaccinated.

"If you’re going to do it anyway, at least be in that drawing," Richardson told him.

Richardson said she knows not everyone will be swayed, but it won’t be for lack of trying.

"I think you have to look back on this and say we did absolutely everything we could to encourage, motivate, support and empower people to save lives," she said. "No stone should be left unturned."

And after a year of isolation, meeting people face-to-face may just be their best shot.