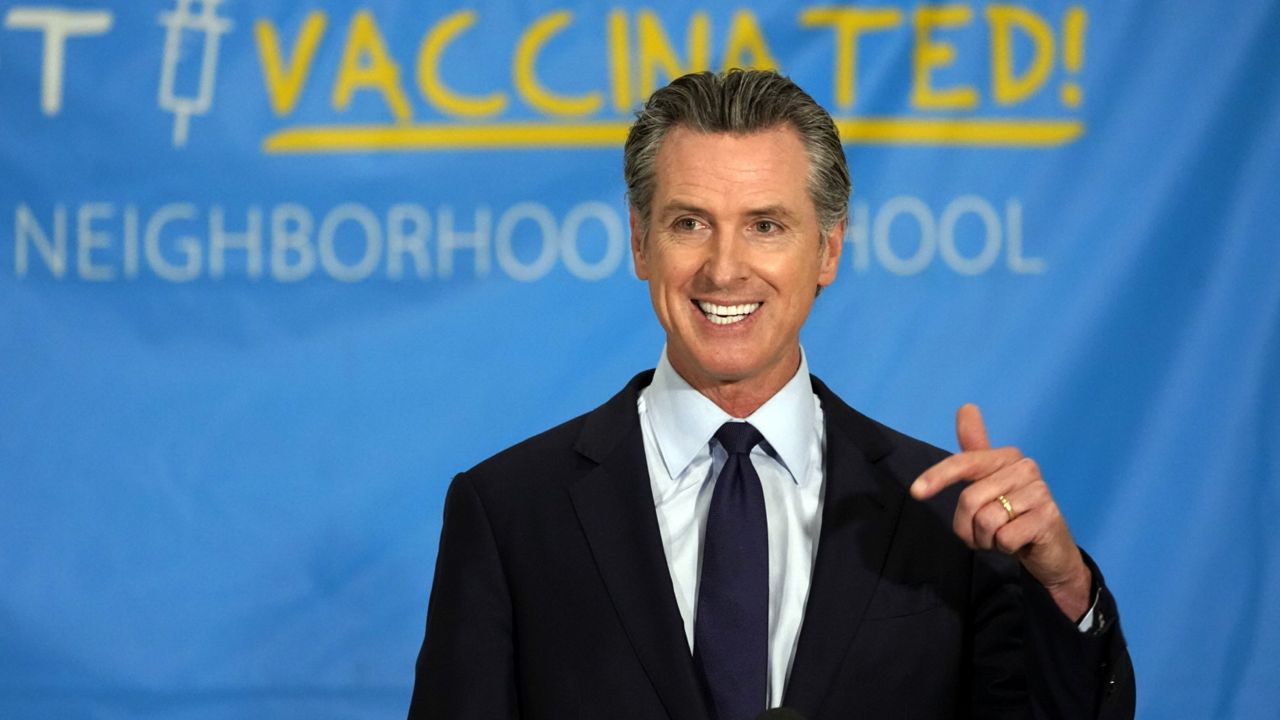 California Gov. Gavin Newsom announces a massive jackpot as the nation's most populous state looks to encourage millions of people who are still unvaccinated to get their shots at a news conference at the Esteban E. Torres High School in Los Angeles, Thursday, May 27, 2021. (AP Photo/Damian Dovarganes)

The messaging is certainly not subtle. Get vaccinated and you could win big — up to $1.5 million on June 15.

"Over the course of the last few weeks, as we saw that decline in those first doses, we realized we needed to do a little bit more than just our traditional outreach," said Gov. Gavin Newsom at the first vaccine prize lottery in Sacramento.

On Friday, Gov. Newsom randomly picked 15 Californians to each receive $50,000 after getting their second vaccine dose. It’s all part of the “Vax for the Win” campaign.

Among the winners, three were from LA County, three from San Diego County and one from Orange County.

Meanwhile, LA County is giving away a pair of season tickets to see the Dodgers or LA Football Club. It’s already offered up free season tickets for the Lakers, LA Kings and LA Galaxy.

Hungry? Shake Shack is giving away free fries with proof of vaccination and Krispy Kreme is doling out free donuts…

And don’t throw away your shot at free Hamilton tickets. The Pantages is holding another vaccine pop-up site on June 12.

Not a theater fan? United Airlines is giving out free flights for a year to five lucky winners in its "Your Shot to Fly" Sweepstakes and getting vaccinated at CVS could win you free cruises, tickets to Super Bowl LXVI here at SoFi Stadium in LA, or cash.

"When you offer people money, incentives, trips, lotteries…all that stuff, it may override their ability to make a decision for themselves because they are stimulated, attracted, seduced by the money," said John Tsilimparis, an LA-based Marriage and Family Therapist.

He says rewards are a powerful tool but feels giving away millions of dollars crosses an ethical line.

"It does sort of trivialize it. It turns it into a little bit of a game, and it doesn’t give respect to those that have lost their lives," Tsilimparis said.

The state is also giving away $50 gift cards but only to the first two million Californians who were vaccinated on or after May 27. Some doctors fear rewarding those who wait sets a dangerous precedent.

"They may hesitate and not get their booster or not get another vaccine because they may think that, 'Oh well, I’ll just wait for an incentive,'" said Dr. Thomas Yadegar, ICU Medical Director at Providence Cedars-Sinai Tarzana.

Yadegar was on the front lines during the height of the pandemic and says the medical community nationwide is hurting.

"We’ve lost a lot of nurses, doctors, and respiratory therapists, and I think if there’s extra money to be had, I wish that the money was given to their family members who are left behind, the front-line workers," Yadegar said. "Educating the public would probably be a better way to go about it and recognizing that this is America. We’re not going to get 100% vaccination."

Yadegar says ultimately, the best prizes don’t come in a box or through any bank account.