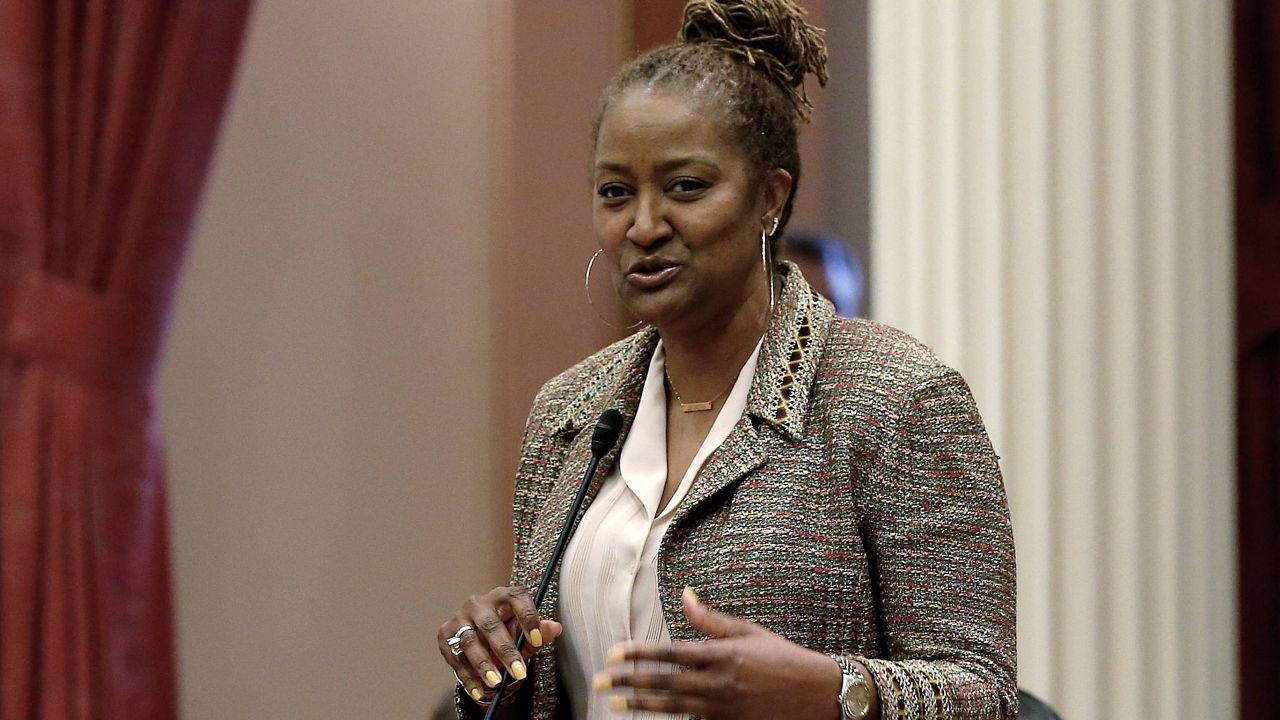 In this May 22, 2019, file photo, State Sen. Holly Mitchell, D-Los Angeles, chairwoman of the Senate Budget Committee, addresses the lawmakers at the Capitol in Sacramento, Calif. (AP Photo/Rich Pedroncelli, File)

“So my mom, back in 2010 when I first ran for office in the state assembly, [we went to] CJ’s. [It’s] a great breakfast spot in midtown [that] was kind of our hangout, our collective hangout,” she said. “I think in her mind, [she was] trying to calm my nerves and kind of normalize the day for me. That fast became a tradition. There was a group of seniors, who used to hang out there regularly, they would tease me, and I would tell them, ‘OK, I’ll buy your breakfast if I win.’ That became our tradition, and every Election Day, even if I was not on the ballot, I would go have breakfast at CJ’s and buy my group of seniors, pay for their breakfast that day. Most of them are gone unfortunately, including my mother, but it’s just sort of become the thing I do on Election Day.”

On November 3, Mitchell ordered catfish and grits like she has for the past 10 years. It made her feel “settled” on Election Day.

“This has been a very unusual campaign season for myself and for the country. I felt that I had done all I could. There were no regrets. I was very proud of the campaign we ran. I said from the very beginning I was not running against anyone. I was running for something. We stuck to that. I felt good and comfortable in my skin in terms of how I have run my campaign and that I left it all out on the field. There wasn’t another call, another phone bank, another anything I felt I could do,” Mitchell said.

Councilman Wesson termed out on L.A. City Council. People told Mitchell that she should not run against Wesson for L.A. County Supervisorial District 2 so that he would have a better chance winning the seat.

“Campaigns and elections can’t be seen as popularity contests or issues around, ‘I’ve known this person forever.’ We really have to look at the nature of the work of the new office and who is best prepared to do it. Elections are like job interviews. We all have friends that we would not hire, and we really have to ask those tough questions. My point and my thought process in deciding to run was I knew that I have spent most of my professional career doing the kind of work the county oversees,” Mitchell said. “From my time at Crystal Stairs where I managed a major county contract in childcare, to really the entire focus has been around the family supportive issues, the criminal justice reform issues, the foster care issues that sit in the county seat of government. “When I just look objectively in terms of work history, experience, areas of public policy focus, I really felt that I was the most appropriate match for the seat. That is why I made my decision to run. I think ultimately the voters agreed.”

.@LACountyBOS is now made up of five women since @HollyJMitchell won the District 2 race.

"I think it is a culture shift away from prosecution and incarceration to a more caring, hopeful, helpful county government."

Watch Inside the Issues tonight at 7 and 10 p.m. for more. pic.twitter.com/PkNklRpi1x

Mitchell said she and Councilman Wesson are different enough that she felt she could run and win.

“There’s always speculation about who’s in position, who will run for what seat. I kind of had in my mind some folks might be interested in running for the seat. I really thought about it in terms of skill set and base and who supports us. I thought, ‘If X person runs, maybe I won’t because we have similar backgrounds and experience and a similar base.’ That did not apply to my ultimate opponent. I thought we came from very different backgrounds and a different base of support and different perspectives. I knew it would be competitive, but I was willing to put in the hard work. I think there is a variety of ways to slice because I think there is a gender element. I think there is a generational element. There is this notion of paying your dues and what that means and what that looks like. There is kind of an old school, new-school frame in politics and in power. We’ve seen a number of communities really begin to push and challenge that,” Mitchell said.

Mitchell is proud to be part of an all-female Board of Supervisors. In the past, the Board was made up of five men who were referred to as the “Five Kings.”

Now, the Board has “Five Queens.”

“First of all, I am so honored and want to thank the voters for entrusting me with this responsibility. The vast majority of my life, it was the five kings. For Kenny Hahn to have held this seat for 40 years is phenomenal. When I close my eyes, I imagine the Board of Supervisors, institutions like Zev Yaroslavsky and Kenny Hahn come to mind immediately. This is an indication of a seat change. Around the passage of Measure J, around the potential shift in our district attorney. I think it is a culture shift away from prosecution and incarceration to a more caring, hopeful, helpful county government. I look forward to being a part of the next generation,” she said.

As a L.A. County Supervisor, Mitchell said she will prioritize navigating the public health and economic pandemic.

“We have to figure out a way to safely and appropriately reopen our schools for our teaching staff, staff, and students, because if we can’t open the schools and parents aren’t confident that their kids are safe, we can’t open our economy fully,” Mitchell said. “People can’t go to work with confidence, so that’s got to be our first priority. Dealing with our unhoused. Making sure that we are continuing to protect those whose current housing is tenuous at best and providing housing to those who are living on the street as quickly and humanely as possible. We have to deal with addiction. We have to deal with mental illness. We have to make sure the economy is thriving so people have jobs. Those are the indicators of truly reducing crime. Then we have to make sure that we stand up government systems so the police can do police work, not social work or mental health crisis intervention work or homeless case manager work. That is not what they signed up for, that is not what they are trained for. If we could stand up these other areas of government, narrow the kind of events that they have to respond to, we will have grown the kind of L.A. County that we all want to call home.”