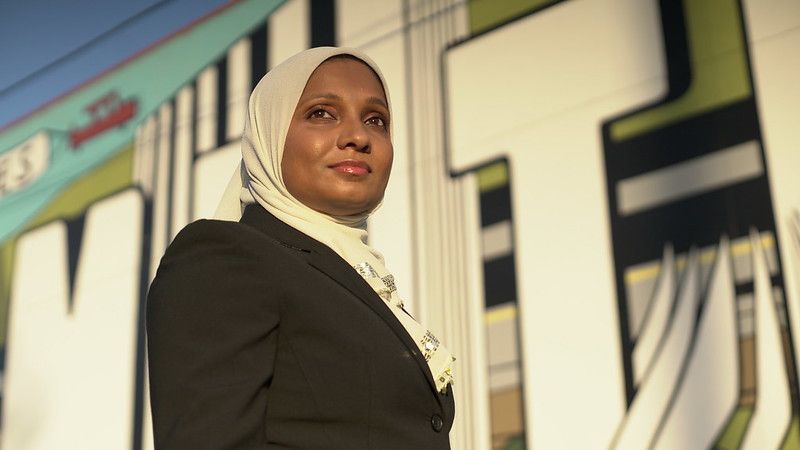 Fatima Iqbal-Zubair, a science teacher in Watts, is running for California’s 64th Assembly District race as a Democrat. She is challenging incumbent Asm. Mike Gipson, also a Democrat, who she says isn’t doing enough to protect the health of his constituents.

If elected, Iqbal-Zubair would be the first person of Sri Lankan heritage to represent the district and the first Muslim to serve in the California State Assembly.

“I’m a public school teacher. I'm a mother. I'm an immigrant,” she told Inside the Issues.

Iqbal-Zubair’s passion for politics was ignited back in 2016, and inspired by Sen. Bernie Sanders who  brought up a lot of conversations about things that weren’t being talked about, she explained. The Senator has recently endorsed Iqbal-Zubair.

This was around the time Iqbal-Zubair started working as a teacher in Watts, where she began to notice people who weren’t always given the best opportunities.

While teaching, Iqbal-Zubair also noticed the environmental conditions her students were living in, like cloudy water in the water fountains.

“There are privileges I grew up with, but my students had this in their homes, in the projects, and they would kind of laugh it off," she said. "But obviously, this is not normal. Healthy water, clean water is a human right. Water is life. So, that was the first introduction I had to that. And then, our first year, our football field couldn’t be used because of lead and arsenic toxicity. When I dug deeper, we found out that the projects a lot of the kids lived in was built on top of an old steel factory.”

Those discoveries led Iqbal-Zubair to work with groups like Watts Clean Air and Energy Committee, and Watts Rising. She also started a robotics competition team at the school.

“I was appointed to the leadership council at Watts Rising because of my work, because I was a science teacher, so with my work with the students, they saw me as a community stakeholder,” she said. “I really thought this is a great way we could kind of have bottom-up politics. Unfortunately, that’s not what it was really about. It was about Gipson presenting his agenda through his staff, and us being the great community leaders we can be, and to keep doing the great things we can do."

While serving as the education commissioner for Asm. Gipson, Iqbal-Zubair said she started looking into his record on environmental policies.

“I remember hearing his record on environmental justice particularly and having tears in my eyes, knowing the things that I talked about that were happening in Watts.”

She said, if elected, she will look at environmental policies in the long-term.

“This is about the future of our children," she said. "Let me tell you something. I can talk a little bit about Wilmington right now. Carson is not the most highly impacted part of the district. But Wilmington — there are some of the highest rates of cancer and asthma there. Look, this is not about him, it's not about me, this is about the people that have cancer, that have asthma, the kids that are getting nosebleeds.”

Iqbal-Zubair said she does not take any sort of corporate money, which gives her the freedom to act on behalf of the people.

“I would have community members front and center and listen to their fight," she said. "What their fight has been asking for is what I want to achieve, which is: creating a buffer zone between where drilling is and between where people live, play, and work. Eventually working towards ending fracking. That’s something I want to do. We don't need to frack. It’s very dangerous. It, in fact, leads to earthquakes and other health consequences, too.”

“I would like to think about transitioning our grid in California away from refineries and a just transition towards renewable energy,” she continued. “There are great jobs in the industry. It's not going to happen overnight.”

When it comes to the relationship between the police and the community, Iqbal-Zubair said she will work on reallocating funds to help people who need it.

.@fatima4assembly is running to represent CA's 64th Assembly District. She wants to invest in housing, schools, and healthcare.

She said public safety should be "some sort of community accountability force." She also said police "have no place in schools." pic.twitter.com/pwZJy0QU8g

She said it’s absolutely wrong to have police in schools, especially those who carry semi-automatic guns.

“One thing that's really important to me is that police have no place, first of all, in schools. Schools are a place to be safe and to learn, and what our kids need is more counselors, more social workers, nurses, and better-paid teachers.”