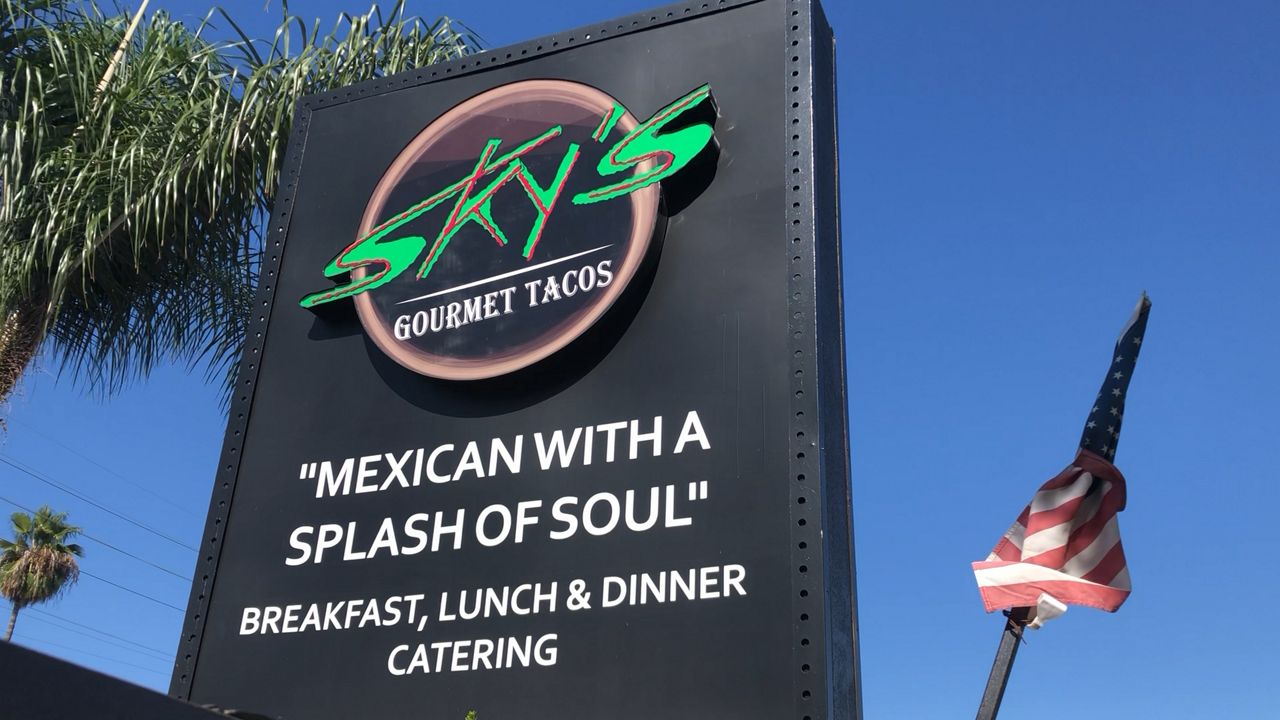 After 28 years behind the grill, Barbara "Sky" Burrell is used to the reaction she gets when people find out she owns a taco shop.

She owns Sky’s Gourmet Tacos on Pico Boulevard in the Mid-Wilshire area, where she's been serving up Mexican food with a splash of soul for decades.

It’s received a ton of publicity over the years, even from the late famed restaurant critic, Jonathan Gold. Burrell says her mother cooked for celebrities like Diana Ross and food became her introduction to other cultures.

"When I met the taco, I fell in love," Burrell says.

She’s been part of Black Restaurant Week in Los Angeles every year since it started in 2016.

"Right now, our exposure for the Black, African-American restaurant is tremendous," Burrell says, who knows this year carries a greater social significance than in year's past.

Partly due to the racial protests, she says business has doubled, and she’s seeing new customers daily.

Marcus Ohuonu just moved to the area from Atlanta in early August, and this was his second time back.

"I got the shrimp taco and chicken. So good. I had to come back," Ohuonu says.

"The diversity that comes into our restaurant is unbelievable because of protests, because of black restaurant week, and it’s really very positive," Burrell says.

But she says it’s her persistence and dedication that has driven her success both as a black restaurant owner and a woman in a male-dominated industry.

"We’ve been at a disadvantage, but me, I never thought once I was going to step back," Burrell says.

She continuously strives to be a role model and support other restaurants looking to make their mark.

"My goal is to assist in the area of philanthropy with black-owned young restaurants that have traction."

These days, she doesn’t do as much of the grilling anymore, but you’ll still find her in the kitchen a couple times a week.

She says most of her employees have been with her at least 10 years and while they don’t always get along, she’s not afraid to push them.

"Let’s see that the shell is cooked well please. Cook the shell well," she shouts to her employees across the kitchen.

"You can’t just half-ass train and say would you do so and so? You have to have intention that it gets done the proper way. Otherwise, you’ve got a mess," Burrell says.

And after almost three decades in business, there's no doubt she’s made a name for herself in the kitchen.

"It’s the best place to be," Burrell says.

Not just for serving up tacos, but serving as an example for other women of color in the community.

"As a mature black woman, that says to the rest of my peers, 'I did it.' You have that opportunity and you can do it too."