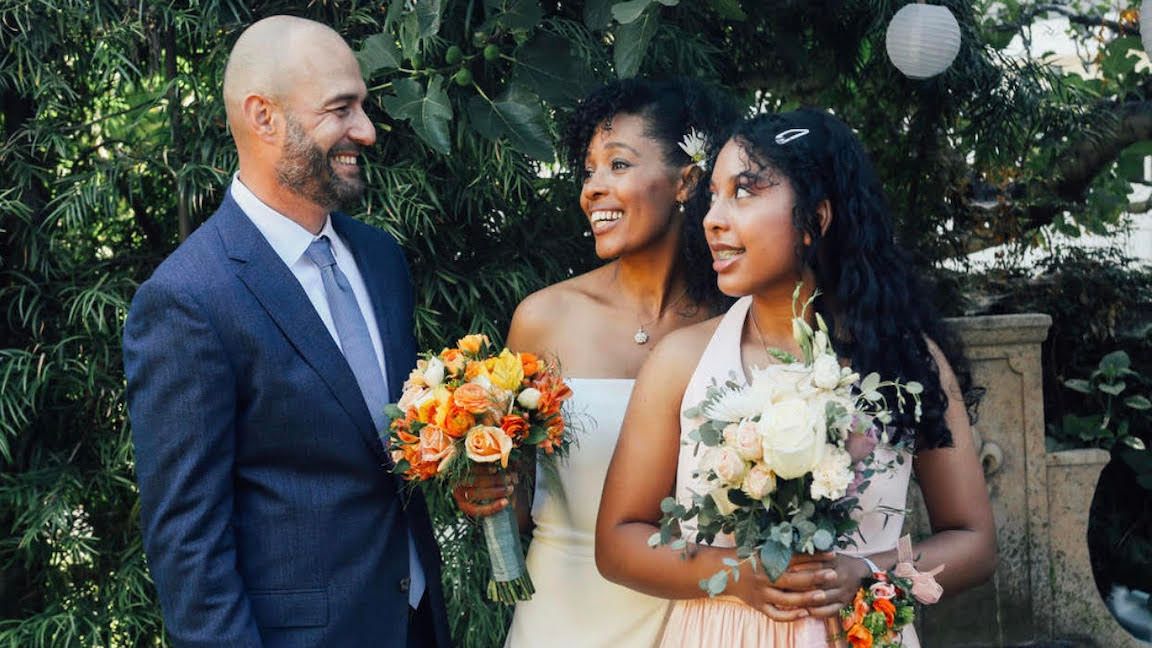 Actress Tembi Locke on Experiencing Loss, Finding Love, and Starring in “Never Have I Ever”

Wedding bells and school bells are two sounds that have defined actress and author Tembi Locke’s year so far.

Locke stars in Mindy Kaling’s show, Never Have I Ever, which was released on Netflix in late April. She plays the mother of Fabiola, a teenage girl who is trying to navigate the throes of high school and come out to her parents at the same time.

“When I was filming this, prior to quarantine, you know I’m appearing on this show that I love, I love the scripts. I had no idea right -- first of all, I didn’t see all of the scripts. I didn’t actually know where the season was building to, that the show is also about loss and grief,” she said.

“[I’ve been] hearing from people, especially people who have come out to their parents, how touching the show, what the show has meant to them. Children who have been through grief have talked about how truthful the show is for them. It’s just been amazing. I feel so honored to be a part of it, and at a time when everybody is turning to watch it.”

"It's just been amazing. I feel so honored to be a part of it, and at a time when everybody is turning to watch it."@TembiLocke stars in @mindykaling's @netflix show #NeverHaveIEver. She said 40m people have watched the show so far, and it was #1 worldwide on Netflix. Watch: pic.twitter.com/mIp3cds146

On a personal note, Locke got married in July. She and her husband didn’t want to wait until the end of the pandemic to tie the knot, so they settled for a wedding on Zoom.

“I was very reticent to doing a digital wedding. I couldn’t wrap my head around it. I didn’t understand it,” she said. “I’m very analog, I love having family around, I love having friends, and so it felt like it just wouldn’t be as special, and yet the idea of being in limbo and postponing it indefinitely also didn’t feel well. And so the three of us -- my daughter, my new husband, and I -- got together and we decided you know what, it’s about making the commitment to each other, and so we said let’s just go for it.”

❤️We made space for love. ❤️ ✨ I have loved him since the moment we met. He was heaven sent. But I never imagined this joy. This moment. The gift of this love. And while a backyard wedding quarantined in middle of a pandemic and amidst social unrest was not what we had planned, it was perfect. It was our way to honor our love and the life we are building forward. ✨We pulled clothes from the closet, hung lights in the backyard, and had my dad officiate over Zoom. And when R made his vows to Z my heart leapt from my chest. Right then we became a new family of three. Because as has been said, love “pulls with the force and rhythm of a sea tide, emerging from and receding into mysteries larger than any individual life.” ✨ For now, the honeymoon will wait. For now, celebrating with family and friends will wait. What matters most is the commitment to move through this life hand-in-hand. ❤️ (Thank you @jennytherapy for capturing these beautiful pictures from a safe, masked distance.)

Locke’s father officiated the wedding, and her cousins and sisters virtually attended as well.

“It ended up being incredibly, strangely intimate,” she said. “Across the digital space and time, it just was really beautiful. And for us also being that we are a blended family, and it is a second marriage, it sort of made it very singularly about us uniting and coming together in love. And it exceeded my wildest expectations.”

Locke lost her first husband, Saro Gullo, to cancer. She wrote about their love story and her healing journey after his death in a book titled From Scratch.

She said her past experience with death prepared her for the devastating and enormous amount of loss the world is seeing during the global pandemic.

“I feel like in a lot of ways, those of us who have walked the path of losing someone we loved very dearly, who have walked the path of long-term illness, our lives have kind of in a certain way teed us up to be more anchored in this moment. Now it doesn't mean we're you know, solid in it. I mean I feel shaky every day. But I know that that is simply my awareness of the fragility of life, and I don’t take that lightly,” she said.

When people ask Locke for advice on how to cope with death, she tells them that it’s important to understand how tenuous life can be.

“I’m watching people who have not had the lived experience that I have had, for the first time having to make space, psychically, emotionally, even intellectually, just to think about death and the fact that life is so incredibly fragile and vulnerable. And I have gotten calls, and I have gotten emails, and people asking me my advice in some ways, and to a degree I simply say that being present with the fragility of this is mammoth. It is a big, Herculean effort, especially when we're not used to and are culturally not set up to think about our vulnerability and the fragility of life in that way,” she said.

Many people are thinking about death during the pandemic more than they ever did before it. Locke said now is a good time to prepare for your own passing and to talk to family members about it too.

“I have my advanced care directive. I have a will [and] trust. I mean there’s the practical stuff that most of us don't think about when it comes to our own mortality or the mortality of someone we love,” Locke said. “And of course you know, it’s all in the zeitgeist. Everyone is saying, ‘Get your affairs together.’ This is a perfect time to think about what you would want medically. In a lot of ways, my direct experience has prepared me for both that conversation for myself but also for those I love. I’ve talked to my parents and I’m like, ‘This is what we have to do. This is what the moment is asking of us.’”

Although Locke has had a positive year with the release of Never Have I Ever and her wedding, she said her past has taught her that life can change in a matter of minutes.

“Everything I’ve been through makes me aware that I know that things move and ebb and flow so nimbly, so when these moments, when things line up in beautiful ways, I just know to breathe into it and be in such gratitude for it, because the other thing about it, the other secret about life, is 10 minutes from now, something totally different could be happening,” she said. “And so enjoy it, breathe into it, be grateful for what it is and also be present and ready for whatever might come next, which might be completely different.”