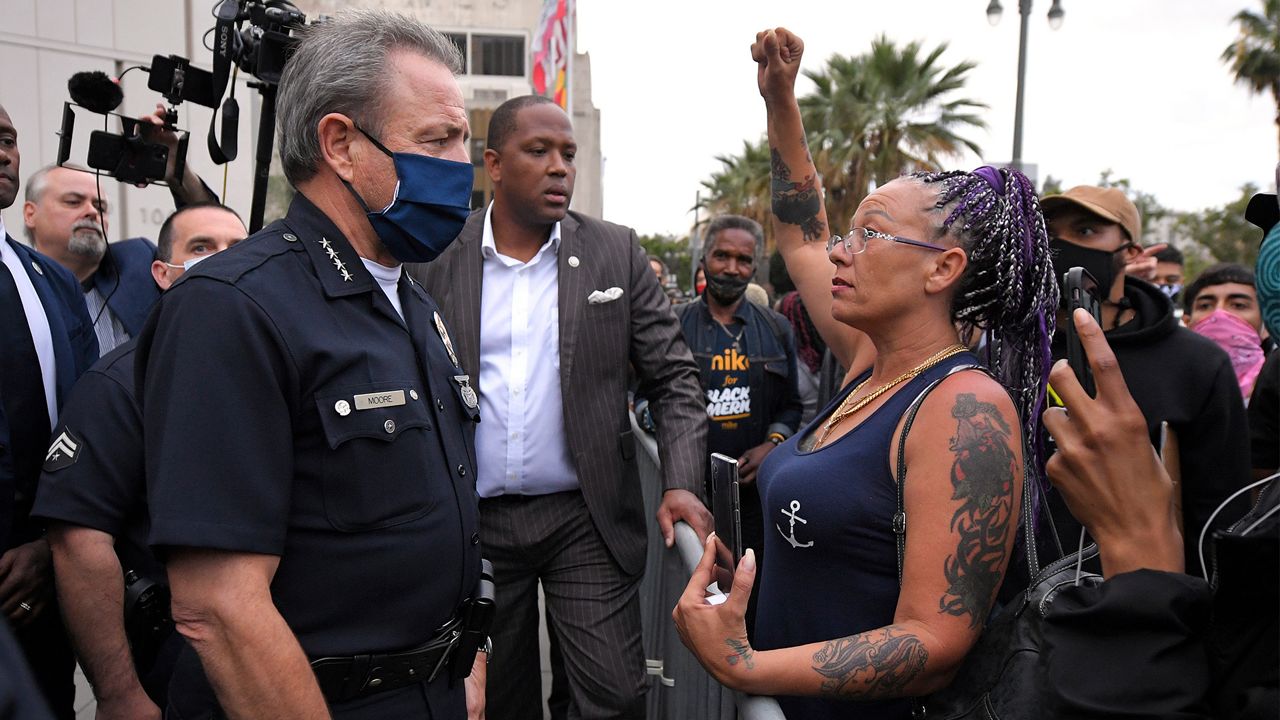 George Zimmerman was acquitted in the murder of 17-year-old Trayvon Martin in 2013. In the days after, Alicia Garza wrote “A Love Letter to Black People” on Facebook and signed it with the phrase “Black Lives Matter.” Garza, along with Patrisse Cullors and Opal Tometi, began conceptualizing how to intuitively organize a movement against police brutality.

Cullors, Garza, and Tometi met a group of people at St. Elmo’s Village, a Black artist community, after three days of protesting the acquittal of Zimmerman. Cal State L.A. professor of Pan-African Studies Dr. Melina Abdullah was in attendance.

Black Lives Matter - Los Angeles was born out of that meeting. Today, Dr. Abdullah is considered one of the co-founders of this organization.

“We spent hours and hours talking about what that meant, meeting in the moonlight, and pledging our commitment to build the movement, not a moment,” Dr. Abdullah said.

“The budget as proposed by [L.A. Mayor Eric] Garcetti allocated 54 percent of the city’s general fund to LAPD in the midst of a health pandemic with an economic fallout that disproportionately impacts Black folks,” Dr. Abdullah said. “As the mayor was slashing virtually every other city department and furloughing 16,000 workers, it became even more problematic. And so we began pushing back, saying fund services not police.”

Regardless, Dr. Abdullah believes too much money is allocated to LAPD. About 25,000 Angelenos completed a survey on city spending, and Dr. Abdullah said residents responded that they prioritize housing, health care, mental health services, parks, libraries, and reimagined public safety, such as restorative justice circles and community care teams.

“Our initial survey results said that the people wanted to spend just 5.72 percent of the budget on traditional approaches to police, which include things like parking enforcement, city attorney, and LAPD,” Dr. Abdullah said.

Minneapolis disbanded its police department after four former police officers were involved in the murder of an unarmed Black man, George Floyd. San Francisco officials announced that police officers will no longer be dispatched for non-criminal activities. L.A. City Councilman Herb J. Wesson, Jr. introduced a motion to “replace LAPD officers with unarmed, non-law enforcement agencies who will be responsible for responding to non-violent calls for service.”

Today I, alongside my colleagues, will introduce a motion to replace LAPD officers with unarmed, non-law enforcement agencies who will be responsible for responding to non-violent calls for service.

To Black Lives Matter organizers and supporters, “defund the police” means creating a new and improved version of public safety.

“We're not saying abolish public safety. We’re saying that public safety, especially for Black people, is not police,” she said.

Police are employed for many tasks that Dr. Abdullah said “they have no business doing.” During a recent trip to City Hall, Dr. Abdullah said she and others were met by armed police officers who took their temperature as a safety precaution against COVID-19.

“That doesn't even make sense. Why wouldn’t you have a health care worker do that?” she asked.

Dr. Abdullah said that she was raped when she was young but never reported it because she didn’t want to talk to a police officer.

“I didn't want to be approached by a man with a gun. That would have been re-traumatizing,” she said. “As a teenager, as a young adult, I didn't know what else to do, and I never talked about it. I buried it. I just told my mother about it maybe five years ago. I never spoke of it again. And I think that we can think of, well how would a rape survivor want to be approached after her rape? I don't think policing is the answer.”

"Training means more money for police. The world is saying, 'We don't want to give our money to police any longer.'"@DocMellyMel of @BLMLA said people want to put their money toward a new and improved version of public safety.

"We imagine something different," she said. pic.twitter.com/5AIorDjl0z

Dr. Abdullah said LAPD officers should not be involved in the plans to restructure the police department.

“We want to be real clear: We don’t think that a system that is fundamentally designed to produce the outcomes that it does should be in charge of figuring out its next steps,” she said.