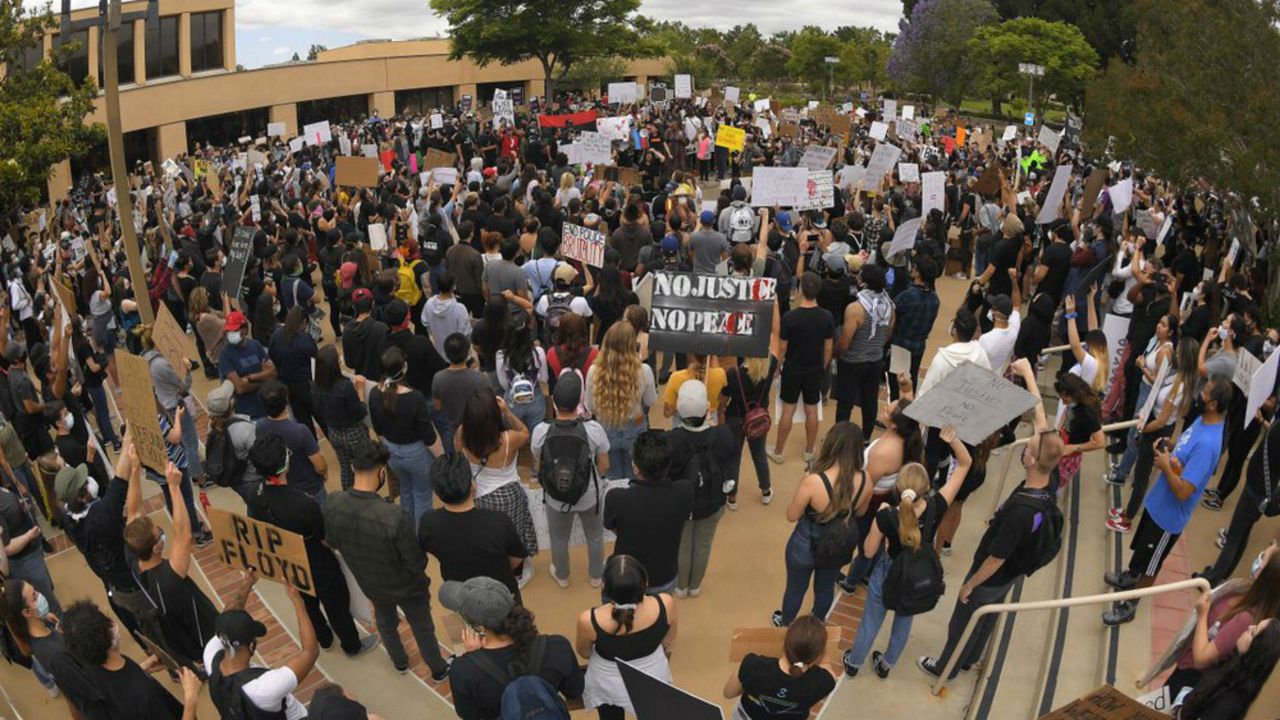 Demonstrators gather at the Simi Valley civic center during a protest, Saturday, June 6, 2020, in Simi Valley, Calif. over the death of George Floyd. Protests continue throughout the country over the death of Floyd, a black man who died after being restrained by Minneapolis police officers on May 25. (AP Photo/Mark J. Terrill)

Retired LAPD Sgt: Officers Should Be Empathetic To Protesters

Friday marked the ninth day of protests in Southern California after George Floyd, an unarmed black man, was killed by former Minneapolis police officer Derek Chauvin while three other officers watched. The killing of Floyd was the tipping point for many protesters who are calling for police reform in the U.S.

While most Black Lives Matters protests have been peaceful, some were tainted by looting, vandalism, and arson.

On Monday, Chief Moore said George Floyd’s death was on looters’ hands as much as it was the officers who killed him. He quickly apologized for these remarks on Twitter: “While I did immediately correct myself, I recognize that my initial words were terribly offensive. Looting is wrong, but it is not the equivalent of murder and I did not mean to equate the two. I deeply regret and humbly apologize for my characterization.”

While I did immediately correct myself, I recognize that my initial words were terribly offensive. Looting is wrong, but it is not the equivalent of murder and I did not mean to equate the two. I deeply regret and humbly apologize for my characterization.

“Sometimes there's a Freudian slip, and sometimes people say things publicly that's really in their heart, and then they realize, ‘Oops. That’s not the best thing to say right now,’ because it only exacerbates the situation,” Dorsey said.

While Dorsey said she couldn’t speak to “Mike’s heart,” she said police officers are sometimes jaded due to their stressful line of work.

“We tend to be a little caustic sometimes,” she said. “I don't want to explain it away and minimize it, but I think some of it is probably coping mechanisms for us; you know, dark humor. We’re human too, and we’ve got to figure out a way to deal with this thing that we're seeing, that we see day in and day out, and not lose our minds in the process.”

Dorsey believes that police departments need to take “affirmative action” to get rid of bad cops.

“Listen: They knew who [former officer Derek Chauvin] was in the Minneapolis Police Department. This is a tenured officer; 19 years with 18 personnel complaints,” she said. “The other officer who stood there, Tou Thao, had been involved in an incident where he knocked the teeth out of a man's head, and the city had to settle for $25,000. And so when you know that these kinds of abuses occurred, the question that begs to be answered is: Why didn't you do something sooner? Mr. Floyd may very well be alive today if Chauvin was not in that department.”

Dorsey said Chief Moore doesn’t need to do anything differently as far as dealing with Black Lives Matter protesters.

“LAPD officers are the best trained, I believe,” Dorsey said. “The only thing that I would just do would be to encourage my officers to be professional, be dignified in your dealings with folks, treat them the way that you would want anyone to treat a family member should they be caught out on the streets after curfew, and show a little empathy, a little compassion, because at the end of the day, really what people generally want is just to be respected in the moment," she said. “You can get so much further down the road if you are just respectful and dignified."

L.A. County is no longer implementing a curfew since protests have been mostly peaceful.

Dorsey is the author of Black and Blue, a novel about her 20-year career with the LAPD as a black, female police officer. While in the field, people have called her names and stereotyped her because of the color of her skin.

“As a police officer, when I'm in that uniform, first, folks who look like me see me my skin color, and sometimes people expect me to comport myself in a way that is more aligned with their thinking... because they assume that because I do this thing for a living that somehow I'm more aligned with the uniform, with the entity, than I am with what's actually going on in the community.”

Dorsey said being a police officer is just one of her three identities.

“First, I’m a black woman. Second, I'm a mother of four black men. And then third, I'm a police officer,” she said. “And so I'm going to discharge my duties professionally. I do it with empathy because that's just who I am, because I'm a mother, and because George Floyd could have been my son, my brother. I understand the angst behind what communities are feeling, not only in Minneapolis but across the nation, when errant police officers -- and I believe them to be in the minority -- do something that's contradictory to our training, which results in the death of someone.”

"First, I'm a black woman. Second, I'm a mother of four black men. And then third, I'm a police officer."

Tonight on Inside the Issues, we talk to retired LAPD officer @sgtcheryldorsey about the "angst" communities are feeling right now.

"George Floyd could have been my son." pic.twitter.com/sjmy8M0a2j

When dealing with protesters, Dorsey encourages officers to slow down, take a deep breath, and act with a cool head.

“Most times, unless it's a life-threatening-right-now situation, there is no real need for urgency. And so I think it makes better sense to err on the side of caution and be sure that the person that you may be directing your energy towards is the right person, is the perpetrator, and not the owner of a business who's there just merely trying to protect their business.”

"You can get so much further down the road if you are just respectful and dignified."

Officers often put themselves in harm’s way to protect civilians.

“I think they're doing what they were trained to do, and certainly our safety and well-being is tantamount,” Dorsey said. “We want to make sure that we are in a position to be a help, not only to the community, but you are partners to the officer who is standing left or right of me. If I'm taken out, if I'm injured, I'm of no use to my partner.”

Dorsey said police officers get nervous, too, when there’s conflict in the community.

“I was there on the LAPD during the 1992 Riots, and whenever there’s consternation between the community and the police department, we feel that same angst because when we're not the police, we’re the community,” she said. “The majority of police officers [understand] that whatever it is that [the community is] feeling, whatever emotions they are displaying that seem to be negative, has really little to do with us individually and more about their circumstance and sometimes about the entity that we work for, the police department.”

Dozens arrested for Burglary in Van Nuys after looting a drugstore. Many of them armed with large hammers.

Our job is to facilitate peaceful protests — and to arrest criminals. pic.twitter.com/bZqIITgSgl

These negative emotions are the result of decades of violence toward black people by police officers.

“I think part of the problem is that my community feels like our cries, our pleas, for help [and] our desire for accountability has fallen on deaf ears.”